If you want the biggest SUV on the market with better fuel efficiency than a Honda Pilot, the Suburban diesel is in a class of its own.
Here we are with the 2021 Suburban and indeed this aluminum, 3.0-liter in-line 6-cylinder Duramax turbo-diesel is an attractive option for high-mileage drivers.  Equipped with 4-wheel drive, this Suburban is rated at 20mpg city and 26mpg highway.  And as is the case with these types of engines it’s all about the torque and this one produces the same 460 pound-feet as the mighty 6.2-liter V8 but does so beginning at only 1,500RPM.  It’s even paired with start/stop engine technology that’s as smooth as butter.  And you can barely even tell that it’s a diesel under the hood.

Earlier this decade, pundits predicted that a gallon of gas would cost more than $5 a gallon by now. Well, they were wrong. Really wrong. And so the SUVs which were declared dead and almost buried have experienced a boon like never before. Case in point the all-new 2021 Chevy Tahoe and Suburban. https://testdrivenow.com/2021-chevrolet-tahoe-and-suburban/

TDN NEWS: CHEVROLET OFFERS MIDNIGHT EDITION TAHOE AND SUBURBAN Chevrolet announced that it is expanding its popular specialty models to include Midnight Editions of its segment-defining Tahoe and Suburban full-size SUVs. With years of heritage to build on, Chevrolet continues…

Posted on September 16, 2013 by TestDriveNow.com 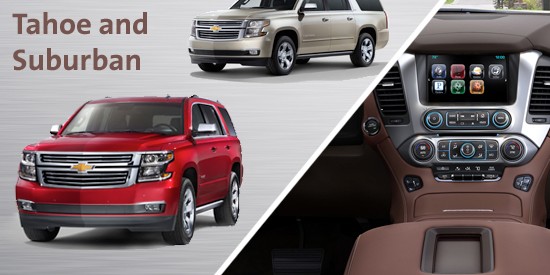