2014 Bentley Continental GT V8 S Convertible Review:   Top-down driving in a Bentley on a gorgeous summer afternoon; it simply doesn’t get any better than this.  But this isn’t just another GTC model.  This is the new for 2014…

Crewe/London –Bentley Motors today releases the first picture of the Bentley SUV, due to hit roads in 2016. It will be the most luxurious and powerful SUV on the market, setting it apart from any other SUV, true to the…

Geneva, Switzerland – Bentley unveils a suite of luxury specification updates to its Continental family of grand tourers at the Salon International De L’auto 2014. This is headlined by enhancements to the styling, power, torque and performance of the flagship model,… 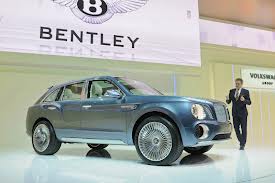 Bentley Motors confirmed that it will proceed with the development of an entirely new car line: a luxury SUV. Representing the company’s fourth model, the SUV will join the Mulsanne, the Flying Spur and the Continental GT in the Bentley…