Posted on February 1, 2021 by TestDriveNow.com

2020 Toyota Avalon TRD Test Drive & Review By Car Critic Steve Hammes. When you think of an Avalon, the last thing that comes to mind is a sports sedan, right? Well, hold on for a minute. The 2019 redesign did away with its AARP Card requirement by taking Toyota’s flagship sedan in a decidedly sportier direction. And now, the Avalon has gone full on TRD to produce something surprising and a little naughty.
MSRP as-tested: $45,835

For its fifth generation, Avalon received an all-encompassing makeover by Toyota’s U.S.-based design, engineering, and manufacturing entities at Calty Design Research Inc. (Calty) in Ann Arbor, Michigan; Toyota Motor North America Research and Development (TMNA R&D) in Saline, Michigan; and Toyota Motor Manufacturing, Kentucky, Inc. (TMMK) in Georgetown, Kentucky, respectively. Spearheaded by Chief Engineer, Randy Stephens, and Calty President, Kevin Hunter, the brain trust masterminded an Avalon that represents multilateral progressiveness – for itself, its diverse group of drivers, and, for Toyota.
The teams minded two keywords throughout their development paradigm: Authenticity and Exhilaration. Both were applied in every area of Avalon’s sophisticated essence, and throughout the four available grades: the athletic XSE (all-new) and Touring, as well as the more opulent XLE and Limited. HV grades include XLE, Limited, and XSE. 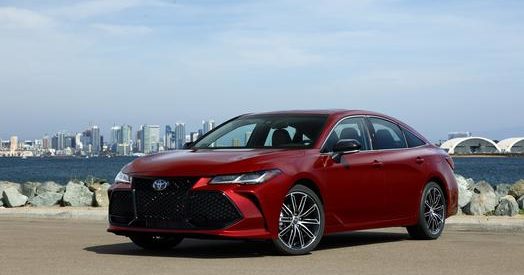 Toyota Avalon Touring 2019 Review by Auto Critic Steve Hammes Ah…I remember my days in Avalon. It was a time when you needed to show your AARP card in order to get one of these flagship Toyota sedans. It was…