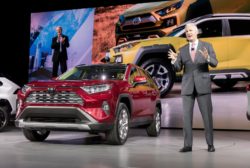 The all-new 2019 Toyota RAV4 makes its global debut at the 2018 New York International Auto Show. As the original small SUV that created the segment, RAV4 has taken its guests on countless adventures for over two decades, earning the current rank of the best-selling Toyota in the country. For its fifth generation, the all-new RAV4 debuts more powerful, roomier and fuel-efficient than ever before. RAV4 will be showcased alongside Toyota’s full vehicle lineup of cars, trucks, SUVs and future mobility vehicles. 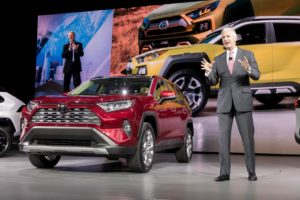 The 2019 RAV4 possesses an entirely reimagined design and performance, thanks to the implementation of its new Toyota New Global Architecture (TNGA) platform and two new powertrains. With the platform comes a Multi-Link Rear Suspension, and an available Toyota-first Torque Vectoring All-Wheel Drive with Driveshaft Disconnect system giving drivers improved handling. Multi-Terrain Select is also available for guests who want to take their adventures off the pavement.

A new hybrid grade makes its debut on RAV4: XSE Hybrid. RAV4 XSE Hybrid is the sportiest of all grades and is expected to achieve class-leading fuel economy.

Also on display, for the first time ever, is the 2019 Yaris, replacing the 2018 Yaris iA. Featuring a redesigned sport-inspired front grill, the new Yaris is equipped with a standard low-speed pre-collision system, and a standard 7.0-inch touchscreen multimedia system with voice recognition, remote interface, steering wheel controls and Bluetooth connectivity. LED automatic headlights are also available. It has a highway rating of up to 40 EPA MPG. In addition to L and LE grades, the 2019 Yaris comes in a new XLE premium grade, featuring leather accents and a leatherette interior.

The show also features the pulse-pounding, heart-racing TRD Pro Series for its next generation of off-road dominance. The series comes to New York after its debut at this year’s Chicago Auto Show. For 2019, Tundra, 4Runner and Tacoma will all feature high-tech Fox Internal Bypass Shocks and a host of impressive off-road equipment tuned and designed by the engineers at Toyota Racing Development (TRD). The Tacoma TRD Pro, for example, offers an available TRD desert air intake, and the Tundra TRD Pro is fitted with Rigid Industries fog lights and new BBS wheels. The 4Runner TRD Pro flaunts a new TRD roof rack.