As this current generation Ranger nears the end of its lifecycle Ford is infusing it with heartier off-road chops intended to make you Tremor. Consider this an appetizer to the upcoming Ranger Raptor. 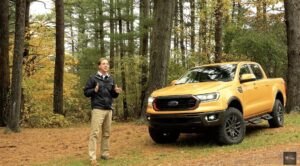 Just as Ford is preparing to reveal the next-gen Ranger due in 2023, I’m running through the mud in this Cyber Orange Ranger Tremor and loving every minute of it. 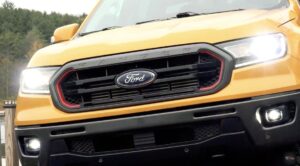 It’s been a couple of years since I’ve driven a Ranger – which I deemed the best small pickup on the market when it returned to the U.S for the 2019 model year after having been sold overseas in the interim.  So how’s it holding up?  Remarkably well. 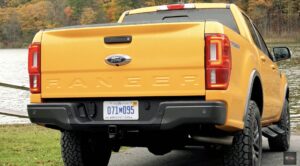 All week I’ve been comparing it to the new Nissan Frontier I recently tested and I have to say this Ranger – even at its advanced age – isn’t afraid of anything that Nissan is throwing at it, especially with this lavishly equipped and off-road ready Ranger Lariat with the Tremor Off-Road Package. 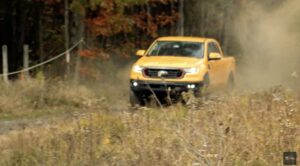 Powered by a 2.3-liter 4-cylinder turbo producing 270 horsepower and 310 pound-feet of torque, the Tremor Off-Road Package is priced at $4,290 and is available on XLT and Lariat grades exclusively in the SuperCrew 4X4 configuration. 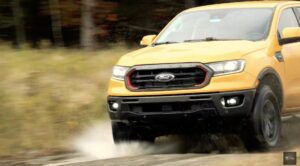 Following the off-road oriented Super Duty Tremor comes this Tremor package for the Ranger.  It gives owners a truck with even more capability, taking it several notches beyond the FX4 Package.  A lifted suspension provides nearly another inch of ground clearance which combined with the new 32” Grabber tires improves the Ranger’s off-road metrics. 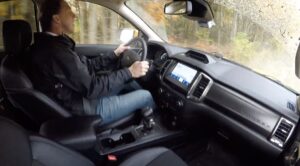 FOX shocks with external reservoirs at the rear and hydraulic rebound stops keep things comfortable even over severe terrain.  A steel front bash plate, skid plates, 2 new recovery hooks in the rear, a locking rear differential and a Terrain Management System round out the package. 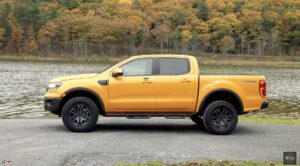 Even the traction control system has been recalibrated for improved acceleration while driving on loose surfaces. 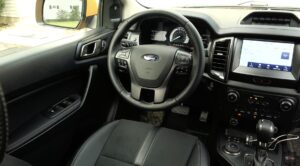 Inside, you’ll find a bank of auxiliary power switches to control accessories such as a winch and lights and special Tremor accented seats. 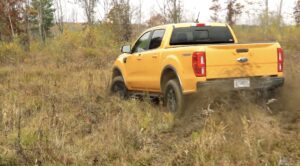 Though I think this engine – once found in the Focus RS – is a strange choice for a pickup, it’s very lively and packed with power. 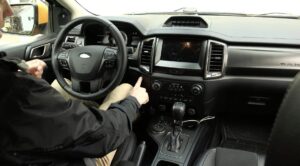 But that’s not really what you want when doing technical off-road driving so Ford includes a number of Terrain modes, using electronic means to fine-tune the powertrain for a more linear, controlled torque delivery. 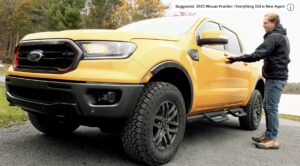 You’ve got a rear locker, slow-speed cruise control, and a dial for 4-high and 4-low gearing, though it’s a shame there’s no Auto setting for on-road driving. 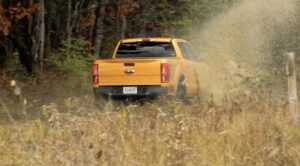 And out here the Ranger feels unbeatable…I really wasn’t expecting this level of nonchalant performance but whether its crawling along through rocks and water or slamming it through the deep mud the Ranger never feels nervous.  The shocks keep occupants unruffled a la the mighty Raptor and the jacked up body provides nearly 10” of ground clearance with a 31 degree approach angle. 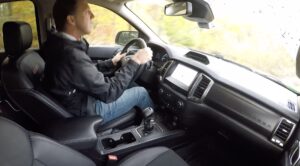 It’s an absolute blast when driving for fun and as you transition back to actual roads the Tremor ride feels tightly sprung but never trucky.  Though not as pristinely smooth as the new Frontier in this regard, even with the Tremor Package this is a comfortable daily driver with a high degree of coddling: the leather seats with suede inserts, the B&O sound system, 2 USB ports in the rear, rubber floor liners, heated seats, adaptive cruise control, and navi give an F-150 aura.  Now, it may not look super-modern but this cabin has held up extremely well. 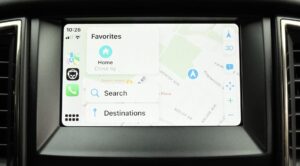 Other than the small screen with the old SYNC system and the hollow sounding doors, the Ranger is still a top notch competitor. 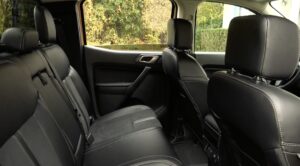 Now the price of this one is $48,755 – certainly not cheap – but it’s a fully loaded top of the line Tremor.  A more plebeian XLT Tremor starts at $42,745.  It can tow 7,500 pounds with the optional trailer tow package – which by the way deletes the aforementioned rear tow hooks -, has a 10-speed automatic transmission helping to keep the Tremor’s gas mileage reasonable at 19mpg on regular and a 5’ lined bed that can haul over 1,400 pounds…though one without a damped tailgate. 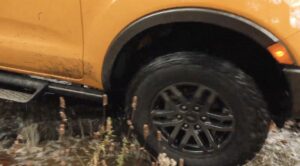 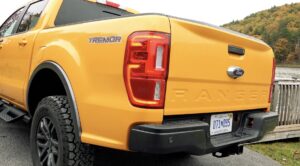 This is one rugged truck with a soft side that satisfies on a number of fronts so if you’re in search of an off-road rig that still fits in your garage and is ready to go right out of the box, the Ranger Tremor would be my first choice.