Toyota’s elder statesman has a few new tricks up its sleeve for 2018. This is the first-ever Sequoia TRD sport.

It’s been a decade since this 2nd generation Sequoia was introduced, built in Indiana as a structural twin to the Tundra pickup…another one of Toyota’s body-on-frame geriatrics.  From a sales perspective, it’s at the bottom of the segment and within the brand, only the astronomically priced Land Cruiser sells in lower numbers on the non-car side.  But in this SUV world, Toyota has reason to believe that a special edition can reinvigorate sales.  And that’s how we’ve arrived at this Sequoia TRD Sport; short for Toyota Racing Development. 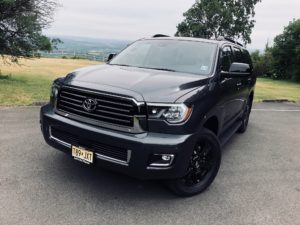 Introduced at the 2017 Chicago Auto Show along with the Tundra TRD Sport and RAV4 Adventure, this one is slotted 2nd in the Sequoia’s 4-trim lineup, priced from around $56,000.  It’s available with or without 4-wheel drive, and swaps out its original equipment shocks for Bilsteins designed for a firmer, well-managed ride with improved steering response and less harshness in the rear, TRD sway bars for flatter, more stable cornering, 20” black sport wheels, black mirror caps, darkened tail lights and special badging.  More TRD bits are found inside and additionally, mine has the Premium Package introducing leather, power front seats with heating, a power 3rd row, and Entune with navigation.

As-tested you’re looking at $59,840. For 2018, all Sequoia models come standard with LED headlights and fogs and a new front fascia.  The updates certainly help the Sequoia’s cause and the TRD Sport treatment gives it a credible street truck look.

Since 2013, the Sequoia’s sole engine is a 5.7-liter V8 producing 381 horsepower and 401 pound-feet of torque paired to a 6-speed automatic transmission. That’s not helping fuel economy here, where this i-FORCE engine as it is known, is the least efficient pickup truck engine on the market, rated at 14mpg in combined driving. The EPA ranks its Greenhouse Gas Emissions as a 1 on a scale of 1 to 10.  It can tow 7,100 pounds and trailer sway control and a tow mode are included but that’s still less than competitors such as the Nissan Armada and Chevy Tahoe.

As one of the brand’s senior citizen, there are a number of areas where the Sequoia shows its age like having to use this key to get in and get it started, the tiny little navi screen positioned a million miles from the driver, the non-power liftgate seemingly made of lead, and a V8 engine whose fuel economy is about as bad as it gets.

All of that begin said, the Sequoia does its family hauling duties right. Every seat is a good one and as painfully slow as they are, the power folding 3rd row seats are a nice touch, the 2nd row seats are easy to tumble and the bumper provides a comfortable seating area. I’ve had family in town this week and the Sequoia is the perfect match for driving people around in comfort.  Step-in is high but the Sequoia is so big that there’s lots of room for maneuverability once inside.  The center console bin is equally as enormous.  And the power rear window is something you don’t see much anymore.  USB ports are few and far between…this is it.

To its credit the Sequoia is incredibly spacious and possesses the best 3rd row seat on the market.

A double wishbone rear suspension and a wide opening make for a great 3rd row…hands down as good as it gets in terms of adult-sized proportions.  There’s also a handy foot activated slide feature to assist in getting out.

The Sequoia’s power is more than you’ll need, it can tow 7,100 pounds, has nearly 10” of ground clearance and legit room for 7. The TRD treatment tightens up the handling and provides a more sophisticated ride quality but the Sequoia is still all big truck from behind the wheel with a little jiggle in its body and some loosey-goosey steering. The Platinum grade with its air springs provides the best ride quality. Other than the abysmal gas mileage I kind of like the easy going nature of how it drives and feels from behind the wheel.

Why anyone would pay twice as much for a Land Cruiser is a mystery to me. Out of all of Toyota’s old guys, this one is clearly my favorite.  A redesign is still expected to be years away, but the Sequoia remains a viable alternative especially for those who often carry lots of people. It isn’t new but it still satisfies in a big, classic SUV style.