You want to know a secret? I really don’t love driving anymore.  Now, don’t get me wrong.  In the right car on the right road it’s still a favorite pastime of mine but more often than not, a monkey could do the kind of driving I face; crawl, brake, repeat.  Traffic congestion is a huge issue invading even smaller cities so I’m all-in on the future of autonomous cars.  And Cadillac’s Super Cruise is the closest thing to a self-driving car I’ve experienced yet. 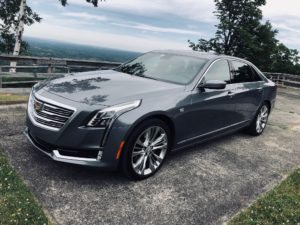 Two years ago I tested the first CT6…Cadillac’s large flagship sedan priced anywhere from the mid-$50ks to nearly $90,000. It wasn’t all that I thought it would be, and in that regard, my opinion hasn’t changed much this week.  My biggest complaint: the sport-tuned ride quality that despite the Magnetic Ride Control shocks never gets soft and luxurious enough.  I appreciate the elegant, understated appearance and the amazing rear seat accoutrements but this CT6 has an ace in the hole that makes every other feature a secondary story.  It’s called Super Cruise and it’s available on the Premium Luxury trim as an optional $5,000 package and standard on this range-topping Platinum trim.

I’ve shown you a bunch of cars in varying price ranges with semi-autonomous features including ones that allow you to take your hands off the wheel momentarily while the car keeps itself in the lane and maintains a set speed and safe distance from the car in front.  But having to touch the wheel every few seconds is a drag and some of these cars are better than others at keeping the car from zigzagging between the lines.  But this Super Cruise feature is more advanced utilizing LIDAR – a radar-like system that employs laser light to measure distance to a target, map data, cameras, sensors and GPS.  Though Cadillac believes they can eventually expand its use to rural and other more complicated roads, for now Super Cruise only operates in specific conditions.

First off, Super Cruise only works on limited access highways meaning no cross streets just exit ramps. The car determines where it will work, not you.  Yes, you’ve got to be in the driver’s seat and paying attention – this camera right here makes sure of that and if you’re not you’ll be warned, first visually and then audibly and if you’re stubborn enough the car will come to a complete stop and call OnStar.  Once the car is centered in the lane and your speed is set, the green light tells you the system is ready. And then, it’s just a press of this button and you’re now driving hands and feet free.  It works great – it doesn’t make me nervous.  I love it.  It allows me to relax and better enjoy my environment.  The only bummer is than unlike in the Mercedes models, it doesn’t change lanes automatically.  You still have to take over for that.

This is the future so embrace it and frankly, with our country’s outdated and overused infrastructure, it’s technology like this that’ll alleviate some of the horrendous congestion.

The system does a wonderful job of keeping the car centered in its lane unlike some other systems I’ve tested. And right here, I’m going to make a lane change.  I’m now over in the center lane – it goes blue right here in the meanwhile – once it goes back to green, once the car is centered in its lane you’re ready to go back to the hands-free driving.

This fully loaded CT6 with all-wheel drive, the 404 horsepower twin-turbo V6 and Platinum level features checks in at $89,290; a breathtaking price. Paired with an 8-speed auto, it’s not the smoothest power delivery. Again, it seems as though Cadillac baked in an unnecessary level of sportiness here that doesn’t satisfy or belong.  Rear wheel steering aids in low speed maneuverability and high speed stability, there’s a sound enhancer for more engine in the cabin and 400 pound-feet of torque on demand.  But for me, I’ll take one of the rear seats.

My previous CT6 test-drive was not of a Platinum model so it didn’t have these very luxurious, power-operated, massaging, heated and cooled rear seats, nor did it have this dual screen entertainment system and frankly I’d rather be back here than in the driver’s seat.

The massage is excellent in all seating positions. And there’s a lot of good tech in here like the rearview camera mirror, configurable displays and super easy to use infotainment with wide ranging connectivity.  There’s also a nicely placed wireless charging pad but FYI it is not compatible with iPhone 8.  And the 34-speaker Bose Panaray sound system is spectacularly immersive.

Super Cruise is an amazing step along the fully autonomous path and GM will eventually expand its use to all of their vehicles but it’s going to take some time. The CT6 itself doesn’t feel nearly as special, at least not at this price.