What a great time to be an SUV brand. Such are the good fortunes at Land Rover where their growing lineup is ripe for countless variations of 4X4s including this gorgeous piece of art – the all-new Velar.

Land Rover’s product portfolio is marketed under 2 separate lines: Discovery for midrange luxury shoppers and Range Rover for the upper end. And the Velar slots both pricewise and dimensionally between the entry-level Evoque and the athletic Sport in the Range Rover line.  Having just gone on sale late last year, the Velar has already taken over the top spot in Land Rover sales.  It’s resonating with consumers and it’s easy to see why.  It’s dubbed the avant-garde Range Rover and it’s oozing with sophisticated personality.

I don’t usually spend much time speaking about design, because you like what you like and vice versa so what’s the point. But the Velar’s stance is so strikingly different and concept-like that I think it’s worth mentioning.  It’s really a stunning SUV. 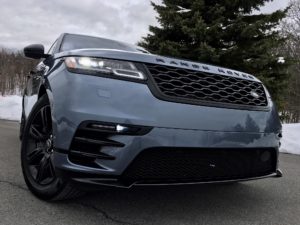 Long and lean with an astonishingly squat appearance with the air springs fully depleted, you could make an argument that this is the sexiest SUV ever made and you’d get no argument from me.

Even though it looks too pretty to take down the trail, this Velar clears almost 10” with the air suspension fully jacked plus this one has the sophisticated Terrain Response 2 system and a locking rear differential. So there’s no reason you can’t go for it.

Though you can grab a base Velar with a 2.0-liter turbo and coil suspension for around $50 grand this is the up level R-Dynamic model with the HSE specification pack, optional supercharged V6, standard air suspension and over $12,000 in extras for a total MSRP of $90,170…so watch yourself. The Byron Blue paint has drawn praise all week and the Velar turns heads with every mile.  From the moment the flush door handles pop out you’re on notice that the Velar is something unique.  The next attention grabbing bit is the new Touch Pro Duo infotainment system, debuting here on the Velar.  From the steering wheel mounted controls that change depending upon menu selection to the 2 rotary controllers that also change with screen choice, the Velar feels like it’s still in concept form.  The top touchscreen with its changeable angles is still a bit of a mess in that it’s simply not intuitive.  Plus, there continues to be no real smartphone integration, just the company’s inControl apps that doesn’t give me access to the features I really want.  The bottom screen however is where it’s at.  Not only does it look particularly cool but switching through drive modes and accessing seat and climate settings is done with relative ease.  Navigation is also projected in the driver information display but if I was spending $90 grand I would also spend another $970 for the head-up display, especially in a vehicle that moves as quickly as this one.

Speaking of which, this V6 delivers its power instantaneously and when the 8-speed transmission is in sport it feels very quick. 0-to-60mph happens effortlessly and without much of soundtrack in only 5.3 seconds.  I averaged 18mpg on premium, which is exactly the EPA’s city estimate.  No V8 offered here; that’s reserved for the Sport but this motor won’t leave you wanting.  But what’s most exciting about the drive is how light on its feet the Velar feels when hustled through turns aided by torque vectroing with spritely exits made even more satisfying with the optional active rear locking differential.  And with Land Rover’s new nomenclature, you’ll never forget how much horsepower your engine makes.

The seats are living room comfortable, the cabin is Lexus quiet and the supercharged V6 is ready to go whenever you are. Switch over to Dynamic when you desire sports sedan-like handling where the Velar’s aluminum intensive body keeps the weight down and the agility high.  But on these optional 20” tires, the ride is pretty firm, even in the Auto setting, and this tester drives with a tramlining effect that requires more attention to the steering wheel than is normal.  Still in all, I could drive the Velar all day.

With over 26” of water wading depth, over 5,500 pounds towing and 7 drive modes, this Velar truly lives up to its Dynamic moniker.

I like how certain Velar functions are automated. As soon as you get in the sunscreen opens and then a little while down the road your massage begins.  But some of these futuristic controls don’t work as designed and the amount of time it takes to get in, get situated and get going is annoyingly long.

That’s one angle that continues to befuddle Jaguar Land Rover. I want all of these electronics to boot up immediately – not have to sit in the driveway and  wait to make my selections.  Plus, the driver information display menu is laggy at best, sometimes repeated button pressing resulted in nothing at all.

From the backseat rearward the Velar skews towards the smaller side of midsize, not too dissimilar to that of a Jeep Grand Cherokee. The outboard seats offer decent legroom and have power recline but this middle spot is tough.  There is quad zone climate control and heated seats but no USB ports back here…again, another option that wasn’t selected.  The cargo area includes bag hooks, remote seat levers and controls to lower the vehicle for easier loading.  The center console is very small and houses 2 USB ports.  At night, the entire cabin is a spectacular light show, controlled by you and changeable at a whim; a perfect atmosphere for listening to the unbelievable 23 speaker Meridian sound system.

Land Rover is on a roll and with a lower priced Defender line coming soon, I expect more of the same.