Just because you need a new crossover doesn’t mean you need to relinquish driving pleasure. 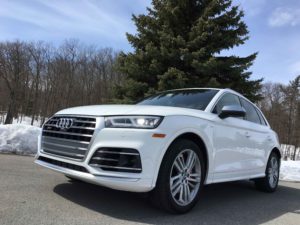 Audi has been offering a hot-rod version of their popular small SUV now for a number of years and this all-new, second-generation SQ5 packs increased power, a new turbocharged V6 and a design that pulls it more in line with the Q7.

Did you know that the Q5 is the best-selling Audi, pacing at nearly double the rate of the A4 and Q7? So to say it’s important that Audi gets its successor right is an understatement, especially facing increased competition.  Pricing for the compact-sized Q5 starts at $42,475 including destination but if you’d prefer the liveliness of a V6, the authenticity of the original quattro all-wheel drive system, available adaptive air suspension with off-road settings and all of these little high-performance touches, it’s the SQ5 you’ll want.  Priced from $55,275 its price premium is not insignificant, but Audi S and even more so RS models cater to the driver who wants more and is willing to pay for it.

It’s been about 3 ½ years since I last drove one but I do remember loving the gusto from its supercharged engine and superior driving dynamics. This one still uses a 3.0-liter motor but it’s turbocharged instead, tuned to make an identical 354 horsepower with 20+ pound-feet of additional torque.  The automatic transmission uses identical ratios for gears 1 through 8 as those before but with a slightly more aggressive final drive.  The wheelbase is a little longer, ground clearance of over 8” is a little higher but dimensionally this SQ5 is pretty much the same.  Cargo room with the rear seats up is down a little and with them folded is up 3 cubic feet.  It weighs 22lbs. less and mashing the gas pedal takes the same 5.1 seconds to reach 60mph.  So on the surface, it seems as though Audi’s played this redesign pretty safely. But it’s in here where they’re letting it all hang out.  Magma red, Nappa leather seats with diamond stitching and the Audi virtual cockpit substantially raise the level of modernity and elegance in this SQ5.  Both are optional as is the S Sport and Driver Assistance packages, Carbon Atlas inlays, and Dynamic Steering for an as-tested price of $67,175.

When I first got the SQ5, I admit I was a bit disappointed. I couldn’t quite put my finger on it but it just seemed as though the SQ5 lost a little bit of its mojo.  But as the week has worn on, that initial assessment has largely turned into a greater appreciation of what the SQ5 is.  Plus, I can’t ignore the fact there are a set of winter tires on here which definitely ding the dynamic handling that I’m looking for.  The air suspension is definitely a nice addition providing a velvety-smooth ride.  And, I can tell the dynamic steering would be more beneficial with a set of higher performing rubber.  The virtual cockpit and MMI system are truly awesome despite the fact that this still isn’t a touchscreen.  Now, it is pricey but the SQ5 is definitely growing on me.

I prefer the tougher, more SUV-like stance of the original. I miss that higher seating position from behind the wheel.  Though I must say it’s nice to be able to raise and lower the body depending upon the type of driving.  For example, the off-road setting feels substantially higher and the cargo area can be lowered from the back.  It’s all connected to the Drive Select system so it flexes depending upon mode.  I’d also take a more immediate and linear supercharger over a turbo because this one and its over 20 psi of boost can be a little touchy.  That being said, it’s fun to drive, quick, and able to deliver the power you crave at higher rpms.  The tiptronic includes downshift rev matching for that little blip of the throttle as you brake or lift off the gas and the paddle shifters are a joy to use. The engine sounds also appropriately adjust to the style.  The Dynamic Steering system is also reacts to the drive select setting and vehicle speed, adjusting the actual steering ratio to improve straight-line stability at higher speeds while utilizing more direct steering for easier maneuvering at lower speeds.  But on a set of 20” Pirelli winters – which I appreciate up here, by the way – I did not experience the full breadth of this feature nor the rear-biased quattro system.  As fitted, the dry-road handling was less than impressive.  But the sport rear differential does provide a nice bite coming out of the turns. Blended with a forgiving ride quality, willing powertrain and confident off-roading, my personal driving enjoyment increased with every trip.

The cabin is very nice. Quiet and techy, it’s a place the family will feel comfortable.  With Google Earth mapping, the brilliant switchable driver displays, and impressive infotainment features the SQ5 is on point in terms of advanced design.  There is room for improvement though; the heads-up display is easy to read but lacks depth of information, the touchpad will never be as easy to use as a touchscreen, the center console is tiny, the top view camera system doesn’t have its own button for activation and it doesn’t display longitudinally, there are no USB ports in the rear, and the front seats aren’t as soft as I’d like.  Also, performance wise, the SQ5 no longer separates itself as far from the Q5 as it used to.  Gas mileage improves to 21mpg in combined driving on premium.  It doesn’t grab me the same way the initial SQ5 did but it still remains  a compelling choice in the small SUV segment.