It was only this past summer that I first drove the Bentayga – Bentley’s critically acclaimed SUV. But at that point, an updated model had already been announced. So here I am again, this time with the new Bentayga featuring freshened styling and a much welcomed tech boost. 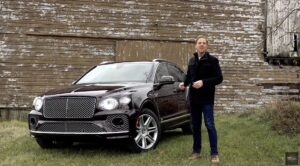 If you’re watching this then at some point you’ve fantasized, like me, about owning a car you can’t afford.  Perhaps a Bentley.  Now, thanks to my job I’m lucky to have driven many of these British-born beauties over the past 20 years but never did I imagine way back at the beginning while driving around in an Arnage that Bentley would ever be involved in the SUV game. 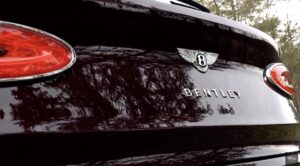 But here’s the Bentayga and it’s been on the market for 5 years already.  Have you ever seen one in the wild?  With a starting MSRP of nearly $180,000, they are rare but Bentley has sold more than 20,000 of them during that span, accounting for 45% of their global sales.  And for the 2021 model year, it’s been given the once over inside and out. 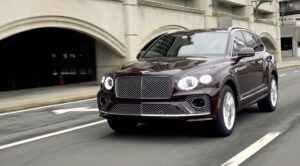 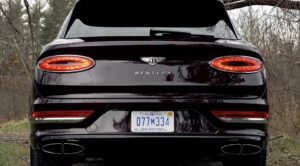 And then out back, there are redesigned lights and pipes along with a longer spoiler.  Bentley says every panel has been altered for a cleaner and more modern look and I would wholeheartedly agree.  The new Bentayga in this gorgeous claret paint is a subtle yet much improved upon design. 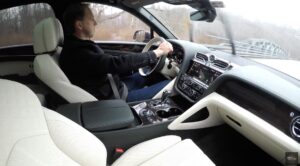 The previous old school VW infotainment system was the Bentayga’s biggest wart but that area has been fully addressed here, with this big touchscreen housing many new conveniences. 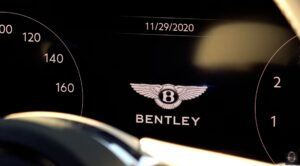 Because the meat of your thumb inadvertently presses the poorly placed park button when you go to shift, I’ve had to resist the urge to break the mechanism a number of times but then cooler heads prevailed. 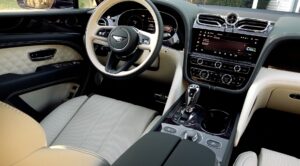 Otherwise there are new door trims and steering wheel, a new single sculpted vent near the Breitling clock, and most importantly new displays and human interfaces.  Think Audi and you’d be right on the money.  From the virtual cockpit with satellite mapping to parent company VW’s touchscreen, these updates were desperately needed to bring the Bentayga into the modern world and they work perfectly. 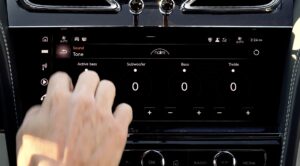 Fresh in its appearance with high resolution graphics this is what you’d expect from a high society car.  There’s wireless phone projection, 360 degree camera views and multiple massage programs.  It’s also the interface for this mind-blowing 20-speaker Naim sound system…a pleasure than can be yours for a mere $8,800; a nominal trinket among the near $60,000 in options this Bentayga possesses. 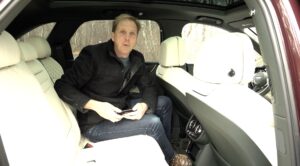 The Bentayga also offers 3 different seating configurations, this being the 5 seat model, which offers greater recline than before and a larger touchscreen remote control so you can open the overhead shade and check the driver’s speed.  It’s a great way to travel. 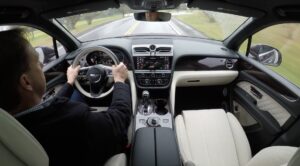 The new interface and Audi-like displays bring the Bentayga’s cabin into modern times so you no longer need to make excuses for your prized Bentley.  From a driving perspective, this 2021 model feels almost exactly as before: uber-confident, vault-like and expertly tuned. 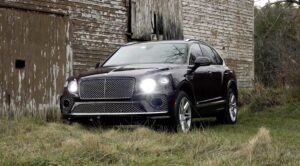 You may have noticed this Mulliner spec doesn’t have the standard 22’” Pirelli P Zeros, instead they’ve been swapped for some downsized all-seasons for winter which may ding the handling a little bit but this robust, impeccable, drive?  This is what elevates the Bentayga from other luxury wannabes. 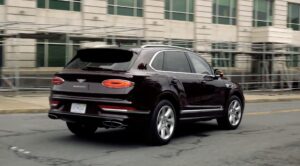 This 4.0-liter twin-turbo, 542 horsepower V8 not only moves these 2 ½ tons from 0-to-60mph in only 4.4 seconds but it sounds really good.  It’s a monster mated to an 8-speed auto that when set to Sport mode resonates a deep sports car exhaust note.  It’s just about the only thing from the outside world you’ll hear inside the cabin.  When combined with Dynamic Ride – Bentley’s active roll technology – the ride quality and level of handling is off the charts good for a luxury-minded  SUV.  An All-Terrain specification is also available for those who venture off-road, but not here.  And not that any Bentley shopper would care, but gas mileage is up a tick, to 18mpg in mixed driving. 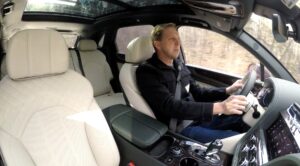 Are there any disappointments?  Well, at nearly $240,000 I would think you’d have the right to expect configurable ambient lighting, perhaps exterior logo projection or even a real rear seat entertainment system.  But if you want those things it’s going to cost even more. 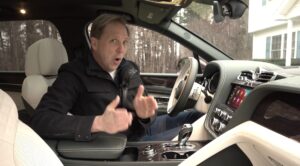 The Bentayga is a wonderful concoction of family, sport and style that sadly very few will ever get to experience.