Before SUVs dominated the automotive landscape, executive sedans like the 5 Series were the chariots of choice for white collar workers climbing the ladder of success.  And even though they’re not as popular as they once were, this new 540i serves as a reminder that the segment is still alive and well.

I first drove this 7th gen 5 Series 3 years ago – a 540i just like the one I have this week, except no xDrive, that was optioned to over $82,000.  It was reborn a baby 7 Series loaded with trickle down flagship tech and a remote control parking feature that beat Hyundai to market by 3 years…spoiler alert; that feature is gone. 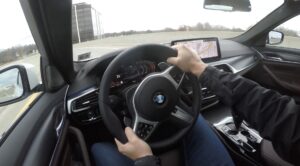 The luxury German automakers love to pack their midsize sedans with cutting edge technology and that holds true here with this updated 2021 5 Series. 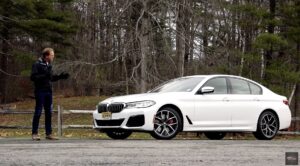 Beyond the breadth of electronic goodies, the other headline is the 540i’s new mild hybrid system.  Not only does it prop up fuel economy 13% but it also provides an instant 11hp of e-boost for more immediate acceleration.  Combined with launch control, this all-wheel drive 540i takes only 4.6 seconds to reach 60mph, with the inline turbo-6 producing the same 335 horsepower and 332 pound-feet of torque as before.  But even though it’s not any faster on paper, it feels more responsive with quicker bursts of speed as needed.  The additional 48 volt battery also serves up smoother and longer stop/start functionality.  The only downside, and it’s a small one, is that the regenerative brakes lose a little of their precise touch. 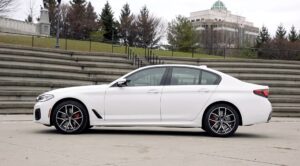 And of course, no update would be complete without a freshened exterior design, right? 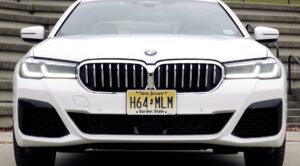 The adaptive LED headlights are slimmer and frame a new grille that is taller and wider but not full blown BMW crazy. The rear receives new taillights and these trapezoidal exhaust outlets are now standard across the 5 Series range. 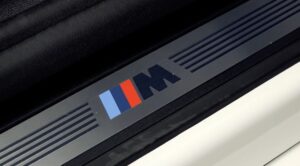 And the M Sport Package, priced at $3,300, takes on a more M-appropriate look with redesigned bumpers, larger air intakes, and a darker appearance.  These red brake calipers are a new option, as well and nicely offset the Alpine White paint. 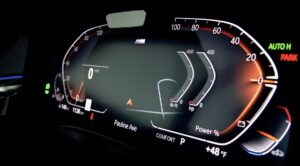 The 5 Series is a technological tour de force, as long as you go all in on the option packages.  And this one has some really great cutting edge features including some new stuff that even I haven’t seen before, most of it related to driving assistance. 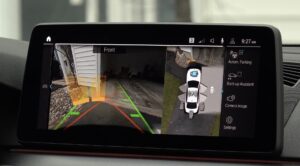 Like the graphical depiction of surrounding vehicles while driving on the highway to help with lane changes.  Speaking of which, this one can do that for you while using adaptive cruise control by simply tapping the turn signal…hands free.  And the extended traffic jam assistant can even do the mundane stop and go driving for you during your commute without constantly needing to grab the steering wheel. 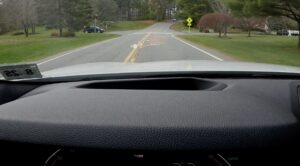 And I also love how the head-up display integrates your smartphone’s mapping directions so no matter which navigation system you’re using the 540i has got you covered. 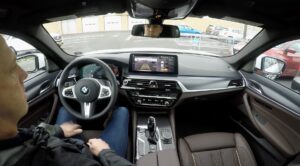 The Driving Assistance Plus Package, priced at $1,700, is what you need for most of these camera- and radar-based goodies which also includes Emergency Stop Assistant which can help guide your 5 Series to the shoulder and bring it to a stop in case of a medical emergency. 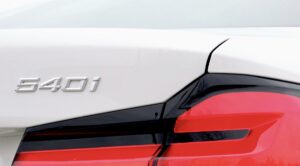 The Parking Assistant Package, priced at $800, provides the awesome camera views, automatic parking, a backup assistant that can memorize your long, curvy driveway and do the steering for you and a Drive Recorder which shoots footage from different points around your car so you can hand it off to the lawyers at a later time.  The head-up display is phenomenal, large, bright and packed with info, even relaying the presence of speed cameras. And the “hey BMW” natural voice recognition works very well to supplement the somewhat superfluous gesture control…you need the $1,800 Premium Package for this which also includes the power tailgate with kick sensor, wireless CarPlay and Android Auto and a killer Harman Kardon surround sound system.  The bigger touchscreen is beautiful and the navigation system shows 3D illustrations of important landmarks…it’s not quite Audi-level cool but it’s pretty legit.  And the navigation system talks with the 8-speed auto to get the gearing just right for your route. 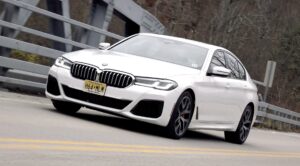 There’s a lot packed in here and it’s not always the easiest system to explore but if you’ve been driving newer BMWs for a while you’ll easily discover fun stuff like the all-encompassing mood settings, ambient lighting that makes for quite the conversation piece at night and performance gauges.  There’s plenty of legroom in the rear and the these seats have some sculpting but they sit a tad low so seeing over the top isn’t the easiest and could we get some heated seats to go with these USB-C ports, please?  At nearly $78,000 I’d say you’ve earned it. 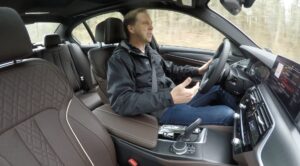 The soft, Nappa leather seats, the hushed cabin, the sumptuous suspension, the toasty warmth you get from the seats and steering wheel and the impressive sound system set the stage for stress-reducing motoring.  And when it’s time to move into Sport mode, the new hybridized inline 6 provides an impressive blend of performance and fuel economy, netting 26mpg in mixed driving. There’s nothing here in terms of racy sounds, but this car accelerates and handles gracefully and with assuredness. 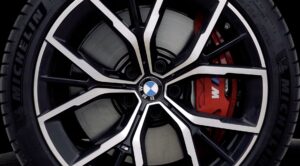 The $3,200 Dynamic Handling Package adds continuously adaptive dampers and roll stabilization to the lowered and tuned M Sport Suspension providing a very luxurious yet confident ride backed by the rear-biased xDrive system promoting sportier handling.  These staggered-width summer-use tires also contribute to that feeling but do produce some noise.  The various drive modes are exciting but I’d rather the system default to Adaptive and not Comfort upon startup.  All told, it’s wonderfully composed even when pushed too far but never overtly sporty in its persona. 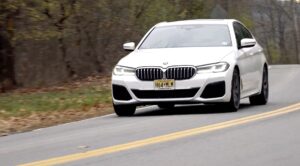 Available with 4-, 6- or 8-cylinder power including a plug-in hybrid and a full blown M model, the 5 Series range caters to your taste.  $77,935 for this 540i xDrive is lofty for sure but there is a lot of car here, capable of flagship status just in a smaller, more agile package.