As part of Toyota’s carefully curated Dinosaur collection which includes Land Cruiser, Tundra, Sequoia and this 4Runner body-on-frame ruggedness proudly lives on without too much interference from today’s world. 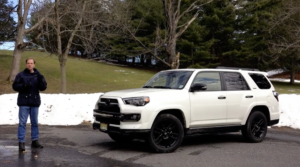 Ok.  So the Dinosaur Collection doesn’t actually exist but if Toyota wants to use the name they’re more than welcome. 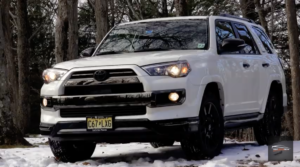 And look, can you really blame Toyota for their if it ain’t broke don’t fix it approach to the 4Runner…it’s actually been setting sales records this year.  And SUV people realize that they don’t really build ‘em like this anymore  so there’s definitely an undeniable appeal within the 4-wheel drive community. 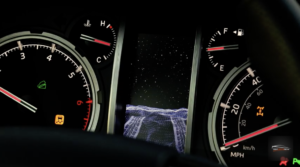 For those of you who don’t quite get it it’s kind of like holding on to Windows 7 even though the world has migrated to Windows 10. 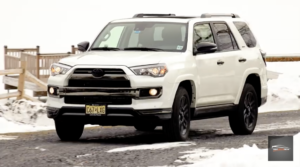 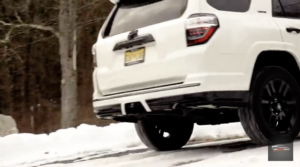 Toyota introduced this fifth-generation 4Runner a decade ago.  Gone are the days of stickshifts and manual locking hubs, but the trio of 4Runner TRD models comes standard with a locking rear differential, multi-terrain select and crawl control – stuff you want when off-roading.  But this Limited grade is after a slightly different customer. 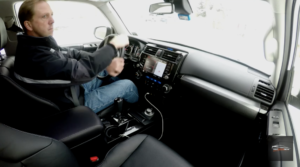 With the transition to unibody, all-wheel drive SUVs vehicles like the 4Runner have mostly gone by the wayside. So it’s nice to see that it’s still going strong for those who want to go farther. It is no doubt off-road worthy. But this is the range-topping Limited model and as such it’s not the 4Runner you’d choose if mud is first and foremost on your mind. 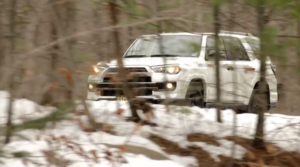 It doesn’t possess the full arsenal of 4Runner off road gear. So you must view this one through the prism of a quasi-luxury SUV and at that it’s far less impressive. It’s the Limited so you might expect LED lighting, blind zone detection, cruise control with stop and go, a power lift gate, a height adjustable passenger seat, a 3 blink directional signal, heated steering wheel and a wireless charge pad. But Toyota says nope. We’ve given you all you need.

Oh, no. Not this snowflake again; the guy who bashed the Toyota because he didn’t have a place to put his foot on the bumper when the tailgate was down. And now he’s saying that the 4Runner ain’t new enough!? Who the hell even knows what LDE lights is. All I know is I don’t need em. And the 5-speed is the perfect tranny. The more gears. The more problems. What he don’t get is that this thing is gonna last like 40 years. So take my 50 grand and keep your mouth shut. He probably wants a Ridgeline. 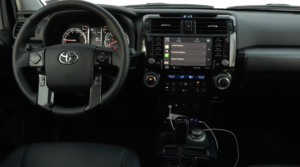 Well that wasn’t very nice.  But look – I get it.  Toyota has added Apple CarPlay, Android Auto and Amazon Alexa, a new instrument panel design and 8” touchscreen for 2020.  They’ve also made Safety Sense P, which doesn’t include blind spot detection, standard on all 4Runner models.  There are also 2 USB ports now in the 2nd row. 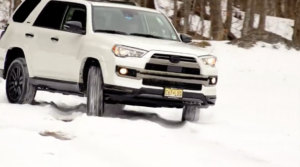 Speaking of which, this 4Runner is equipped with the optional 3rd row for seating up to 7 though entering and exiting that area is nearly impossible.  The automatic running boards which were introduced in 2012 are too narrow and actually make getting in and out more difficult.   But the rear window goes down so that can be useful, the 2nd row seats slide and recline, there are heated front seats and an easy to use infotainment system with a nice sounding 6-speaker JBL audio system with subwoofer. The auto high beams are the worst I’ve ever tested.  The 270 horsepower V6 and 5-speed auto return a disappointing 16mpg in around the town driving but the full-time 4-wheel drive system on this Limited with its Torsen locking center differential can push as much as 53% of the available torque to the front wheels and reacts before wheelspin occurs.  Nearly 10” of ground clearance, solid approach and departure angles, and 5,000 pounds towing should allow you to get where you need to go.  Oh, and about this Nightshade edition – it debuted on the 4Runner last year and adds lots of black stuff as an accent to this upcharge Blizzard Pearl paint. 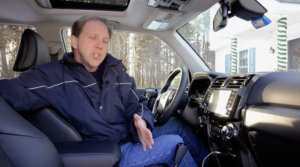 It’s exactly weather like this where the 4Runner earns its keep AND you know I’m an advocate of 4-wheel drive systems with an auto setting and this Limited has it so as road conditions change you don’t have to worry about shifting in and out of 4-high. The engine is a little gruff but the 4Runner still drives with an assured smoothness. 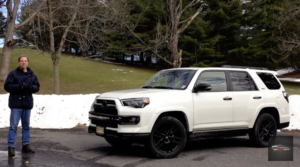 The Limited receives special shocks that automatically adjust to bumpy surfaces, focused more on everyday comfort and on-road handling.  With options, this Japanese-built 4Runner Limited Nightshade Edition stickers for $52,070.  Scuttlebutt says a redesign onto Toyota’s new shared truck platform in due in 2023.