When I think back to the thousands of car I’ve tested over the past 23 years, there’s a shortlist of those that have left an indelible impression; the ones I’ve placed in my fantasy garage and the NSX is one of them. 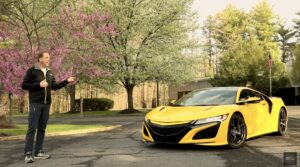 From slobbering all over it in car magazines back in college to my first professional drive in the late 90s, I was hooked.  And then with this 2nd gen car went on sale 5 years ago, I had one for 3 hours, very near to but not actually on a racetrack to experience this 21st century reinvention.  I was blown away then and I’m still in awe now. 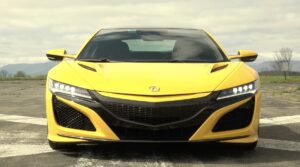 In a pearl yellow so bright it makes the sun jealous, this NSX is an attention magnet that creates curiosity.  Now in its 5th model year of the2nd generation, it’s understandable that most people don’t have a clue as to what they’ve just seen.  With as few as 3 of these cars rolling out of Acura’s Performance Manufacturing Center in Ohio each month, an NSX sighting makes spotting a Lamborghini Huracan downright commonplace by comparison. 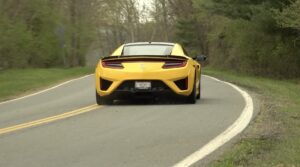 It’s an all-wheel drive hybrid 2-seater with 3 electric motors assisting a twin-turbo V6 that sits longitudinally behind the driver with the lithium-ion batteries and twin gas tanks slotted in between.  Thus, 58% of the weight is in the rear but that doesn’t mean the NSX is unbalanced.  With the twin motor unit providing torque vectoring to the front wheels, the NSX can corner harder that a McLaren 570S. 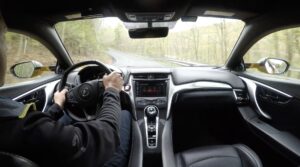 It’ll blow the doors off of an Audi R8 V10 off the line and stop shorter from 70mph than a Porsche 911 Turbo.  And let’s not forget: this is manufactured with Honda reliability and what supercar owner wouldn’t pine for that kind of peace of mind? 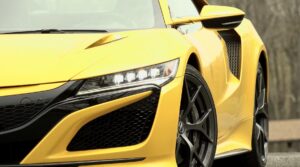 As is typical for Albany, the weather has been miserable during my test week complete with rain, cold and even some snow flurries.  But with a set of Acura-recommended Pirelli Winter Sottozero 3s – which will set you back $2,000 by the way – I’m ready to drive.  Because the NSX sits so low to the ground, getting in and out gets tedious – but once belted in the full leather seats feel remarkably comfortable without the benefit of any trick side bolsters or even height adjustment. 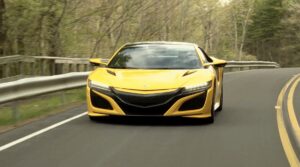 Fire it up and there’s a quick whoosh of engine sound in the default Sport mode but take a moment to gather yourself before selecting reverse and the NSX is likely to transition to pure electric with nothing more than the ethereal low-speed EV ambiance as you back out of the driveway.  There’s a Quiet mode just below Sport, and you can program the NSX to default to this more neighbor friendly setting if you desire. 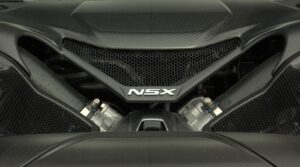 Though in the supercar realm, the NSX is Lexus quiet by comparison.  Most of the sound generated is manipulated and enhanced for those in the cabin anyhow, and that visceral component gets louder with each turn of the dial.  And if that’s something that’s super important to you, the NSX simply can’t match the auditory excitement of its V8 and V10 competitors. 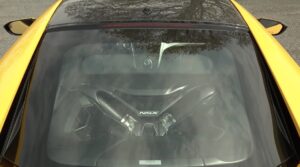 This is no doubt a supercar but it’s arguably the most practical supercar you can buy.  The windshield is huge and despite no height adjustability for the seat you don’t feel like you’re sitting in a tub so visibility is excellent.  It’s not loud, the ride isn’t punishing and it’s set up to be confidence inspiring and easy to drive fast. 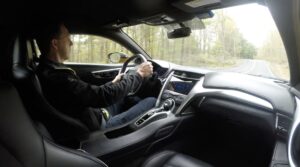 And because it’s a hybrid you’ll get brief moments of quiet EV motoring and 21 mpg.  And in Sport+ and higher, the acceleration is otherworldly.  Using launch control is mind blowing.  From memory, the biggest difference between my last NSX test and this one is that the previous car was fitted with Pirelli Trofeo Rs and this car is wearing winter tires so that glued to the earth sensation isn’t quite as strong but man, can this car handle. 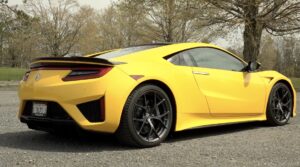 The 2019 model year brought about changes to the NSX further enhancing the chassis through stiffer stabilizer bars and other critical suspension hardware that holds the rear wheels in place.  An upgraded tire was also part of the upgrade.  And then the software controlling the Super-Handling All-Wheel Drive System, steering, and coilover shocks has been enhanced to elevate performance, which according to Acura, benefits both street and track driving. 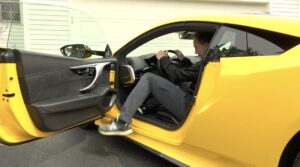 And it’s important to note that the NSX is a car that doesn’t drive like it needs a racetrack to be happy.  It’s incredibly fun to drive on your favorite rural roads, the more twisty the better.  Max torque of 476 pound-feet aided by the electric motors produces acceleration that’s so quick it’ll have you seeing tunnel vision.  Total system horsepower is 573 and the 9-speed dual clutch transmission shifts smoothly though isn’t as quick to change gears in manual mode as I would’ve imagined…at least not in Sport + and below.  The only time I’ve used Track mode is up here. 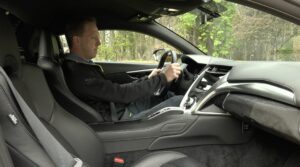 0-to-60mph in 2.9 seconds with a top speed of 191 is enthralling and this powertrain just keeps pulling.  And the way Acura has programmed the traction and stability control systems to scrub out unwanted wheel spin and keep the NSX pointed straight is very impressive.  The ride only starts to encroach on brittleness in Track mode and this tarmac is far from perfect, but if you choose to drive the NSX every day, even cruising on the highway, you could; no problem. 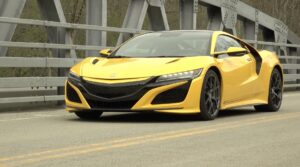 But the one thing you’ll likely want to leave off is the carbon ceramic brakes; wonderful on a race car, unpredictable and squeaky on the street.  And they cost nearly $11,000. Though once they’re warm they stop this 3,800 pound car resolutely. 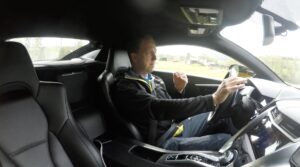 I commented back in the fall of 2016 that the interior already felt stale and father time isn’t forgiving in this modern electronics age so this remains the NSX’s biggest disappointment.  And this isn’t an Acura problem – you see it all the time with high-end and exotic sports cars – you pay big bucks for the look and the drive and other bits are left in the dark ages. 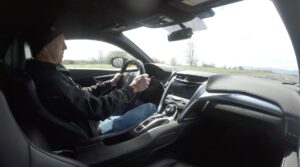 The Technology Package with the ELS Studio Audio system, sat radio and navigation is decrepitly old.  There’s a lack of little storage spaces, the area for modern smartphones is too small, the cupholders literally plug-in, there’s no head-up display, no side blind zone alert, no fancy performance gauges, etc.  So do all of the bragging before your passenger gets in.  Under the hatch, there’s 4 cubic feet of space with a small hump in the middle for the transmission, so not terribly usable. 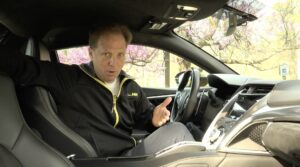 Loaded with all of the options including the extensive use of carbon fiber both inside and out, this car totals $191,995.    Expensive for sure, but relatively speaking it’s a performance bargain with the exception of another American made mid-engine car called Corvette that’ll save you at least $100 grand.  But the NSX is more of everything minus the cabin and it’s too bad you can’t get the Acura as a convertible…something all of its competitors offer.  For me, this is a dream car with some warts I can overlook.  Perhaps those areas will be addressed with the NSX’s anticipated freshening next year.