When Hyundai redesigned the Sonata for the 2015 model year it decided to rein in the styling. 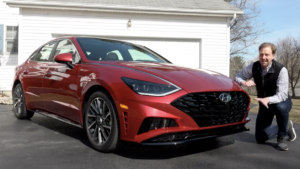 And, as it turns out, that wasn’t the best move as the very element that catapulted this car to huge sales success was no longer present. 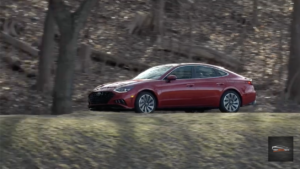 But learning from that experience this all-new 2020 Sonata is letting it all hang out. 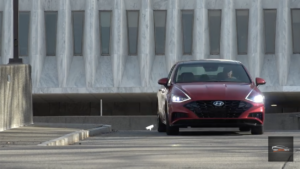 The midsize sedan used to be the measuring stick by which mainstream brands were judged; Camry, Accord, Altima, etc.  But with sales trending heavily towards SUVs some manufacturers have actually vacated the space. 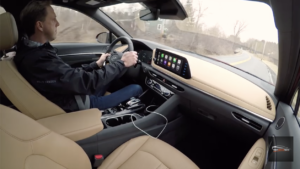 Not so at Hyundai, however, where the Sonata is still considered their signature product.  So for this next generation they’ve gone back to the drawing board, and much like the rest of the segment, have fully embraced sensuous styling and whizzbang features. 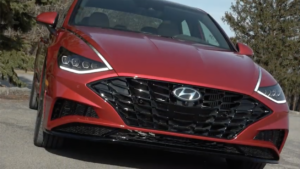 This Calypso Red Limited retails for $34,610 with the only option being carpeted floor mats.  It’s the Sonata’s top trim and faithful to Hyundai’s ethos is jam-packed with goodies that scream that this is a heck of a bargain. 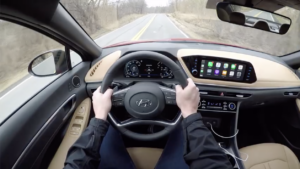 Now, for what it’s worth, I’ve derided the Sonata’s front fascia since my first glimpse of it during its auto show debut.  It suffers from the same catfish droopiness of the Chevy Malibu…the base SE trim actually has a perkier face. 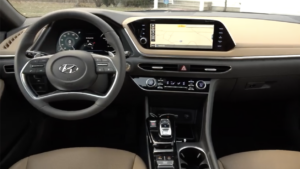 Nevertheless, the Sonata is designed to produce stares and that it does. 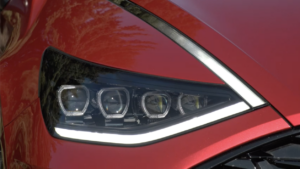 Cool touches such as the adorned center wheel caps and the chrome hood strips that illuminate when the car is turned on are powerful statements. 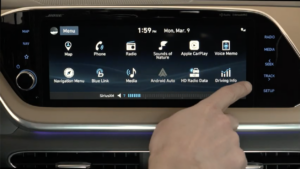 Hyundai’s powertrain strategy thus far is a bit curious.  The lower 2 trims now use a more efficient 2.5-liter 4-cylinder producing slightly more power than before while the top 2 trims utilize the engine that used to reside in the Sonata Eco; a 1.6-liter turbo, though it’s no longer more economical than the base engine, garnering 31mpg in mixed driving thus the Eco moniker is no longer.  Output from both motors is relatively similar with the 2.5 making more horsepower and this turbo more grunt.  As of now, there’s no direct replacement for the former 2.0T model which made a healthy 260 pound-feet of torque.  This one here is rated at 180 horsepower and 195 pound-feet. 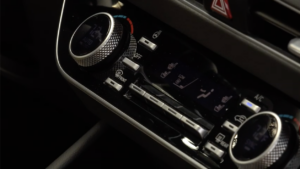 From the moment you lay your eyes on it until the time that you sit inside the Sonata presents itself as very premium; almost Lexus-like in its aura.  So your mind is immediately being programmed for luxury.  And though this engine works quite well in a number of their other applications here it just seems a bit out of step with the overall vibe; perhaps a little too juvenile when the car’s constantly setting you up for more grace. 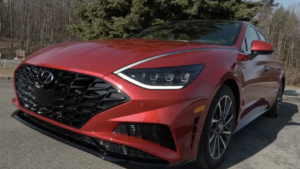 The Sonata keeps reminding me of a Lexus ES without the polished ride.  Save the firm dampers for the upcoming Sonata N Line, this one should showcase a smoother side.  Otherwise, I enjoy the newfound nimbleness and more connected steering and the 8-speed auto with paddle shifters is a good mate.  Smart, Normal and Sport driving modes are accessed by a flick of the switch and provide some corresponding visual pop on the driver’s display.  It’s interesting to note that the Sonata’s turbo does not use stop/start engine technology.  It feels appropriately quick but at times a bit too boisterous. 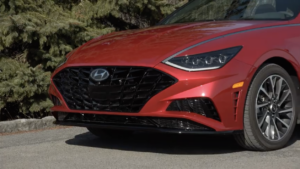 The Sonata now has more sports sedan in its genes so it rides a bit firmer and definitely makes some racier engine sounds but it’s still a delight to drive; though I think a bigger motor would make it feel just a little more mature. I also wish there was more cushioning in these front seats.  But at this price point, the Sonata is already an overachiever. 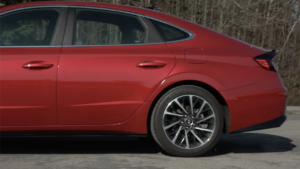 I also wish this driver’s seat could go a little lower and that the passenger seat had any height adjustment at all, but by in large this is what’s going to hook shoppers.  The cabin is stellar both from a visual as well as an ergonomics perspective. 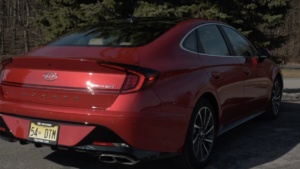 It’s rich and inviting with high quality touchpoints, leading electronics and wicked cool features: a panoramic sunroof, Camel leather interior, crisp heads-up display, around view camera, new blind view monitor that uses video feeds to display what’s on the side of the car, smart cruise control that can also handle the steering duties for longer periods of time than most systems, climate comfort steering wheel and front seats, wireless charging and the Smart Trunk Release that doesn’t require a kick of the foot to operate. 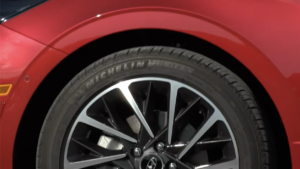 Though Hyundai seems to be getting all of the credit for this feature they call Smart Park in reality BMW has been offering it for a number of years. But it is nice to see it move down to a car at this price point. Now, I’m not really sure how much the average owner would actually use it but the wow factor is still pretty high. 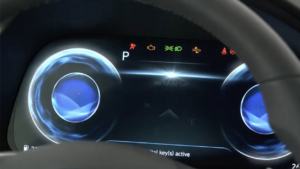 The other stand-out feature is Digital Key which allows you to use your phone as a key…also shareable with others.  But, it only works with Android devices so I didn’t get to check it out.  And much like Mercedes and BMW, Hyundai has introduced soothing nature sounds to the infotainment system.  I’m a sucker for little touches like this and they play brilliantly through the new Bose Premium Audio system that automatically adjusts Audio and EQ depending on the vehicle’s speed. 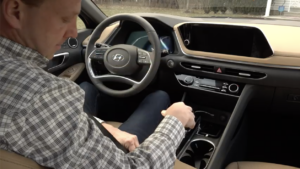 The Sonata masquerades as a quasi-sport sedan so it’s nice to see some sculpting to these rear seats for times when the driver decides to get a little frisky so they will hold you in place. But in a car that has gone hog-wild with features it’s surprising not to see heated rear seats. 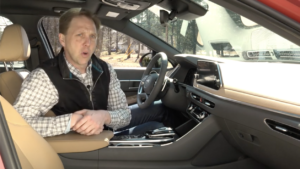 Size wise, the trunk is still large car proportioned as is rear seat legroom so a family sedan it most certainly is; one that makes its presence known and lavishes its occupants for pennies on the dollar.