Volvo’s trifecta of new flagship 90 Series models include an SUV, a sedan and 2 wagon variants, representing the best the brand has to offer. After spending a week with this V90 Cross Country, I’ve now driven all 3 and in fact it’s the wagon that best epitomizes Volvo’s ethos, making it the standout model in the range.

Volvo is practically synonymous with two things: safety and station wagons. But striking design?  Cutting edge semi-autonomous driving technology?  Those are relatively new frontiers for the Swedish automaker which has become increasingly progressive.  From their unique super and turbocharged engines to the recently unveiled plan to electrify all of their models starting in 2019, Volvo embodies an independent spirit that’s refreshing.

So when this V90 Cross Country arrived, we just had to hit the road, taking a beach getaway to New England. Wagons and road trips go hand-in-hand and right from the get-go I was impressed.  I’m not a lover of brown paint but this Maple Brown Metallic just fits this Volvo so appropriately.  It’s a long car but perfectly proportioned with a gorgeous front end featuring Thor’s Hammer LED running lights.  It’s lifted nearly 8” above the ground atop hearty 20” Pirelli Scorpions for capable light off-roading.  I fell hard for the look as did numerous others based upon the number of stares it garnered.  It’s elegant and sophisticated yet beefy and utilitarian.  You can get a standard V90 without the quasi-SUV treatment at a less expensive starting price but I’m not sure I could pull myself away from the added Cross Country ruggedness.  With all-wheel drive, increased ride height and a chassis engineered for ultimate comfort, this V90 has exploring in its DNA and it’s a palpable feeling from behind the wheel.  Several drive modes, including a slow-going off-road setting, allow for a custom feel by modifying the characteristics of the 8-speed automatic, 2.0-liter engine, all-wheel drive, steering, brakes, suspension and more.  Eco is perfect for crawling along the shore and Dynamic gets things racy for when the backroad opens up.  Averaging over 26mpg and producing 316 horsepower on premium gas, this is the little engine that could but I can’t help but think how much smoother and refined the drive would be with a naturally aspirated V6…and that goes for all of the 90 Series vehicles.  As quick as it is, and it can turn out a 0-to-60mph time in a mere 6 seconds, it’s just not quite mature enough for this ilk, making it a little tricky to drive smoothly.  But a lot of that is forgiven when you’re in here.

So quiet and comfortable in this Scandinavian-chic cabin, the V90 has proven to be the perfect family travel vehicle capable of gobbling up 5 occupants and a week’s worth of gear with ease and in style. With its head-turning handsome looks and stress relieving amenities, this is modern driving made easy.  Standout features include the likable adaptive cruise control, easy to read head-up display, the go-for-it 360 degree camera, massaging front seats and a Bowers and Wilkins sound system you’ve got to hear to believe.  I’ve always been a big fan of the E Class Wagon but the V90 has won me over.

I don’t just like it, I love it. It’s all the little things like the clever cargo area that can be accessed with a kick of the foot, benefits from an automatically retractable cover and includes remote buttons for dropping the rear seats and a pop-up grocery bag organizer.  Plus, the air suspension self-levels as you load and unload.  It truly is a smart space that eats up large amounts of stuff while still giving those in the rear seats more than ample room all around.  Plus, there are 2 more zones for climate control, heated seats, window shades and a huge panoramic roof overhead.  I had no complaints from either my younger or adult rear seat passengers.  Plus, everyone enjoyed the Wi-Fi hotspot and the serenity that is the V90’s hallmark feature.  The ride quality is impeccably good; forgiving but agile. 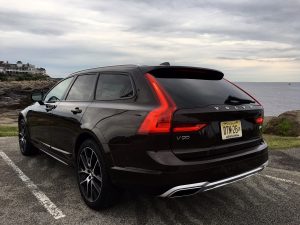 A week away with the V90 was the perfect time to get into the nitty gritty of this Sensus system which previously frustrated me. Over time I’ve become accustom to its nearly button-less, touch and swipe interface even appreciating its depth of features and of course, its cool appearance but some latency issues at startup and a dud navigation system keep me from fully embracing it.

I finally got to use the Volvo On-Call app and it’s a great addition, allowing owners to check-in on their car, control certain functions and even send directions to their car – by far the preferred navigation method here. But this isn’t OnStar…I pressed the OnCall overhead button once for directions and was told that’s not a service they provide.  CarPlay and Android Auto are onboard and personalized driver settings are available to setup the entire car just for you.  I did inadvertently drop these guillotines on my daughter more than once by swiping and hitting the headrest buttons…that might be one icon Volvo wants to move.  There are self-parking features but for me it’s the surround view camera that’s most invaluable to positioning the V90 precisely where I want it.  I love that feature.  Auto highbeams, auto folding mirrors, and basically auto driving give the V90 a concierge-level treatment.  While the adaptive cruise control follows a set speed and distance from the car ahead, Pilot Assist literally takes over the steering.  Doing hundreds of miles of highway driving I found activating Pilot Assist worked best when my hands weren’t on the wheel…not really the way it’s meant to be used at this point.  You have to touch the wheel every several seconds to keep it on.  When I kept my hands on the wheel, Pilot Assist fought me more than it helped so I usually just kept it off.  But I can see the rungs of the autonomous driving ladder being climbed and that’s promising.