Posted on December 16, 2017 by TestDriveNow.com

With its innovative and elegant two-motor hybrid powertrain, the 2014-2015 Accord Hybrid set the benchmark for a mid-size hybrid sedan in refinement, advanced technology and class-leading fuel efficiency.  The 2017 Accord Hybrid moves even further ahead of its competitors with the application of a second-generation two-motor hybrid system, providing even greater fuel efficiency and class leading total system horsepower while benefitting from the styling and technological enhancements made to the Accord lineup for model year 2016. 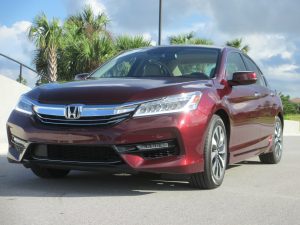 From an Accord family perspective, the new Honda Accord Hybrid is the ultimate Accord, the most refined, technologically sophisticated and, of course, most fuel efficient model in the lineup. 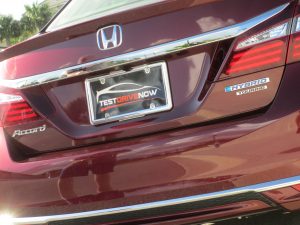 Celebrating its 40th anniversary this year, the Accord has set the benchmark for vehicles in the midsize sedan class. Accord is widely recognized as a segment-defining product, delivering class-leading interior space and superior ergonomics along with outstanding fuel efficiency, refined and responsive driving dynamics and top-class safety performance. This is what has made the Accord America’s most popular car for five of the past six years and for the last three years running, and the best-selling midsize car to buyers under 35 years old for the past four years. 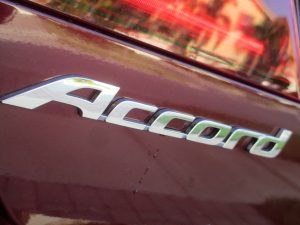 The 2016 Accord received multiple enhancements that further advanced the 9th-generation Accord by making it more stylish, sophisticated and sportier and with enhanced safety features and other technological advancements. For the 2017 model year, the Accord Hybrid benefits from all these improvements that also include new premium features such as the combined application of Apple CarPlay™ and Android Auto™, the expanded use of LED exterior lighting and the application of the Honda Sensing™ suite of safety and driver assistive technologies, offered as standard equipment on the 2017 Accord Hybrid. 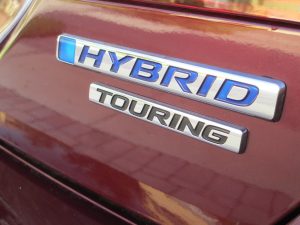 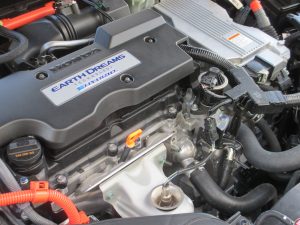 Combining the next generation of Honda’s two-motor hybrid system with an ultra-efficient 2.0-liter i-VTEC Atkinson Cycle engine, the 2017 Accord Hybrid powertrain will achieve peak combined output of 212 horsepower, the highest of any midsize hybrid sedan and up 16 horsepower over the 2015 Accord Hybrid. EPA fuel economy ratings of 49/47/48 (city/highway/combined) put the Accord Hybrid at the top of the class for ratings, making it the most powerful and fuel efficient midsize hybrid sedan in America. These EPA fuel economy ratings are based on new, more stringent ratings requirements enacted by the U.S. EPA for the 2017 model year. 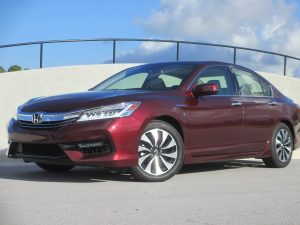 The Accord Hybrid gets a major facelift for 2017 that closely follows the changes made to the gasoline-only powered 2016 Accord models. 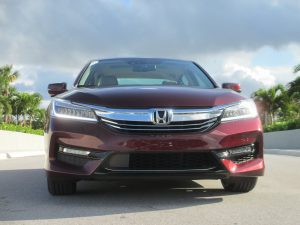 In place of the previous wrap-around front bumper is a more sharply creased and intricately structured front fascia, the lower portion of which tucks into large intake-like meshed areas that house new standard LED fog lights. An Accord Hybrid exclusive, elegantly contoured aluminum hood meets up with a brighter, more pronounced front grille. 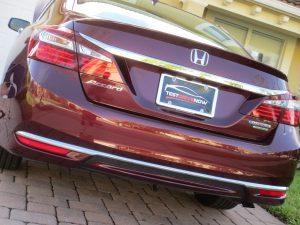 The new more expressive face of Accord is complimented by a sharply sculpted rear bumper fascia and new LED taillight design. Blue-accents on the front grill, headlights and taillights of the 2017 Accord Hybrid, along with special “Hybrid” badging, provide a subtly distinctive look and visual differentiation between from its gasoline-only powered stable mates. 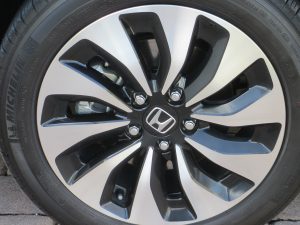 All Accord Hybrid trims have unique 17-inch aluminum alloy wheels and feature the expanded use of LED lighting – LED daytime running lights (DRLs), taillights and fog lights for all trims, and LED headlights for the Touring trim. 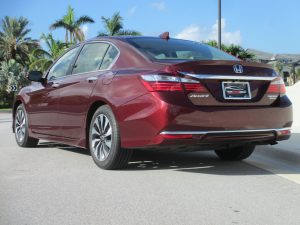 The Accord Hybrid also gets a revised exterior color palette with five new colors – out of the eight available – as well as new interior tricot seat fabric (base trim) and color schemes including a sophisticated new wood grain-style dashboard trim.

The 2017 Accord Hybrid’s sportier design is matched by its improved dynamic performance. New higher performance Amplitude Reactive dampers and a retuned electric power steering system combine to deliver an even more linear and compliant ride and precise handling response. 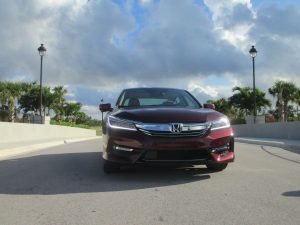 All 2017 Accord Hybrids come standard with Honda Sensing™, among the most comprehensive suite of advanced safety and driver-assistive technologies in the competitive class. The following technologies comprise Honda Sensing: 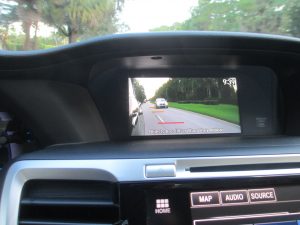 All 2017 Accord Hybrids also feature a standard Multi-Angle Rearview Camera. 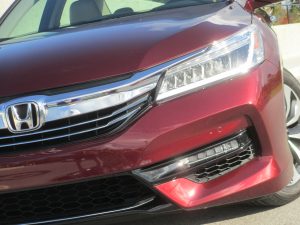 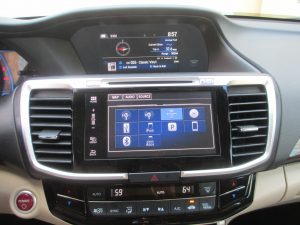 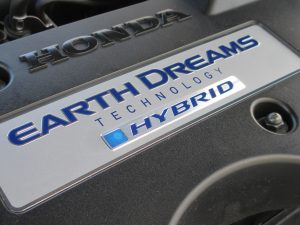 Total combined horsepower is up 16 hp to 212 horsepower and EPA fuel economy ratings were raised to 49/47/48 (city/highway/combined). These EPA fuel economy ratings are based on the new more stringent ratings requirements enacted by the U.S. EPA for the 2017 model year and cannot be directly compared to the figures for earlier model Accords or competing vehicles. Nevertheless, when compared using the same criteria, the 2017 Accord Hybrid bests the 2014/2015 model in all ratings.

In keeping with Honda’s commitment to safety, the 2017 Accord Hybrid is the first Honda vehicle to have as standard equipment the Honda Sensing™ suite of advanced safety and driver-assistive technologies. Honda Sensing™ is designed to expand the driver’s situational awareness while sensing and responding to potential road hazards, including other vehicles, road obstacles and even pedestrians, even to the point of mitigating the possibility or severity of a collision. 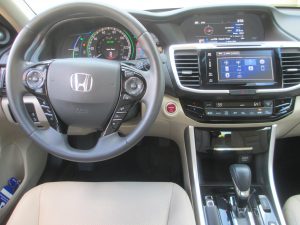 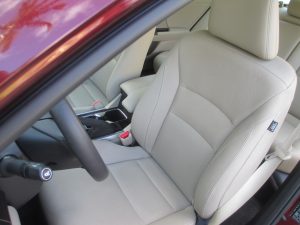 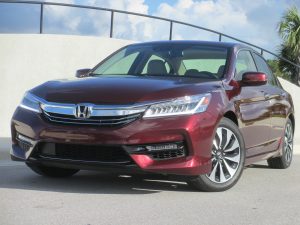 AS SHOWN ALL STANDARD EQUIPMENT AT NO EXTRA CHARGE plus destination and delivery $36,790