Most of you check out my reviews because you’re legitimately interested in researching a new car and for that I thank you. But considering the average Rolls-Royce buyer owns more than 20 other vehicles and possesses a net worth of more than $20 million, well I’m going to assume you’re watching this video for its infotainment value.  For me, I’ve got 4 days to act like a big shot in this new Dawn with the top down and the Spirit of Ecstasy leading the way. 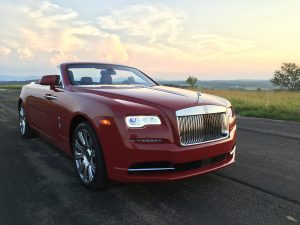 Even greater than the more plebeian Bentley brand, Rolls-Royce is the automotive apex of highly-personalized, hand-built, super-luxury products. Whether you choose the entry-level Ghost sedan, Wraith coupe, Dawn convertible or range-topping Phantom, nothing less than $300,000 will get the deal done.  Rolls-Royce cars are constructed by a group of 60 highly-trained specialists at their factory in Goodwood, England.  Thirty percent of owners fly there to design their own cars where more than 20 are produced every day, 90% of them going for export.

The Dawn is the newest Rolls-Royce, having debuted for the 2016 model year. Its designers gleaned inspiration from the Silver Dawn model of the early 1950s.  In British speak it’s called a drophead body; what we call a convertible.  And what makes it truly unique is that it’s an honest-to-goodness 4-seater – these spots are sized for adults and be accessed gracefully.  It’s longer and despite its aluminum hood heavier than a Chevy Tahoe but never fear, every Rolls-Royce is 6.6-liter’s  of V-12 power and this one benefits further from twin turbos producing 563 horsepower and 575 pound-feet of torque.  Silent but stirring, the Dawn majestically dispenses of 60mph in less than 5 seconds.  The Power Reserve meter tells you how much more is left on the way to a governed top speed of 155mph, but it feels as though there’s an endless supply.  The coach doors provide a unique entry point and can be remote controlled via dash switches so as not to tax its occupants.  They soft close, as well. With supple lambswool footmats and a bespoke interior crafted from the finest materials the Dawn, in the company’s own words, is a place of opulence, security and presence.

Few will get to experience what it’s like to drive a modern Rolls-Royce. My first time came just a couple of years ago in the Ghost. First off, you are commanding a wide, long, heavy car with a sizable steering wheel and a lot of hood out ahead of you. It feels absolutely invincible as if it was constructed from a solid piece of rock with physics defying acceleration. It moves as smoothly and as effortlessly as any car I’ve ever driven. And the road beneath simply melts away as the Dawn floats on its cushion of air.

Air springs and huge 21” staggered width premium ultra-high performance summer tires provide the magic carpet ride treatment while doing a commendable job of handling the Dawn’s prodigious proportions. Combined with the navigation-linked 8-speed automatic transmission which reads the road ahead to orchestrate gear shifts, the Dawn’s movements are as fluid as can be. It’s no sports car on the twisty roads but it doesn’t embarrass itself either. Never sloppy, the rear-wheel driven Dawn is an outstanding drive unlike anything else – top up, or down. Gas mileage has dropped 1mpg from last year’s model, now rated at 14miles per gallon.

Having been part of the BMW family since 1998, the electronics unfortunately speak German and not the latest dialect either. This is the previous generation i-Drive setup and therefore it’s overly complicated and doesn’t possess a touchscreen or full smartphone integration. However, there is a heads-up display, smart cruise control and a 16 speaker Bespoke Audio system crafted specifically for the Dawn –a true masterpiece.

With a palette of 44,000 exterior and interior colors, Rolls-Royce cars are all about Bespoke. If you can dream it, they can build it.  The base price of a Dawn is $346,475 including destination and a gas guzzler tax while this one retails for nearly $400,000.  The Parthenon Grille.  The Double R logo.  And the Spirit of Ecstasy.  May you be lucky enough to be one of the 4,000 who’ll own a new Rolls-Royce this year?