The all-new 2019 Forte sedan enters its third generation with a more sophisticated design and desirable features, transforming one of Kia Motors America’s (KMA) best-selling vehicles into something more than just a commuter car. Thanks to a number of improvements, Forte now offers drivers a higher level of comfort and Kia Drive Wise technologies that are aimed to make the journey – whether a short commute or long haul – a more rewarding and decidedly upscale experience. Sporting an overall bolder appearance, the newly designed compact sedan also boasts improved EPA-estimated combined MPG ratings.
Standard features and desirable amenities in the Forte continue to be available across four trims – FE, LXS, S and EX – with the model line continuing to expand throughout its lifecycle. Available later this fall, a limited Forte Launch Edition commemorates the all-new model with unique visual enhancements and standard technology upgrades.

As one of Kia’s best-selling models the Forte compact sedan and hatchback play a key role for the Korean brand. It’s situated in the highly competitive segment that includes the Honda Civic and Toyota Corolla, but that’s OK because this all-new 2019 model has evolved into a much more sophisticated car delivering a decidedly upscale experience.

This is one of the most impressive new cars I’ve driven in some time. It’s tastefully styled, brimming with features and a joy to drive.  Just about everything about it belies its low sticker price.  It plays with the compacts but it’s actually a midsize and its new powertrain delivers vastly improved efficiency.  Engine output is the same as before, but with an over 20% increase in mpgs and a larger gas tank, the Forte’s driving range has added over 100 miles, to 476 in total.  Rated at 30mpg city/40mpg highway, the Forte is neck-and-neck with the all-new Corolla as the segment’s mileage leader.

But this isn’t a story about a car that’s put fuel efficiency above all else. This range-topping EX trim, priced from just under $23,000, is a car you’ll be proud to own and enjoy driving.

TDN NEWS: MAZDA MX-5 MIATA RF LAUNCH EDITION LIMITED TO 1,000 VEHICLES Revolutionary and breathtaking to look at, yet simple and elegant in concept, the 2017 Mazda MX-5 Miata RF made its debut at this year’s New York International Auto Show with… 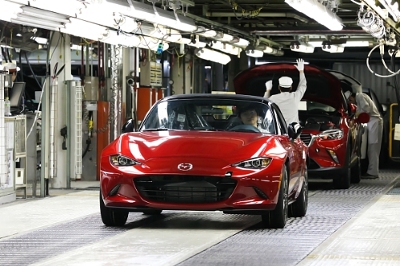 2016 MAZDA MX-5 ARRIVES THIS SUMMER The wait is almost over, as North America-bound 2016 Mazda MX-5 Miata production began today, signaling the imminent arrival of the next generation of the world’s most popular two-seat roadster at U.S. dealers. Additionally,…

Posted on February 16, 2015 by TestDriveNow.com