Like the rest of America, you’re in the market for a new crossover – one with 3 rows of seats. You’ve done pretty well in your career so a luxury model is preferred. Though its name has changed Infiniti’s entry has been around for 5 years now and is a compelling choice in the segment. This is the 2018 QX60.

Back in 2012, the family and I went on a summer vacation in the then all-new 2013 Infiniti JX and I’ve been thinking about that review quite a bit this week. All told, I was onboard with the brand’s stylish new ‘ute and it’s nice to see that areas of concern have since been addressed.  The 2016 model year introduced a host of enhancements targeting ride quality among other things and I’ll tell you what; Infiniti has kept it remarkably competitive.  Despite the breakneck speed at which the industry is changing, the QX is still a breath of fresh air.

Back then, I asked for more power and a smoother ride and Infiniti answered. Nowadays, this model’s 3.5-liter V6 is rated at 295 horsepower, up considerably from when the JX was introduced, and it benefits greatly from new shocks and springs that result in a smoother ride and less body roll.  Now, with 270 pound-feet of torque it’s sneaky quick and the suspension plays the sophisticated luxury roll far better than before.  On top of that, gas mileage has improved, with this all-wheel drive model rated at 19mpg city/26mpg highway on recommended premium.  And from the driver’s seat, the QX feels alive.  Active Trace Control is a brake-based dynamic system that enhances stability when cornering and the drive mode selector tweaks the drivetrain for the dialed in setting.  Compared to the similarly priced Buick Enclave Avenir I just tested, this QX60 feels more the part of an agile athlete.  This one here is going to better satisfy the driver.

I’m more impressed with the QX now than I was in my first 2 test drives – both occurring before the major 2016 refresh. The styling still looks contemporary, the cabin feels very high end, and the drive is sporty and luxurious. It’s quiet, the CVT works beautifully and the engine delivers robust power on demand. The all-wheel drive system also deserves credit for its sure-footedness on snowy roads. I don’t love how the advanced safety features have been integrated and I wish that the heated steering wheel didn’t cycle off so quickly otherwise the QX60 feels better than ever.

Sonar, camera and radars abound providing a wealth of techy safety features to those who go all in for the $7,300 Deluxe Technology Package. Infiniti takes the unique approach of bundling the most aggressive ones to be turned on at the steering wheel while a 2nd switch down here turns less intrusive features on and off, plus you can access even finer details in here.  I find it confusing to remember which are active and that’s the last thing you want when you’re relying on one of them to do something for you, like brake when using the intelligent cruise control.  This chock-filled convenience and safety package is also the only way to get even the most basic and desired systems such as Blind Spot Warning. 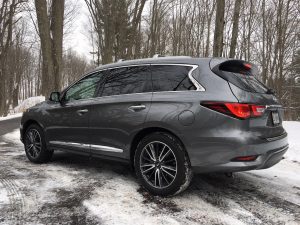 It looks like a complete redesign of the QX is at least a year or 2 away and as such there are areas of datedness in here that may be a turn off for some.

The maple accents and soft leather look rich and feel lush, the front seats are comfortable and interacting with the QX just seems right but some of the switchgear looks like old Nissan, interior lighting doesn’t shine with LEDs, and not surprisingly the electronics and various displays show disparity with the ultra-modern Buick. That said, it’s still pretty good even though it’s a little slow, there’s no full smartphone integration and just make sure the kids don’t bring Blu-rays because this Theater Package plays DVDs only.

This Infiniti innovated sliding 2nd row seats that can do their thing with a child seat in place, and they’re ability to split fold, slide and recline makes it easy to configure everything and everyone just how you want.  But with the dual moonroofs and the theater-style elevated seating headroom is a bit marginal, particularly in the 3rd row, a place where the Enclave clearly wins.  However, getting back to there from either side is easier with the tilt and slide feature here as long as you don’t want to walk through the middle because the QX60 doesn’t offer 2nd row captain’s chairs.  And from my experience, no one is going to want to sit there anyway.

I’ve never received positive feedback from any of my passengers forced into this spot.

One of the new features for 2018 takes a page from GM’s playbook by alerting the driver to possible items left in the back seats.

Infiniti calls it Rear Door Alert and it’ll remind you of anything that may be forgotten, like your groceries, dry cleaning, or dare I say the kids.

The motion activated tailgate works with a simple kick to the center and also serves to close it, but man is it slow. Continuing with the Enclave Avenir comparisons, the QX60 is also considerably smaller and thus offers far less cargo space in every possible configuration.  But you do get power fold 3rd row seats even if the switches are separated to each side, a deep underfloor storage area and grocery bag hooks.

Pricing for the QX60 AWD starts at about $46,000 and when you check off every package and then some you end up here at $60,670. While the QX60 favors uptown style, a luxurious looking cabin and dynamic performance the Buick skews more modern and techy, in general better suited to handle the rigors of family life and carrying more stuff.  The QX60 runs neck and neck with the Q50 sedan as Infiniti’s best seller and represents Nissan’s luxury division very well.