Cadillac’s crossover game is about to go to the next level starting with the all-new 2017 XT5 – the long awaited SRX replacement which gets lighter and more spacious while delivering a more premium experience.

The XT5 has only been in showrooms since this past spring and it already has outsold every Cadillac car – that’s how important trucks are to the brand which is why the XT2, XT3 and XT7 are all in the pipeline. And the SRX, now the XT5, is their best-seller. XT stands for Crossover Touring and this one is a midsize with seating for 5, comes in front or all-wheel drive and is exclusively powered in the U.S. by GM’s redesigned 3.6-liter V6 and a new 8-speed automatic transmission. 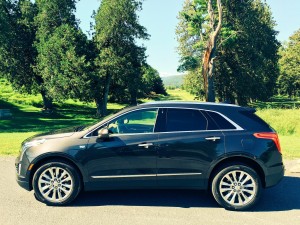 Cadillac’s focus throughout their lineup is losing weight and this one is nearly 300 pounds lighter than the SRX while at the same time delivering a 2” longer wheelbase, a 1” wider track and rear seat legroom which has grown substantially, by over 3”.

But all told, its overall length and height are marginally smaller. This also lends to a more premium and dynamic driving experience, another Cadillac calling card these days.

Getting into one is going to cost you about $40,000. But getting into a top-of-the-line Platinum like this – closer to $64,000. This one comes standard with a new driver selectable all-wheel drive system with a disconnect feature that disables power to the rear wheels for improved MPGs. When in use, it can transfer up to 100% of the available torque to either axle as well as between the tires on the rear axle so it not only performs in slippery conditions but also enhances stability in dry weather. A Sport mode is also selectable which keeps all-wheel drive on and additionally tunes the suspension for higher performance. The 8-speed auto includes shift buttons behind the steering wheel and incorporates an auto stop/start system combined with Active Fuel Management for better mileage…increased by 3 mpg, now rated at 21mpg in combined driving. Though its key stats look nearly identical to the SRX’s engine from model year 2012 and later, this one feels more alive and refined, producing 310 horsepower and 271 pound-feet of torque using regular unleaded and imperceptibly killing cylinders 2 and 5 in light load conditions to save fuel, achieving up to 26mpg on the highway.

Fortunately this maple suede interior is not the only choice. Now, the technology is very well done in typical GM fashion and the cabin overall is sleek and uncluttered.  Now, shorter drivers may have some issues getting high enough and the new age shifter is an expletive waiting to happen.

It may save space on the center console but trying to quickly get into reverse is an unnecessary annoyance. The rear camera mirror on the other hand is a welcome advancement which can be disabled if you so choose. There’s a heads-up display, key driver assistance features with a very useful surround vision system and a highly configurable and fully stocked driver information display. I’m comfortable in these oversized seats and interacting with my iPhone via Apple CarPlay while connected to the fast in-car Wi-Fi hotspot couldn’t be easier. Android Auto is here, too. Plus, I’m a big OnStar guy and like that added level of service. The navigation graphics should be modernized, however. Those in the back can slide and recline their seats which are slightly elevated and have access to their own heated outboard positions and climate control. Overhead is the ultraview sunroof which always lends to a spacious airiness. Cadillac’s hands-free tailgate is a bit different and temperamental at times in that you have to kick your foot under the corner of the bumper but it opens to a an even bigger cargo space when the rear seats are folded – accomplished with levers on both sides. There’s also an adjustable divider and an optional cargo net.

The 20” wheels on the Platinum trim also come with a Continuous Damping Control System and the suspension sufficiently handles broken roads but it’s not as soft or as quiet as I’d prefer – something that could separate it from the competition. Additional ride bushings also give rear seat Platinum riders greater comfort.

I like the XT5 but I’m not sure Cadillac has done enough here to distinguish it from the others. This Platinum trim has a nice array of features and its drive is smooth and competent but it’s pricey and I can think of 2 similar vehicles I’ve tested recently that left even more favorable impressions; the Lincoln MKX and the Lexus RX 350 F SPORT, the latter of which is considerably less expensive.