The E-Class, the 5 Series and the A6; these are the midsize sedans that used to define executive German motoring.  But we all know the direction in which these types of automobiles are headed as evidenced by the fact that Mercedes now sells twice as many SUVs as they do cars. 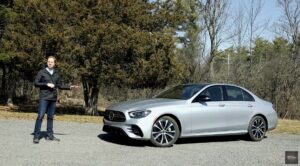 So the question here is will this 2021 refresh of the E-Class be enough to halt its precipitous sales decline? 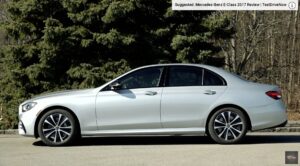 This 10th generation E-Class debuted for the 2017 model year at which point I tested the entry-level E300 and was most impressed with its semi-autonomous driving capabilities, beautiful styling and modern luxury.  Four years later and the E-Class ratchets up the cabin tech, tweaks the exterior styling and introduces a new electrified powertrain to this step-up E450 model.  4Matic all-wheel drive is standard and of course, there are all sorts of ways to upgrade and customize just like this car has been taking it from $62,000 to $82,000. 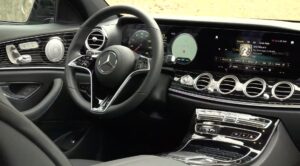 That price scares me a little bit but putting money aside for the moment, this E450 is a very satisfying way to travel.  With the air suspension, rapid heating for the massaging, leather seats, increased cabin isolation via acoustic and heat absorbing glass, the air balance fragrance atomizer and a Burmester Surround Sound System, spending time in here is akin to a day at the spa.  At least for those in the front… 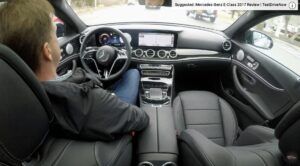 Fitted with $20,000 in options this E450 certainly isn’t cheap which is why I’m surprised that the rear seats aren’t heated, there are no climate controls, no USB ports and no sunshades…so a baby S-Class it’s not. 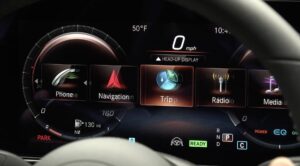 Up here is where it’s at with the latest Mercedes touchscreen infotainment system, widescreen displays that span from in front of the driver all the way to the central unit, and all of the latest technology found within such as augmented video for navigation, the Mercedes assistant that reacts to natural voice commands and the best speech recognition software in the industry. 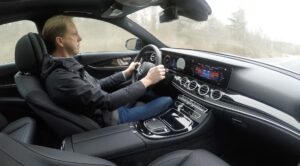 It actually works as well as talking to your phone.  The big omission still is no wireless phone pairing and because USB-C is all there is here my iPhone requires an adapter cable making this area where the wireless charger is even more of an annoying mess while also taking the cupholders hostage.  But by-in-large this is an excellent, cutting-edge setup that I’ve previously experienced in other Mercedes models. 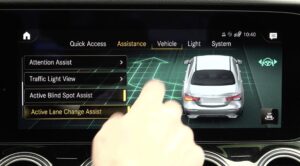 Now, the screen is a bit of reach so you can also use this touchpad and some other redundant buttons to control it but one change this year bothers me; the little thumbpads on the steering wheel which used to control this system, which I liked and found easy to use, have been replaced with touch sensors that require more finesse and busy up the wheel. 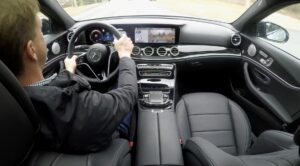 But the level of features here and level of customization is off the charts.  And that extends to the head-up display that shows as much or as little info as you want.  And at night, the plethora of lighting schemes makes this one very cool cabin.  If you want to wow your friends take them for a spin after sunset. 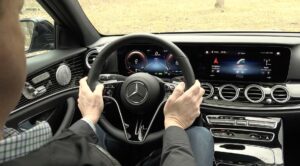 Three years ago this model’s name transitioned from the E400 to the E450 when the V6 was upgraded to produce more power.  And this one here still churns out the same 362 horsepower and 369 pound-feet of torque but the 3.0-liter engine now has its 6 cylinders arraigned in a row and receives a boost from a small electric motor that can add a quick shot of up to an additional 21 horsepower and 184 pound-feet of torque.  So this car is a tenth of a second quicker to 60mph but perceptually it feels even more reactive.  But speed is not this new mild hybrid’s main goal…its gas mileage and that improves by 13% while extending the driving range by 64 miles. 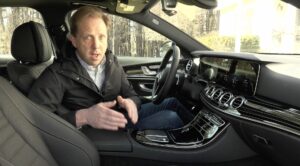 It’s called an integrated starter generator and it’s positioned between the engine and 9-speed transmission combining the functions of a starter and an alternator.  Leveraging the new 48-volt electrical system which provides 4 times the juice as normal, it allows for power boosting and fuel saving hybrid functions, super smooth and long event engine start/stop functionality and an electric compressor that completely eliminates turbo lag. There are other benefits too like making the engine shorter and lowering the noise level.  To you the driver, it translates to effortless, graceful power delivery and immediate and downright fast acceleration.  It’s shockingly quick in passing maneuvers.  And this car is rated at 26mpg in combined driving, on premium of course, which is very impressive considering the stealthy performance which lies within.

The hallmark characteristic of this E-Class are its beautifully, soft, sumptuous and dynamic drive that is just oozing with high-class refinement.  The E450 has been designed to melt away stress and deliver a buttery smooth experience.  It’s the strong/silent type with robust power and impeccable handling in the luxury sedan vein.  So choose a massage program, up the fragrance level and heat up all the touchpoints; the E450 embodies relaxing precision and is an absolute delight to drive. 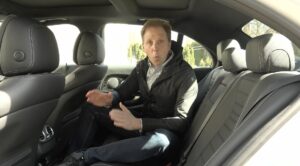 The handling, even on these downsized winter tires, is an education in eliminating body roll and holding the perfect line.  Sport and Sport + drive modes modify the air ride as well as other drive components to heighten the excitement in a car that never gets ruffled.  And then there’s the semi-autonomous and safety stuff…it’s not hands-off Super Cruise good but it’s as close to that as anything else currently going with lane change assist and long periods of hands-off driving if you wish to play with it.  In stop and go traffic there’s very little you have to do as the driver. 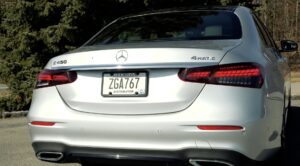 I feel like the updated styling is actually a step backwards…it’s taken on a bit of that droopy Sonata look in the front end it appears even more anonymous now than before.  Even with the step-up engine in the E450 the design just doesn’t move the excitement needle in any way.

And that’s probably my biggest turn off.  I know the AMG variants exist for that sort of flash and that the E is understated by design but for $82 grand I need a little more wow factor from my car. 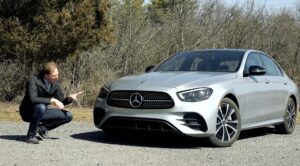 But the E450 is undoubtedly a rich, robust car with goodies for days that drives like a dream.  Those still paying attention to cars will be rewarded.