Earlier this decade, pundits predicted that a gallon of gas would cost more than $5 a gallon by now.  Well, they were wrong.  Really wrong.  And so the SUVs which were declared dead and almost buried have experienced a boon like never before.  And here comes one of the big boys; this is the all-new 2021 Chevy Tahoe. 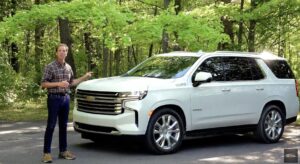 GM dominates this segment.  Between the Tahoe, Suburban and their GMC counterparts they sold over 225,000 of these very large SUVs last year.  Their natural habitat is the boat club and the parking lot outside the school gym.  Affluent owners use them to tow their toys and haul their kids’ hockey gear. 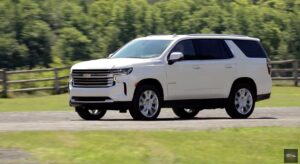 So when it comes to this new Tahoe, Chevy has vastly improved upon its usability but first let’s discuss what hasn’t changed.  This top-of-the-line High Country model comes standard with the carryover 6.2-liter V8 with its 420 horsepower and 460 pound-feet of torque mated to the same 10-speed auto and it’s still capable of towing the same 8,100 pounds. 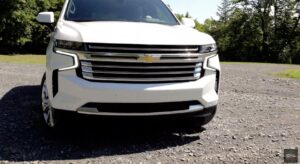 But despite its identical stats, this Tahoe barely resembles its predecessor in a number of key areas. 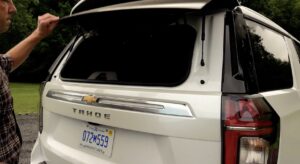 Already renowned for its massive size, the Tahoe has gotten even bigger: a whopping 6.7” longer.  This leads to huge increases in max cargo room and legroom in all 3 rows finally making the most efficient use of this rig’s gargantuan footprint. 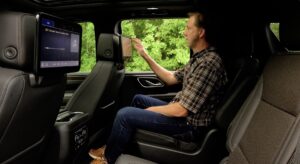 For the first time, the Tahoe’s second-row seat can slide, adjusting approximately 10 inches fore and aft. Both the second- and third-row seats also fold more easily, and the load floor is now both flatter and lower than prior models – making the Tahoe easier to use. 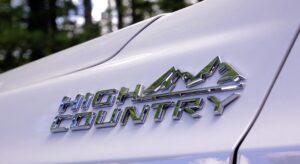 But the biggest news is the independent rear suspension because it has such a huge effect not only on ride and handling but also in how it handles its passengers and cargo. 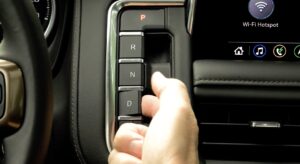 Getting rid of the solid axle and stretching the body results in a number of benefits: 1) The easy access 3rd row of seats gains 10” of legroom and the occupants’ knees are no longer up around their chins.  2) Getting stuff in and out of the back is easier for mom and little Bobby because it’s not as far of a reach with the lower lift over height and 3) the Tahoe’s ride and handling is better by a factor of 10. 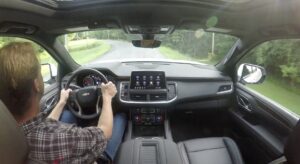 Especially when you throw in another $1,000 for the air springs and their 4” of height adjustability.  They sound a little like an 18-wheeler when they’re blowing off air but their contributions to the already magnificent Magnetic Ride Control shocks and the Tahoe’s versatility make it money well spent. 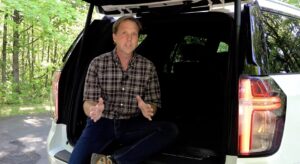 Super smooth, quiet, and dialed in – this modern full size truck platform combined with the new rear suspension and air springs creates a very impressive drive that’s far more sophisticated than ever before. 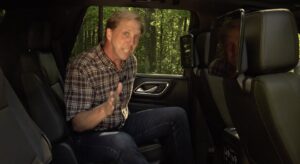 This Tahoe can steer and take on a twisty road while never ruffling its occupants…far more impressive on road than the $100,000 Lexus LX I just tested. 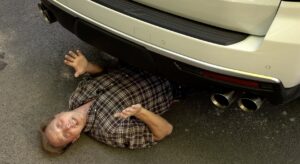 And that’s the headline: New Tahoe drives better than ever while giving users more room. 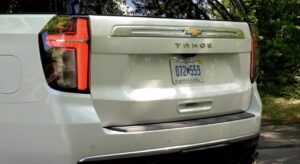 This is Cadillac-level refinement from behind the wheel.  And it’s really hushed in here.  If I was taking a long trip with the family, this is the one I would call upon. 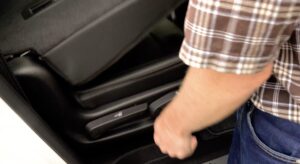 The power-folding 3rd row seats are quick to move and not annoyingly slow like most others but getting the 2nd row seats to drop requires manual operation. 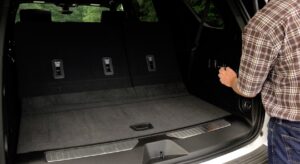 And voila, there’s your flat load floor with massive amounts of cargo room.  Now, when the seats are upright and occupied the Rear Seat Media System gives the kids a modern way to stay connected, allowing them to enjoy their music and videos via a tilting touchscreen that even provides access to the navigation system…on second thought that could be dangerous. 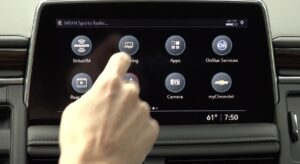 This is part of my tester’s most expensive option; the $3,355 Technology Package.  Also bundled in there is the Advanced Trailering System with Side Blind Zone Alert which covers all the way through the trailer.  And take a look at all of these goodies to make you feel more confident when there’s something in tow including 9 different camera views to get the positioning just right. 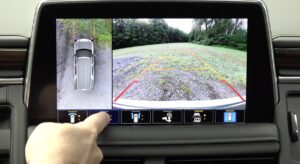 But as I often opine, initiating the camera should be as easy as pressing a real button and not one hidden in the touchscreen.  Per usual, GM’s electronics are excellent and easy to use with items like a brilliant heads-up display, rear view camera mirror, vibrating safety alert seat and automatic climate controlled seats.  And wireless CarPlay and Android Auto just seal the deal on the infotainment side which is already very strong. 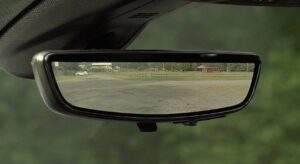 But here’s the problem; this is the High Country…the most luxurious trim.  And it costs over $82,000.  So this just can’t be.  You wanna charge big bucks?  Fine.  But this cabin looks like every GM truck I’ve stepped into over the past 20 years. 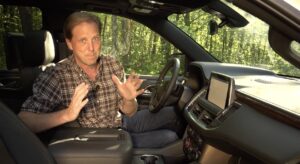 I asked the GM design team if they felt like they had gone far enough in this regard to attract true luxury shoppers and they told me they were confident that they had.  But isn’t this just history repeating?  The new Silverado suffered from the same lackluster interior and it’s being redone for the 2021 model year.  So despite how good the new Tahoe is and it is indeed noteworthy, this would give me reason for pause.  Another is the abysmal gas mileage that has gotten worse and gets decimated by the Ford Expedition’s more powerful turbo V-6.

This one is rated at 16mpg in combined driving and it’s the only engine in its class that wants premium gas so be prepared for $80 fill-ups. 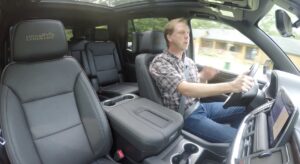 My quicky 24 hour test-drive reveals a Tahoe that’s still truck-based but far less trucky.  It’s greatly improved in a number of ways yet still has a little work left before the High Country can truly elevate itself.