Posted on December 31, 2013 by TestDriveNow.com 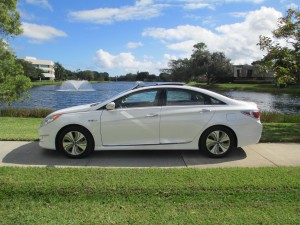 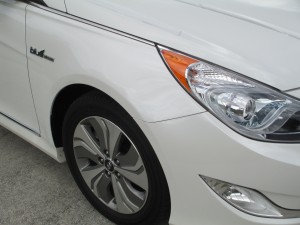 As in previous Sonata Hybrids, the 2013 Sonata Hybrid features a clutch to decouple the gasoline engine from the drivetrain. When in pure electric drive, the Sonata Hybrid can drive electrically up to 75 miles per hour.

Maximizing electric-only driving results in higher fuel efficiency, which is the leading factor car buyers look for in a hybrid vehicle. Hyundai engineers aimed to increase the overall amount of available electrical drive power and improve the efficiency of the Hybrid Blue Drive operating system in the 2013 Sonata Hybrid. 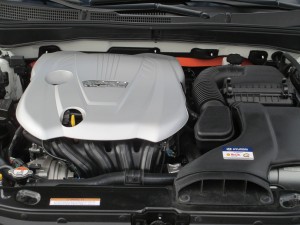 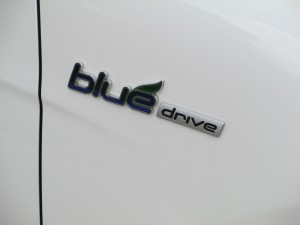 The 2013 Sonata Hybrid utilizes the all-electric mode at optimal moments such as highway driving, then saves the gasoline engine start-up for roads that require a heavier dose of power. All of this translates to money saved for the driver.

The remarkable achievement with 2013 Sonata Hybrid’s 47 kW lithium polymer battery pack is that not only is it more powerful and more energy dense, but also weighs less and takes up less volume in the trunk. The weight of the pack has gone from 96 pounds to 91 pounds, while trunk volume has increased from 10.7 cu. ft. to 12.1 cu. ft. Once again, the improved efficiency of the battery pack is key to recovering more kinetic energy from braking and charging from the engine, when needed, to help propel the vehicle. The newly optimized system allows the battery to store more usable energy, allowing more all-electric driving, cutting both fuel consumption and emissions.

As the upgraded battery stores more energy, engineers also increased the output on the electric traction motor from 30 kW to 35 kW. The increased energy pulled into the system is used for higher torque output in electric drive mode before the system has to start the internal combustion engine. The 2013 Sonata Hybrid can now sustain all-electric mode longer than the previous system. These changes deliver both improved fuel economy and drivability. The higher output electric motor is also essential to improving energy capture during regenerative braking.

The HSG is primarily used to improve clutch engagement when synchronizing engine to transmission speed. The primary traction motor is coupled to the transmission and cannot be used to charge the hybrid battery when the car is stationary. If the battery state of charge is low and the car is stationary, the HSG will automatically restart the engine, which then charges the Lithium Polymer battery pack.

When the driver releases the brake and presses the accelerator, the Sonata Hybrid will pull away smoothly in electric drive mode with the clutch still disengaged. In this mode, the Sonata will briefly behave like a series hybrid. Once the car is in motion and torque demand increases, the clutch will engage and send engine tractive effort through the transmission again.

In addition to improving efficiency, Hyundai engineers set their sights on improving drivability with the following: 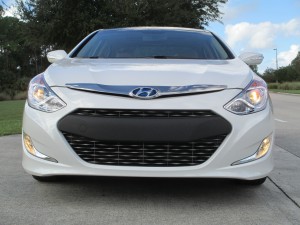 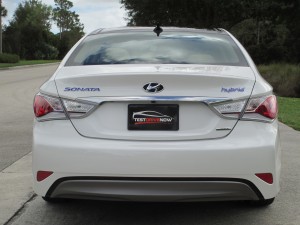 The body of the 2013 Sonata Hybrid remains unchanged, but it still features the unique exterior that sets it apart from other Sonatas. The combination of a re-shaped front and rear fascias with a deeper air dam, extended rocker panels and lower drag wheels allow air to flow around the body with less resistance. The drag coefficient for the Sonata Hybrid is an exceptionally low 0.24 that compares favorably to the Porsche 911 GT2 RS (0.34) and the Nissan GT-R (0.27).

The ability to easily slip through the air, combined with low rolling resistance tires and the reduced friction in the newly optimized Hybrid Blue Drive powertrain, significantly reduces the amount of energy required to maintain highway speeds. The result is the remarkable highway fuel efficiency of the Sonata Hybrid.

The 2013 Sonata Hybrid comes with Hyundai’s Hybrid Lifetime Battery Warranty. The coverage expands the benefits of Hyundai Assurance, the industry’s most comprehensive warranty program, including an unsurpassed 10-year powertrain warranty.

The Hyundai Lifetime Hybrid Battery Warranty ensures that if the Sonata Hybrid lithium-polymer battery ever needs replacement, Hyundai will replace the battery and cover recycling costs for the old battery pack free-of-charge to the original owner. The coverage is not transferrable, and does not apply to lease and commercial vehicles or vehicles serviced outside the U.S. 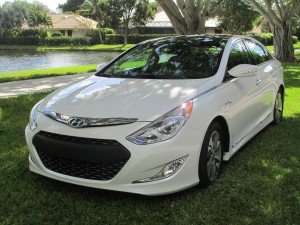 The Sonata Hybrid, with Hyundai’s improved Hybrid Blue Drive technology, has always featured a lithium-polymer battery pack, making Hyundai one of the first automakers in the world to incorporate this remarkably efficient battery technology into production vehicles. Lithium-polymer is the next generation of lithium-ion technology and is ideally suited to automotive applications thanks to a particularly robust and reliable chemistry. 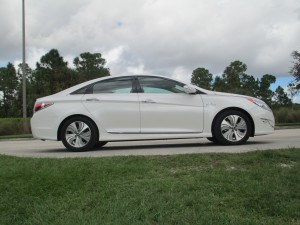 The lithium-polymer cells, developed with Hyundai’s partner LG Chem, use a manganese-spinel chemistry that provides an excellent compromise between power delivery, energy density and thermal stability. Thermal stability is critical to ensuring durability, effectively eliminating the need to replace the battery pack during the normal lifespan of the vehicle. The electrodes in older lithium-ion chemistries expand and contract significantly with the heating and cooling that naturally occurs during charging and discharging. This thermal expansion causes cracks in the electrodes which ultimately reduces the cell’s ability to hold a charge. Manganese-spinel lithium-polymer cells have much lower expansion rates and are thus able to go through tens-of-thousands of charge cycles even without having to use a heavier, liquid-cooling system.

The Sonata Hybrid MSRP is $25,650, excluding $795 freight and includes the following standard equipment: 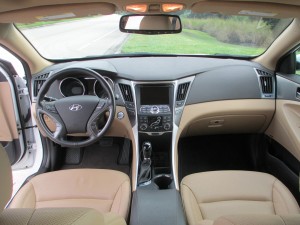