Remember Mr. Fuddy-Duddy’s reaction when Porsche first announced that they were going to be building an SUV? 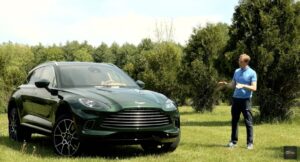 There was outrage that a sport car company would ever do such a thing.  Well, now you have Rolls-Royce, Lamborghini, Bentley and others all building them without shame.  So it’s no surprise that Aston Martin would join the fray and so far the DBX is raking in the sales. 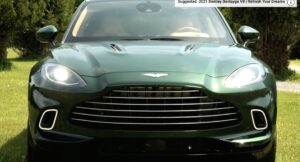 The brand’s most popular and affordable car is the Vantage but the DBX has gobbled up 50 percent of Aston sales since global deliveries began last summer.  With a starting MSRP of $180,000 its clientele is obviously limited so exclusivity is standard.  This is the British brand’s first go at an SUV and the first Aston Martin to be hand built at their new manufacturing facility in Wales. 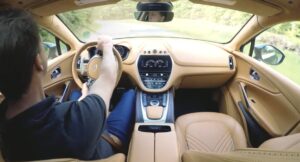 The company says the DBX will increase their presence in markets where the weather or terrain is less than conducive to rear-wheel drive sports cars and will also appeal to customers who prefer to be driven rather than drive.  And in the U.S. where SUVs are king the DBX will court the wealthy, trying to steer them away from other luxury SUVs such as the more established Bentley Bentayga. 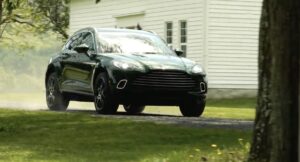 So what we have here is a 5-seat, all-wheel drive sport-utility with dimensions not too dissimilar from an Audi Q7 but without the 3rd row.  Like many of these types, it runs with a 4.0-liter twin-turbo V8, comes with an air suspension and works through a 9-speed auto.  The aluminum-intensive body keeps the curb weight below 5,000 pounds, there’re 6 selectable drive modes, a limited slip rear differential and standard 22” wheels.  This Buckinghamshire Green is a special paint you won’t find on the configurator – a $6,100 option and all told this DBX sits before you at $205,186.  Gas mileage is rated at 15mpg in combined driving. 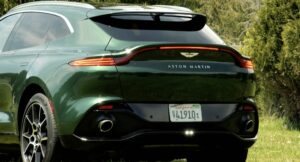 Now, 2 things have surprised me this week.  1) I don’t love the DBX nearly as much as I thought I would and 2) despite the prominent Aston Martin badge it barely garners a look.  The rear end styling is very distinctive and attractive but the front suffers from the same amphibious traits that plague the Porsche Cayenne’s styling.  I thought I’d feel like a rockstar in this thing and I couldn’t have been more wrong. 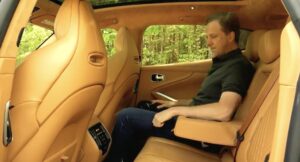 Reach over to the center of the dash, fire it up and the sound is less ambitious than I expected – especially considering the Sport Exhaust Upgrade.  GT is the default drive mode for relaxed usage but even in Sport and Sport + the DBX never lets its pipes really scream. 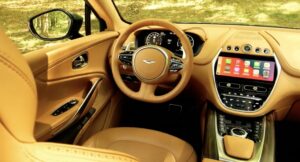 And with Accoustic Privacy glass and other noise reducing measures, the DBX’s sporty sounds are equally restrained inside.  They’re present but always appropriate. 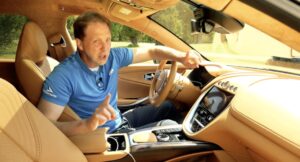 The shifter for the 9-speed auto is also located up here – a cool look indeed but certainly not the most convenient placement.  Did you know that Aston hasn’t designed their own engine since 1968 and that Daimler owns 20% of the company? Well, you do now and though that relationship is critical to Aston’s future it doesn’t always manifest itself in the most appealing ways. 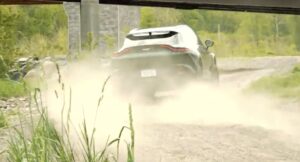 Ok.  Are you ready for some tough love?  Because putting the drive aside for the moment, which I really do like, the DBX too often feels like a concoction put together after Aston visited a Mercedes garage sale.  You know; it’s all the stuff Mercedes doesn’t really use anymore.  And from that perspective I can’t really find a scenario other than the rich guy who just needs to have what no one else does, where I would spend over $200,000 on an SUV like this considering I can buy one from the company that provides all of this stuff, who makes a more modern and faster one. 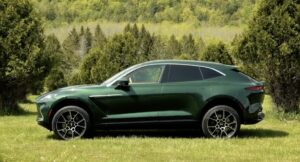 I’m speaking of the AMG GLE 63 which sells for $62,000 less and left much of this behind years ago.  Even its shared AMG engine is more powerful and sophisticated in the Benz than the version Aston has tuned here to their tastes. 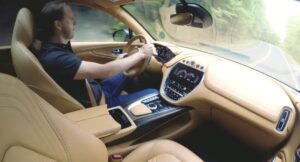 Now, when I say I like the drive I mean out here in sport mode by myself where the DBX is really allowed to strut its stuff.  The exhaust note becomes stronger, the throttle more responsive and the handling more like one of their sports cars.  But I can’t really say the DBX elevates the genre.  I mean I can think of at least a half a dozen other performance SUVs that I have driven that have impressed me for less.  And as for its everyday SUV duties it’s kind of a dud.  I mean the ride is really stiff, sitting in the rear seats is like sitting in timeout, and I have to say where is all the stuff?  I mean for $205k I expect to see some goodies in here and the DBX has very few. 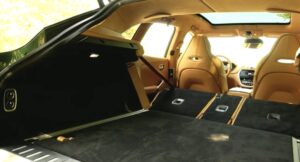 This very tan interior is a little much for my eyes but for those who geek out over special stitching, veneers and that sort of thing will delight in the DBX’s cabin.  And I’m surprised to read that Aston enlisted kids to test out these rear seats and this was the outcome?  They’re nonadjustable and sit low with a forward view of the front headrest as the seatbelts cut across the neck like mini guillotines. And I don’t see barf bags on the options list.  And no matter what mode you’re in the ride is very firm.  On the bright side, these seats are heated and cooled, there’s a huge glass roof with sunshade, and when it’s time to fill up the cargo area there’re controls to lower the body via the air springs, the seats have power release buttons but don’t completely powerfold and there’s a rack system for securing gear.  Too bad there’s no foot activated liftgate, though. 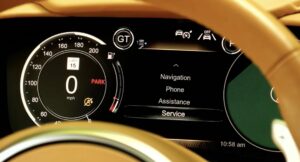 The electronics both in front of the driver and over on the center stack are vintage Mercedes.  There’s no touchscreen functionality so you have to use speech or this rotary controller to get around.  There’s wired Apple CarPlay but no Android support.  No wireless charging, no head up display, no rear view video mirror, no massage, no logo projection.  There are soft close doors with weird handles, ambient lighting choices for a little pop at night and clever storage under the console bridge.  But even the driver assistance features are first gen rudimentary such as lane keeping with steering assist which does an awful job on the highway.  So the times when I’ve really enjoyed the DBX haven’t been with the family on board, but rather when I’ve gone out for a spirited drive.

The difference between the default GT mode and Sport is significant and it is here where the DBX really starts to feel like the Aston Martin that it is.  It is rambunctious and not overly polished which I like because then it actually feels like I’m driving the vehicle.  But these really gummy, wide tires do interfere with the steering just a bit otherwise I could paddle shift this DBX on backroads all day. 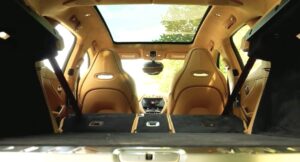 542 horsepower and 516 pound-feet of torque lead to a 0-to-60mph time of 4.3 seconds – quick for sure but a GLE 63 S can do that in 3.7.  And these staggered Pirelli P Zeros – which will have to come off in the winter and go for as much as $650 per, keep the steering a little twitchy.  The cabin is very quiet but the driving range of 338 miles is somewhat limited.

When venturing off-road the air suspension can give you a big lift for some serious ground clearance of over 9 ¼” and there are drive modes for that as well.  Towing is maxed at 5,940 pounds which is light for this class. Numerous packages are available such as the Snow Package which includes boot warmers and a Pet Package with a washer for muddy dogs.  But I haven’t found the level of desirability here I thought I would.  And if it was a luxury British SUV I was after, I’d stop by Bentley first.