While the compact and 3-row SUV segment has been growing by leaps and bounds, this 5-passenger midsize type has been getting squeezed out. But with our insatiable appetite for utility vehicles these too are on the comeback. This is the all-new Blazer. 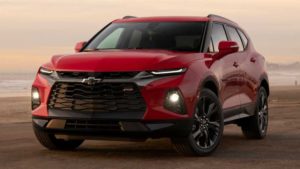 When we last saw it a decade and 5 cogs ago, the TrailBlazer was an American-built, body-on-frame sport utility whose key competitors included the Ford Explorer and Dodge Durango…models that’ve since moved on to the 3-row arena.  Having its name pruned once again to simply Blazer, this 2019 Mexican-made reboot weighs nearly 300-pounds less, now arranges its 6-cylinders in a V formation, produces more horsepower but less torque and improves MPGs by over 30%; collectively, a microcosm of the industry’s evolution during its 10-year hiatus.

Similar in length, wheelbase and ground clearance to the TrailBlazer before it, the new Blazer is marked by daring design and robust levels of technology.  This one here is the sporty RS trim with a host of distinguishing traits and blacked-out features that lend it a Camaro-like persona.  Not for the introverted, the Blazer RS is a visually stunning specimen with a futuristic patina and crazy 20” Dark Android wheels.  So you see it and think it’s going to be all spicy and sonorous, but in reality it’s soothing and serene.

The Blazer’s design says racy but this SUV is more of a teddy bear, with the headline being quiet and soft.  This RS trim is all about style and the V6 is very strong but the Blazer coddles its occupants with automatic everything and technology that doesn’t fight you.  For something that looks this cool though there’s not a lot of excitement here. Over 300 horsepower produces some torque steer when you step on it and while the 9-speed is typically very smooth there is one exception; in stop and go traffic it tends to lurch ahead as you slow down and start again…something GM should address with a software update because it sullies an otherwise pleasing experience.

Though a large one – this is the Blazer’s only real gaffe and it seems like something that could be addressed with a software update.

This V6 can be found in over a dozen current GM products and here it’s rated at 308 horsepower and 270 pound-feet of torque so acceleration feels more than adequate and the all-wheel drive system is the one utilized in recent Buicks – sourced from driveline supplier GKN, it incorporates torque vectoring technology to help steer the vehicle making on-road performance more stable and dynamic as well as enhancing off-road capabilities. Plus, it makes the setup more fuel-efficient by providing an AWD disconnect; driver selectable when not needed.  Other modes include Sport, Off-Road and Tow that affect steering effort, shifting, torque distribution and traction control with a simple twist of the knob.  And I’m all about the Blazer’s forgiving, compliant suspension tune and hushed, Buick-like cabin while at the same time appreciating its gutsy motor and precise yet relaxed drive.

On a cool day like this as soon as I fire it up my heated seat and steering wheel automatically go into action. I like the simplicity of the controls and the intuitive use of technology. And the Blazer has a healthy dose of that with wireless device charging, WiFi hotspot, the Marketplace feature that provides convenient access to a number of food and service vendors, the safety alert seat that vibrates the bottom in the direction of potential dangers, the customizable gauge display, air vents that double as thermostats, auto high beams and dynamic radar cruise control. But the look and feel of it all doesn’t match it’s over $48k price tag.

The RS AWD is priced from just under $45,000 while other less adorned trims with 4-cylinder power start in the low $30s.  With everything you see here including the Cadillac-esque rearview camera mirror, MSRP is $48,270 and in that lofty air I just need a little more luxury in the presentation.  I also need a 360 degree camera button that’s not buried within the touchscreen.  And heck, might as well throw in a heads-up display.

The rear seats benefit from tilt and slide functionality as well as a flat floor so 5-passenger accommodations it truly is.  There’re also heated with additional USB ports.  A panoramic roof is optional.  And then in the back, the bowtie projection automatically triggers as you approach to show you precisely where the foot activated sensor is, and cargo management is more thoughtful with a sliding divider, lots of cubbies, underfloor storage and remote levers to the drop the rear seats.

Bigger than the Equinox and smaller than the Traverse, the Blazer fleshes out Chevy’s SUV lineup with a boldly-styled yet quietly composed midsized comeback.