Land Rover’s flagship Range Rover model has been refreshed this year with some aesthetic, comfort and technology updates. And it’s still available with one of the best Diesel engines on the market. This is the high-mileage, long-travel Range Rover Td6. 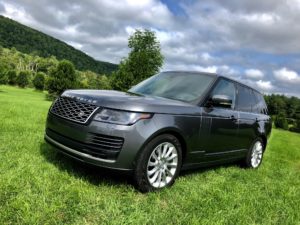 Without electrification, you won’t find an SUV this size that returns a legit 24mpg. Weighing nearly 5,000 pounds, the Range Rover diesel’s 22mpg city/28mpg highway rating is as much as 29% more efficient than the supercharged gas models.  And as you well know, the Range Rover isn’t some poseur – this is the pinnacle of off-road capability.  Out of the 6 Range Rover models from which to choose, the Td6 as it is known is ranked second in terms of price, with a starting MSRP of $91,855 including destination.  Fully outfitted as this one is with the Driver, Vision and Towing Packages, Adaptive Cruise Control with Stop & Go, heated steering wheel, four-zone climate control and a host of other lower-priced options, the MSRP is $111,735.  British SUV opulence definitely comes at a cost.

Having driven this exact model a few years ago I knew what to expect; a big, brawny, whisper-quiet, diesel-powered utility vehicle that encapsulates you in a hermetically sealed cabin. But there are updates for the 2018 model year.  Though far from radical, there’s an updated exterior design with new LED headlights.  But most of the new stuff can be found inside, including front seats that are wider with greater recline, legroom and foot space, power rear seats that are also wider with substantially more legroom replete with new power folding functionality allowing you to easily switch to cargo mode from multiple locations…even from a smartphone app!  And quiet just got quieter with thicker glass to reduce sound intrusion – this very well may be the quietest cabin on the market, and with a diesel no less.  There are bigger stuff-it spaces, an AC outlet in the rear, an air cleansing cabin ionization system, not 1 but 3-zone ambient lighting control, and a host of new screens and electronic goodies trickling up from the new Velar.  Now in its 6th year of the current generation, these updates certainly help, but…

Despite the model year updates the Range Rover is having difficulty fighting Father Time, and at over $100k it no longer feels or looks special enough to warrant the big price tag. Its vault-like cabin and air carpet ride are exceptional but balky electronics and less than inspired cabin design give reason for pause.

I’ve already played with this dual screen setup in the Velar and it looks spectacular – particularly this new lower screen with its high res, colorful graphics. Information is spread out between the 2 touchscreens and it works quite well – that is when it’s working as designed.  It’s a little slow to react at times and some gremlins in this tester glitched it out more than once during my week with it doing weird things like going to a blank screen, killing the stereo and not allowing access to the 360 degree camera.  The Meridian Surround Sound System is a phenomenal experience and the drive mode controls look very cool down here.  But inControl Apps just isn’t as good or in-depth as CarPlay or Android Auto and as such this overall system gets knocked down a rung.

As a runner, I love the idea of this Land Rover Activity Key. It allows you to lock the bulky key fob inside the vehicle so you don’t have to carry it with you.  Plus, it’s waterproof and shockproof.

Just place it over the ‘R’ and voila…you’re good to go. Some of my other favorite features are the new gesture controlled panoramic roof, opened and closed with just a hand motion, easy trunk loading with the ability to lower the air suspension from rear switches plus the bottom half of the tailgate makes for a fun place to sit, the next gneration big, bright, head-up display with all kinds of useful information, and lots of smart features throughout like how the vehicle squats to aid in getting  out, and how the sunshade automatically closes on hot days after you leave.

But the very best part of the Td6 is its drive…as luxuriously tuned as any car or SUV available. It floats down the road and yet avoids any sloppiness.  There’s also a dynamic mode when you want to kick it up a notch and an Eco setting for sipping even less diesel.  There’s even a start-stop system here.  The Range Rover’s unusual shape makes for great command at the wheel where the road ahead is very easy to see.  And of course, it has all of the Terrain Response 2 programs for going off-roading.  The Advanced Tow Assist system makes easy work of backing up a trailer by doing all of the counter steering for you – good for hauling up to 7,716 pounds.  At 7.5 seconds to 60mph this is the slowest Range Rover model, but that 443 pound-feet of torque makes every pedal push feel robustly fortified.  This 3.0-liter turbo diesel makes 254 horsepower.

The Td6 possesses the best combination of quietness, smoothness, and torquey goodness you can buy. Plus, it nets 24mpg and can drive seemingly forever on a single tank.

545 miles to be exact. Unlike the smaller diesels I’ve driven from Jaguar Land Rover, this one is superb.  You’d never even know it was there.  It’s particularly attractive to high-mileage drivers who spend most of their time on the highway.  According to the EPA, it’ll save the average owner $3,500 in fuel costs over 5 years when compared with the 6-cylinder gas engine.  The diesel engine adds $2,000 to the vehicle’s price.

Diesel’s future may be as dark as soot, but at least here Land Rover makes a convincing case.