Though the future of the traditional family sedan looks uncertain right now there are a few brands out there that wouldn’t ever consider dropping these kinds of cars from their lineups. Case in point: the Honda Accord which continues to make a valid argument in an SUV world.

So as not to bury the lead, this all-new 10th generation Accord is really good at its job, which is to play the role of family hauler, perhaps treat you to a night out on the town with or without friends, confidently handle any kind of road including the curvy ones and stimulate the senses while at the same time providing Honda-level ease of use.  Oh, and it can be trimmed to the hilt for under $37,000.  Sounds like a winning formula to me and despite consumers’ waning interest in traditional cars, with other competitors dropping out of the game the Accord should still be able to strike a chord with shoppers who simply don’t have any interest in a crossover or SUV. 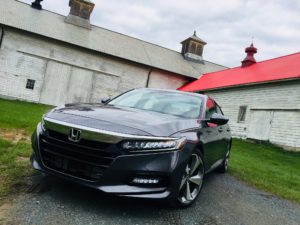 Over the past couple of years, Honda has been designing their vehicles with more visual flair – boring has been shelved in favor of lots of cut lines. Now, I wouldn’t go as far as to say it’s beautiful but its Audi A7-like profile, 19” food processor blade wheels and multidimensional front fascia make for an exciting, look-at-me style that turns heads.

When you’re shopping the Accord sedan – no more Coupe, by the way – the 5 trim levels begin at under $25,000 with the base LX. Go to the top rung and you arrive here at the Touring with the optional 2.0-liter turbo and 10-speed automatic transmission.  Including the destination charge, MSRP is $36,690 and that includes everything the Accord offers.  This is the trim for those who want the brightness and bling of full-LED headlamps, an excellent head-up display with traffic sign recognition including a steering wheel button for easy control of its functions, the convenience of wireless device charging for compatible phones, automatic Bluetooth phone pairing via Near Field Communication – accomplished by placing the compatible device near this dash symbol, ventilated front seats, and for the driver – an adaptive damper system with sport mode that constantly adjusts the suspension to the road surface for the best, most sophisticated ride the Accord offers. And if the Civic and CR-V’s 192 horsepower engine and continuously variable transmission don’t excite you, this 2.0-liter turbo from the Civic Type-R will do the trick.  With up to 21 psi of boost in the Accord application, output is rated at 252 horsepower – down from the previous car’s V6 – and 273 pound-feet of torque – more than before leading to greater responsiveness and acceleration, spinning the front tires on its way to a 0-to-60mph time of around 6 seconds.  It’s not juvenile either, with a refined linear output free of virtually any turbo lag.

Though we can lament the loss of the V6 this new turbo will quickly shift your perspective to that of admiration. Because it’s power dense, ready to go in any gear and yet fuel efficient. At idle you can feel its reverberations and having just come off a week with the silky smooth 3.5-liter motor in the Acura TLX, it can’t match its former engine’s polish. But this thing is as quick as a family car needs to be and though it’s no sports sedan it’ll satisfy the driver looking for more.

The cabin is luxuriously quiet and the ride quality is soft but composed when driven hard with the front end washing out when taken too far. Again, just for comparison’s sake, the TLX can drive circles around this car – but that’s not the Accord’s mission.  This is a well-balanced machine with a huge backseat and price tag that’s up to $10 grand less.

More passenger and cargo volume make the Accord feel like a large car. It’s elegantly simple too – not an easy task with the avalanche of technology in here.  The infotainment is done right.  A touchscreen with knobs is THE solution.  It has all of the ease of use and connectivity I look for.  The push button transmission isn’t the easiest to engage when you’re maneuvering quickly but the gear changes themselves, plus paddle shifters plus Sport mode makes for a smooth, engaging driving experience.  Ergonomics are excellent completing the car to driver handshake in a very positive way.  It’s comfortable – unless you’re short and in the passenger seat which for some reason Honda skimped on height adjustment.  And while there are heated rear seats, there are no USB ports back here and kids want that.  The Accord also doesn’t do a kicking motion trunk opener which is too bad.  On the other hand, Honda Sensing is standard no matter which Accord you chose.  Adaptive Cruise Control with low speed follow, Collison Mitigation, Lane Keeping Assist, Road Departure Mitigation – it’s all here.

If you want the raciest Accord you’ll take a fairly substantial hit at the gas pump where at 26mpg in combined driving the bigger motor drops 7mpg to the little turbo and the CVT. Manuals live too, but just on Sport trims.

If you’ve yet to be swept up by the crossover SUV craze it’s reassuring to know there are still cars like the Accord with considerable appeal.