When you’re shopping the F-PACE you’ll have some decisions to make regarding engines and trim levels. One of which is a diesel R-Sport.  Why would anyone choose this particular model?  Well, that’s what I intend to find out. 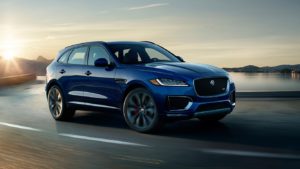 Now in its 2nd year of production and predictably the brand’s best-selling model by more than 2-to-1 over the XE sedan the 2018 F-PACE is available in a dozen different flavors with a foursome of turbocharged or supercharged 4- and 6-cylinder engines ranging in price from the low 40s to the low 60s.  And sandwiched in the middle are 3 20d models – the designation Jaguar uses for their diesels.  Above Premium and Prestige, this is the R-Sport version with more assertive styling, LED headlights that swivel in the turns, fog lights, 20” wheels, 18-way sport seats and a variety of advanced safety features.  The F-PACE I first drove in 2016 is a model that’s been replaced this year.  The 340 horsepower version of the 3.0-liter supercharged V6 has been swapped for a 2.0-liter turbo.  If you still want the V6, it’s now only available on the top trim F-PACE S where it produces 380 horsepower.  But back to this diesel.  The heavier fuel with its higher energy density clearly returns the best mileage – rated at 29mpg in combined driving – an over 20% improvement from the gasoline turbo.  It provides a greater driving range of over 460 miles and will save the average driver $2,250 in fuel costs over a 5-year period.  Choosing the diesel adds $1,500 to the cost of the car.  Bottom line – it’s the torquiest, most fuel efficient 4-cylinder engine the F-PACE offers but its financial benefits – particularly to a wealthier Jaguar owner – are fairly minimal.  In order to help shoppers choose, Jaguar suggests the diesel option for high-mileage drivers who spend most of their time on the highway where this F-PACE returns 33mpg.  Towing is rated at just under 5,300 pounds.

317 pound-feet of torque and over 30mpg are certainly big pluses but at what cost?  Unlike the 6-cylinder diesels I’ve driven in the Land Rovers, this 4-cylinder unit makes itself known.  It’s kind of loud, it vibrates through the cabin and it’s a little slow – not a single attribute I desire in a Jaguar.  Now on the positive side, this F-PACE still knows how to handle a backroad.  Push it hard and it will reward you.

When you first step off, the diesel shows its cat-like quickness and when the 8-speed transmission is in Sport mode, its midrange punch is powerful. That being said, it turns in a 0-to-6-mph of 8.2 seconds.  The next slowest model takes 6.4.  But for me, I love Jag’s supercharged engines and if I was fortunate enough to be in a position to buy one, this diesel simply wouldn’t make the cut.

This R-Sport starts in the mid-50s and is optioned up here to $64,725. Just like in my first F-PACE test drive, I missed having the Adaptive Dynamics Package a $1,000 option that adds electronically controlled dampers because the ride here is unnecessarily firm.  I’m also less than enthralled with the cabin makeup that seems to be short on luxury touch and appearance despite its fairly generous content level.  And having that full size spare?  Talk about an awkward cargo floor.  And my other big knock continues to be the infotainment system that soldiers on eschewing true smartphone projection.  It’s a clumsy unit that doesn’t quite get it right.

Its looks are universally beloved. The starting price makes owning a Jaguar SUV fairly accessible.  And it certainly welcomes a spirited drive.  But this diesel F-PACE is a pass and in general I’ve never been as enamored with this model as I imagined I’d be.