Since 1997 American Expedition Vehicles has been producing aftermarket parts and accessories for serious off-road driving. And since last year Chevy has been making a go anywhere version of the Colorado known as the ZR2.  So the marriage was a no-brainer.  The result: the 2019 Bison – a Colorado ZR2 with even more capability afforded by the integration of several key AEV components.  For maximum protection while driving over rocky, jagged terrain, Bison features five skid plates covering the engine oil pan, fuel tank, transfer case and front and rear locking differentials. Designed by AEV, these skid plates are constructed of hot-stamped Boron steel. 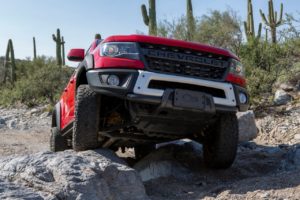 Customers will also be able to purchase an available third-party accessory snorkel for the ZR2 Bison from AEV, ideal for air filtration while driving on dusty trails.