The all-new F-150 is finally here and though it doesn’t look radically different there are a number of innovations Ford is debuting on their most important model making it smarter, more efficient and electric quick. 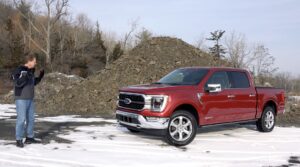 I haven’t tested a hybrid pickup since the 2009 Chevy Silverado.  So what Ford is doing here with this new PowerBoost option isn’t revolutionary but it does result in a phenomenal truck that, at least on paper, is 50% more fuel efficient in around the town driving and a monster torque producer, meaning you get to have fast and frugal in the same package. 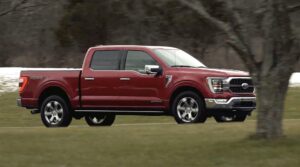 This F-150 is a full hybrid that adds a 47 horsepower electric motor to the twin-turbo V6 via a 10-speed automatic helping generate 570 pound-feet of low-hitting torque so acceleration is immediate and very impressive.  The lithium-ion battery located below the rear floor makes this the heaviest F-150 configuration but there’s so much power on tap you’d never know it. 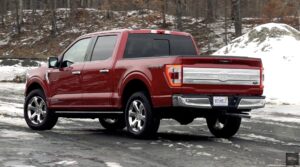 Consequently, PowerBoost does lower the truck’s maximum payload capability by as much as 840 pounds but for conventional towing, this 4X4 Supercrew can still handle 12,400 pounds when equipped with the Max Trailer Tow Package which is more than sufficient in the half-ton segment. 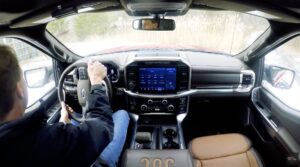 The gas-electric hybrid is one of 3 optional V6 powertrains you can choose for this specific truck if, for whatever reason, the standard 5.0 just isn’t for you.  For an extra $2,500, it provides the best combined fuel economy rating of the bunch rated at 24mpg regardless if you drive mostly in the city or on the highway. 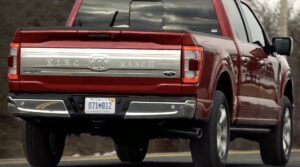 Now, like all hybrids there are moments where propulsion is less than perfectly smooth as the gas and electric transitions take place but it’s pretty darn good and the torquey gusto you get from the electric makes this truck sneaky quick.  And it’s also very quiet. 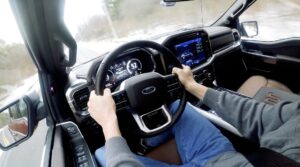 What I’m driving here is the King Ranch model – a luxurious truck born out of Ford’s licensing agreement with the pioneering King Ranch in Texas – a partnership that’s lasted over 20 years. 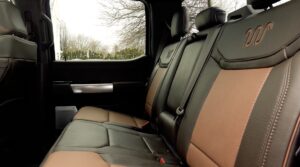 So among all of these Running W’s owners get a taste of The Lone Star State through the unique appearance of the rich, Java Leather seats with matching carpeting. 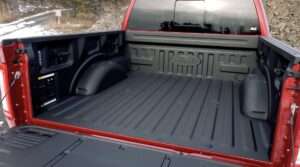 Normally, this truck would also have a Stone Gray secondary color running around the bottom but this Rapid Red example continues this beautiful paint choice all the way through. 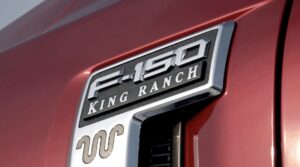 Base price of this King Ranch is about $60,000 but when lavishly equipped get ready for some serious sticker shock. 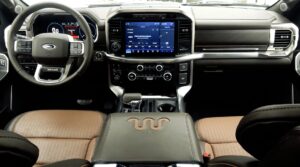 If you can afford a $76,000 ½-ton pickup, then you likely have expectations for your truck that go beyond work.  And this loaded King Ranch trim is impressive in its offerings. 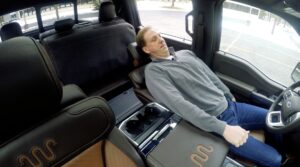 From the faster SYNC4 system with its huge screen and wireless phone projection to massaging seats, this really has everything you could want and then some in terms of creature comforts not to mention the smart stuff like the sleeper seats and center work surface.

Of course you’ve also got trailer backup assist, numerous drive modes and very cool exterior lighting options.  Add to that that the hybrid is essentially a rolling generator capable of powering all kinds of big stuff and this F-150 is truly as smart and as innovative as they come.

It’s called Pro Power Onboard and it’s an option on EcoBoost and V8-powered F-150s but if you get this PowerBoost engine it takes it to the next level with 7.2 kilowatts of available power via 5 outlets in the bed, one of which is a 240 volt.  On a full tank of gas, this truck can simultaneously power tools, lights, compressors – you name it, for up to 32 hours.  That’s an amazing feature any truck owner would love to have.  It’s a $750 option. 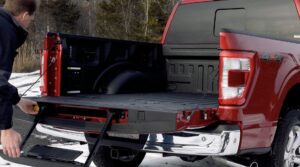 And the power operated tailgate has some tricks of its own with integrated rulers, mobile device holder and of course the step up into the bed. 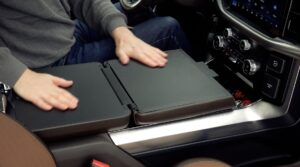 Move inside and imagine your lunchbreak like this: a center console that converts into a wide, flat work or eating surface, the 18-speaker B&O Sound System with headrest speakers enveloping you in sports talk that’s streaming wirelessly from your phone and afterwards recline in the heated and cooled sleeper seat while getting a recovery massage. 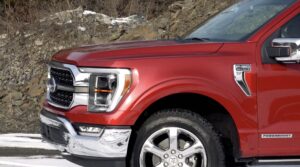 And to think that there are 2 trim levels above this one!  And when you buy an F-150 now you can opt for the $995 Co-Pilot360 Prep Package; that’ll give you access to an over the air update scheduled for later this year that’ll bring some real hands-free driving to your truck.

Other very cool features include zone lighting which allows you to direct all of the exterior LEDs as needed, Pro Trailer Backup Assist – which has a lengthy initial setup process for your particular trailer but then allows you to use this dial to easily reverse it, and the myriad drive modes that set you up for success no matter what kind of driving you’re doing.  I just wish they weren’t sequentially chosen becauseit takes some time and memory to get to where you want and why did Ford put the Tow/Haul setting between Normal and Eco and Sport settings? 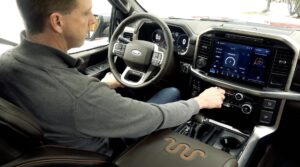 The graphics look great, though.  I also like being able to watch the Hybrid’s power flow over here…but unless I missed it, a pure EV mode is not part of the package.  Nevertheless, the F-150 does its fair share of just that.  Now, have I gotten 24mpg?  No.  Not even close.  And we know that an up to 34% reduction in fuel economy affects hybrids in cold weather like this and have I been using the remote start almost every day?  Yes.  So I’ve had to settle for about 17mpg instead. 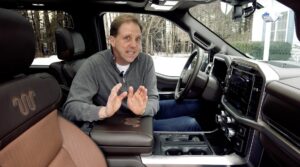 Planning on making this a family vehicle?  The rear seats are huge and when not used for people you can get this partitioned storage area which is also lockable.  As tested, the price is $76,110 which at first seems almost absurd but then when you start to factor in how great it drives and all of its capabilities and features, well, then it starts to make some sense.

I don’t love the King Ranch look but there are 11 different grille options depending on trim level so there’s likely at least a few that’ll appeal to you.  It doesn’t fit in my garage but if it did I’d love to have one.