When you fill your Wrangler cup all the way to the top this is what you drink; an Unlimited Rubicon with every option making it nearly as luxurious as it is capable. 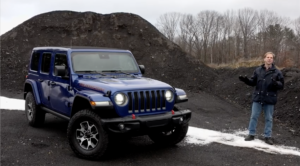 This is my first drive in one powered by a 2.0-liter turbo; one of three engine offerings for the 2020 model year. 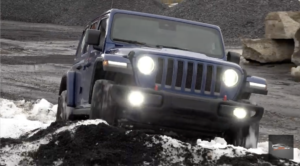 No motor is more ubiquitous in today’s vehicles than the 2.0-liter turbo-four.  With very few exceptions, these engines power at least one vehicle in every automaker’s lineup from Chevy to Porsche. 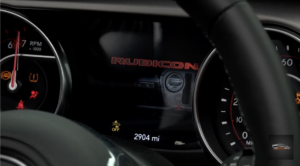 Offering power and torque levels on par with a small V6 but with better fuel economy, these boosted 4-cylinder engines started their reign of dominance about a decade ago during the lightweighting/gas crisis era. 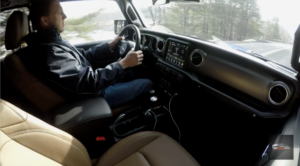 So when Jeep redesigned the Wrangler a couple of years ago one showed up on its options list. 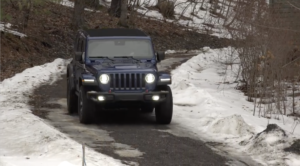 The Pentastar V6 is the standard engine but as long as you’re willing to forgo the manual transmission and part with the $1,750 that necessitates the 8-speed auto, the torquier turbo-4 is there to satisfy your racier side because it indeed offers a quickness the V6 and the sloth-like diesel can’t match. 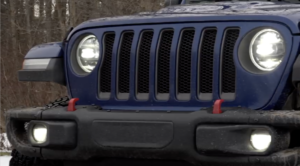 It’s rated at 270 horsepower and an impressive 295 pound-feet of torque peaking at 3,000 RPM.  So though the EPA says it bests the V6 by 3 mpg in city driving it’s all going to depend on how often you spool up that twin scroll turbo. 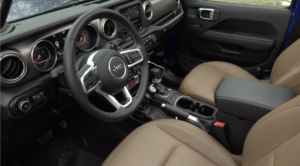 Power delivery is energetic but composed.  Just keep in mind that Jeep recommends 91 octane or higher for optimum fuel economy and performance. 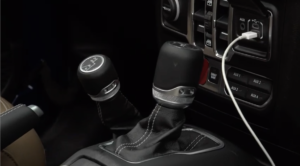 It’s capable of towing 3,500 pounds which is the same as any other 4-door Wrangler though I’m surprised to see its curb weight of 4,478 pounds is heavier than the V6. 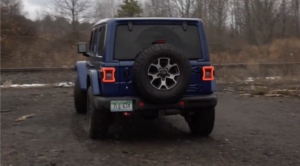 21mpg city/22mpg highway isn’t much of a spread but it only trails the EcoDiesel by 1mpg in around the town driving.  But man – it sounds gruff.  Smartly, the engine stop/start system can be defeated for off-roading. 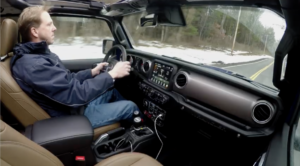 Though this engine is livelier and slightly more fuel efficient, at least on paper, I think it’s an odd fit in the Rubicon where owners are far more likely to do some serious off-roading where precision is often required. So a more linear power delivery is favored and that’s what the V6 gives you. It’s also not cheap to upgrade to the turbo though it’s not nearly as expensive as the optional diesel. It doesn’t sound appealing in any way, but it gives the Wrangler a jolt when you’re on the tarmac. 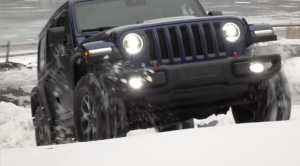 This JL Rubicon is similarly spec’d to first one I tested last year so my opinions haven’t changed – it possesses the expected level of off-road awesomeness bundled with an uncanny attention to cleverness and detail; a hallmark of many FCA vehicles.  Loaded up, MSRP is $59,605 but Jeep gives you just about everything at that price except power seats. 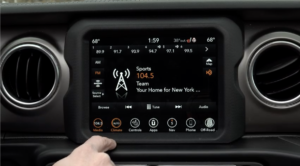 Did you ever thing you’d see a Rubicon with adaptive cruise control, auto high beams, heated seats and steering wheel and super slick infotainment with Off-Road pages?  Of course you didn’t.  The brown leather is not attractive in any way and without sidesteps it’s a long way up but this is the smartest, friendliest Rubicon ever.  But as I always say; if you’re never going to pull the 4-wheel drive lever and get this thing really muddy then save yourself some coin and get a Sahara – plus it’ll drive better on-road whereas this one requires constant steering correction. 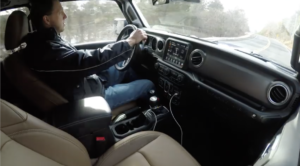 Jeep offers a wide variety of roof options with the new Wrangler but this one is the most impressive as well as the most expensive. It’s called the Sky One Touch power top and it turns your wrangler into a convertible with the utmost ease at an added cost of nearly $4k.

This is neat and still allows for the rear quarter windows to be removed and stowed in the provided bag.  I’d take it for the convenience factor alone because removing the hard top is 2 person work that requires some planning.

Base price is about $44,000 but this one has it all.  And it’s as fun to drive through the snow and mud as ever with a new turbo option that’s likely best suited for the Wrangler Sport .