Macan, Macan S, Macan GTS, Macan Turbo, and Macan Turbo with Performance Package; that’s the lineage of Porsche’s hottest-selling, small SUV and once you reach this level you’d better have 2 things: a passion for velocity and a really fat wallet. 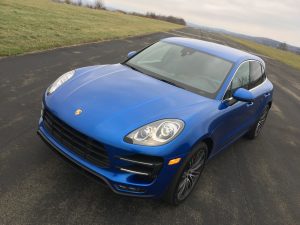 Want a new Porsche for less than 50 grand? Look no further than the Macan because it’s the only choice.  Every month, Porsche sells more Macans than all of their cars combined.

Launched 3 years ago, it has been a boon for the German automaker.  All but the base model run with a twin-turbo V6 but it’s the top 2 trims designated as Turbo that get the largest, most powerful engines; a 3.6-liter motor producing no less than 400 horsepower.  And new for this year is the Macan Turbo with Performance Package, the new range topper delivering 440 horsepower.  Maximum torque has also been ratcheted-up to 442 pound-feet.  Larger brakes and a sportier suspension calibration round out the other key ingredients.  Of course, it competes with more luxurious offerings in the ever-growing, small sport utility segment but for some perspective the Macan possesses a footprint roughly that of a CR-V or Rogue but with cargo space more on par with smaller offerings like the HR-V and Rogue Sport.  It’s an incredibly sporty take on the most popular vehicle style going and it’s eager to change your opinion of what a small sport-ute can be.  Of course it’s quick; hitting 60mph in only 4.2 seconds via launch control, that’s 2/10th’s faster than the regular Macan Turbo.  Taking advantage of its wider rear summer-use Continentals, it also has a raised top track speed of 169mph.

The Macan has the stature of a real SUV so you sit up reasonably high reminding you that this isn’t one of the brand’s sports cars. Despite its magnificent power and handling prowess I like that its driving persona is distinguishable. There’s more body movement, the ride quality is exceptionally compliant and yet it’ll do things you thought were only possible in a sports car. It is more brawn than it is precise. It’s not as superglued to the road as one of their cars but it’s every bit as fun – just in an SUV kind of way. And, the engine and its sounds? Just wow.

Even with the lowered sport chassis atop these optional 21” 911 Turbo wheels, the ride is impeccably smooth thanks to the active air suspension. It’s not until you utilize the most aggressive Sport Plus setting that this Macan gets pretty edgy.  Much like in the previous Panamera, the swath of switches flanking the shifter give the driver a plethora of controls.  There’s even an Off-Road setting that jacks up the body and locks the torque split 50/50.  So even though this trim isn’t an obvious choice for your off-road adventures, the extra 1.5” of lift and capable all-wheel drive system equip it with the right tools.  Back on the tarmac, the optional Torque Vectoring Plus further enhances the driving dynamics and stability by varying the power distribution to the rear wheels providing more direct steering action.  It’s truly fun-to-drive with a perfectly executed 7-speed dual clutch transmission with paddle shifters and a sport exhaust system that opens up at the push of a button to treat the ears to a more resonant sound.  Mileage doesn’t change with the Performance Package, rated at a respectable 19mpg in combined driving.

There are a lot of special things about the Macan Turbo but the cabin really isn’t one of them. It’s Ok but not really what I’d expect to see in a nearly $100k SUV.

I’ve heard all of the excuses, but I don’t care; Porsche Entry & Drive has got to be standard at this level. Having to use the key and fob is embarrassing.  The 18-way adaptive sport seats hug your body reassuringly and with comfort, the VW infotainment system with Apple CarPlay is simple but likable, and items like heated and cooled seats, a heated steering wheel and 14-speaker Bose Surround Sound System are highlights.

There is analog temperature control, 2 USB ports and manual suns shades, but no heated seats and the rear legroom is pretty tight.

This Sapphire Blue example is a beauty which turned heads all week and if really fast SUVs are your thing, Porsche has crafted one that’s more than just about the engine. $88,750 will score you a Macan Turbo with Performance Package without any options but this one here sits at $98,000 and still doesn’t include a pantry of items you’d expect to find, particularly on the driver assistive front.  But exclusivity comes with a price and this one should remain pretty rare.