I’m not big into concept cars. Why? Because, on the rare occasion that they make it into production the result is typically very disappointing. Which makes this all-new Lexus LC even more impressive…it brings true concept car style to the streets with a roaring V8 soundtrack. 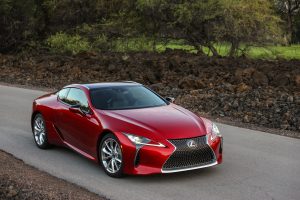 From the stunning LF-LC concept to the production 2018 LC Coupe in less than 5 years, Lexus is on the halo car fast track. With the ultra-expensive LFA supercar now in retirement, the LC becomes the brand’s flagship coupe, still aspirational but priced to be more financially attainable with a starting price of about $93,000.  The LC is a performance coupe ; a grand tourer focused on the road, not the track which isn’t to say you won’t have a ton of fun behind the wheel, because you will.

Once its intrinsic beauty settles in it’s time to drive. The cockpit is helmed from this hugging sport seat providing a wonderful driving position and the heads up display allows you to focus on the road. The high reviving V8 produces American muscle-like sounds that are as surprising as they are intoxicating. It’s been cold this week so the back end has felt particularly playful yet controllable on these summer-use tires. And the 10-speed direct shift transmission is lightning fast and makes the drive all that more fun. Just as you would expect from Lexus it’s a sports car that always remembers its family’s ethos.

That sound, though! The standard Active Exhaust really blossoms in Sport S and Sport S + modes extracting every last ounce of eagerness from the 5.0 and newly developed automatic transmission with its high-performance torque converter and dual-clutch-like shifts.  It doesn’t lock-up when starting off so shifting from reverse to drive takes an uncomfortably long amount of time, such as in backing out of a parking space.  Thereafter, it’s a masterpiece of smartness and efficiency that encourages using the magnesium paddle shifters.  During acceleration, a Sound Generator enhances the exhaust note inside the cabin but even from the street, the LC sounds completely badass.  The motor is derived from the V8 found in the RC F and GS F, producing 471 horsepower and 398 pound-feet of torque.  Tuned for a high 7,300 RPM redline, it’s not a stunner off the line but its 0-to-60mph time of less than 4 ½ seconds still moves you and in the midrange it feels exceptionally responsive.  This is a fully modernized engine, capable of raw power and 26mpg highway.  But how does it handle?  I have to reserve full commentary here due to the fact that these optional 21” Piot Super Sport run flats are not cut out for the unseasonably cold weather encountered this week.  As such, I found the LC to be a bit unpredictable at times, oscillating from modest understeer to a touch of oversteer when driving a curvy road.  The optional limited slip differential quickly gets you back on track, though.  I imagine that on a warm road the LC would have that easy-to-drive, glued to the road sensation one would expect from a Lexus GT.  It weighs in at 4,280 pounds with a nicely balanced 52% of that over the front wheels.  I can say this however; it is noticeably above Lexus quiet decibel levels but the ride quality is still very much refined using an adaptive variable suspension.  The body feels astoundingly rigid…so tight that you can hear the optional glass roof creak when the car is experiencing twist.  The steering feel is very natural, the brakes stop with an organic assuredness and there’s an overall rhythmic harmony to the LC’s drive that just feels right.

You sit low so getting in and out isn’t the easiest, but the optional sport seat positioning is perfectly focused for driving and deeply comforting for your back. And the cockpit appears as elegant as the exterior, continuing the concept car style in a breathtaking way.  The red leather and Alcantara are so sexy and the comfort level is high.  Of course, that excludes the rear seats which are for show only.  Check out these cool gauges and their mechanical movement.  All the touchpoints have a soft, luxurious feel and the innovative placement of some of the controls is brilliant.  But Lexus Enform isn’t one of them.  I was hoping for a miracle here but alas the LC gets this clunky system that is the posterchild for distracted driving.  Sure, it looks really cool but getting around and finding what you need is tedious and downright dangerous while driving.  This is the LC’s wart.  At least the optional 13-speaker Mark Levinson surround sound system is brilliant. 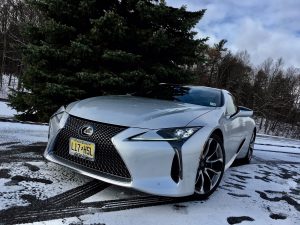 My LC 500 tester checks in at $100,920, a price that’ll put far more of these on the street than the ultra-rare LFA. It has supercar status without the stratospheric price tag…a grand tourer with stunning style.  Built in the same factory that produced the LFA, the LC is also available as a Hybrid and should spawn an F variant and possibly a convertible over its lifespan.