Nissan has hit the jackpot with the Rogue. It’s knocked the Altima from the brand’s top spot and isn’t looking back. So if you’re Nissan, what do you do? You make a Rogue Sport of course; a smaller, fun-to-drive version that’s perfect for a younger audience. 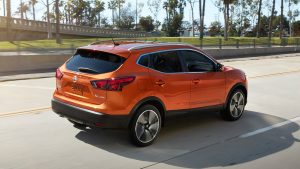 Known as the Qashqai in overseas markets, Nissan smartly changed the name here to capitalize on the insanely popular Rogue.

It also shares the Rogue’s global, unibody front-drive platform and regardless of its less expensive pricing, the Rogue Sport also cribs most of its bigger brother’s advanced safety features.  While the Rogue supports an optional 3rd row of seating and is sized for family duty, the Rogue Sport is over a foot shorter.  Nissan believes this is the one that’ll bring new customers to the brand; young, city couples who love the Rogue’s look but needn’t nor want its additional size.  Easier to turn and park in tight spots, the Sport has its urban advantages though gas mileage isn’t one of them.  Despite its smaller 2.0-liter engine, the Sport checks in with the same 27mpg in combined driving as the Rogue.  Unlike its European counterpart, there are no diesels or manual transmissions here.  The 141 horsepower 4-cylinder is mated to a continuously variable transmission Nissan calls Xtronic.  There’s not an overwhelming amount of engine here but in its native stop-and-go environment, the Sport feels amply powered.  The CVT isn’t quite to Subaru’s benchmark standard but it’s mostly inoffensive.  The best part of the drive is the Sport’s responsive steering and nimble handling.  Running errands and dashing through the city is the Sport’s forte.  Get it out on the open road and its less distinguished though still pleasant to drive.  Though there’s no Sport mode for the engine or paddle shifters for the gears, there is a Sport mode for the steering, providing greater feedback and firmness.  The one thing that doesn’t need more feel is the fully independent suspension.  Riding on these 19” eco-friendly Bridgestones with a narrow sidewall, the Sport is constantly transmitting the road to the driver.  Some like that, but on pothole- and manhole cover-riddled city streets, it doesn’t seem to make much sense.

It turns out The Rogue Sport is the perfect addition to Nissan’s SUV lineup. It’s extremely likable, from the ultra-comfortable driver’s seat to its frisky maneuvers it’s the kind of vehicle owners are going to fall in love with. Sized right, priced right and styled right, Nissan has the formula down. Plus, this SL trim is loaded. Now, for an urban vehicle they could have made the ride softer and the CVT, is well, a CVT.

You can grab a base front-drive Rogue Sport S for $22,395 – $3,000 less than a Rogue – or go all in on an SL AWD like this one here with a starting price of$28,395. Mine goes even further with the only 2 available packages, the Premium and the Platinum for a total MSRP of $31,245.  It’s surprisingly well-appointed with full-on safety and convenience features and blends a premium feeling with cabin quietness.  Moonroof, real leather, super-fast heated seats, heated steering wheel, remote start, navigation, mobile apps and services, around view monitor –the Sport is giving you a solid bang for the buck. Plus, it’s got all of the key safety features of Nissan’s Safety Shield, including intelligent cruise control, auto high beams, blind spot warning, forward emergency braking and more.  The 6-speaker sound system sounds great but there’s no HD radio.  There’s also LED front lighting minus the fogs, though an extra $190 to the dealer can score you those, as well.  Speaking of which, there are dozens of factory and dealer installed accessories for the Sport that allow you to customize.

What areas could use improvement? How about a height adjustment for the passenger’s seat, an upgrade to the latest version of NissanConnect with full smartphone integration, better placement of auxiliary buttons, and the addition of a power liftgate.  The rear seats don’t slide or recline and sit rather low though they do offer up ample leg and headroom.  In the back, there’s a cargo management system called Divide-N-Hide – I’m surprised Chrysler didn’t already trademark this – that even allows you to neatly stow the rear shelf.  With the seats folded, the Sport offers up luggage volume that’s greater than that of the Chevy Trax and a little less than the Honda HR-V.  But the Rogue Sport pushes the luxury level beyond those 2, allowing customers to get more of the full Rogue experience in a smaller package.  It’s very well done and should sell as well if not better than its bigger namesake.