There are a handful of expensive executive cars that offer performance variants that push the envelope of size and handling. But Porsche just rolls its eyes and laughs. Though it lacks the sheer size of its big sedan counterparts, the Panamera takes the driving aspect to an entirely different level.

By the time it was introduced in 2009, unprogressive Porsche loyalists had already survived the brand’s foray into SUVs, so a 4-door sports car was greeted with a mere shrug of the shoulders. It was a brilliant move by the German automaker, fleshing out a lineup that now includes a Porsche for nearly every need.  I’ve previously driven just about every Panamera variant and always walked away with admiration. 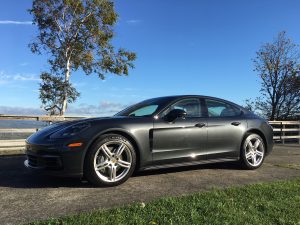 So here we are with the next generation – the 2017 Panamera.  Longer, wider, taller and with increased luggage volume, this 4-seat hatchback now assumes more of a 911-styled appearance with a fantastic reimaging of the rear.  Though Porsche still designates a stand-alone Turbo model with a V8, fact is all Panameras are turbo-powered now and this here is the mid level 4S with all-wheel drive and a new 2.9-liter twin-turbo V6.

Equipped with the variable sport exhaust system as part of the optional Sport Package, I’m amazed by how aggressive it can sound; with an accent more emblematic of ‘ciao’ than ‘guten tag.’  Its voice varies between the 4 selectable drive modes from a noticeable burble upon startup to a backfiring maniac when in Sport Plus.  Those modes can now be selected via a rotary switch on the steering wheel in addition to the menu on the touchscreen.  They manipulate a host of drivetrain and suspension components including the air suspension, torque vectoring and rear axle steering to create a driving experience perfectly appropriate to the situation.  Located in the center of the mode switch is the Sport Response Button.  Press it and get rewarded with the most outlandish 20 seconds the Panamera can deliver.  Within Sport Plus is also launch control – a foolproof way to snap your head back from 0-to-60mph in 4.0-seconds flat.  And yes, that’s faster than before with an increased top speed to 179 mph.  The V6 delivers a maximum 440 horsepower and 405 pound-feet of wide ranging torque while achieving better mileage, rated at 23mpg in combined driving.

I’ve been asked a number of times; “Is it worth $140,000?” And here’s the deal; cars of this ilk possess an incredible dynamic range. The Panamera stretches between luxury cruiser and sports car hero with varying degrees of intermediate styles, all done to impeccable precision. Whether you want a quiet commute or a hardcore backroad drive the Panamera’s going to deliver to the highest level. It’s amazing car that’ll leave you smitten.

It feels sizable from behind the wheel yet eminently controllable with a supple ride and rear-wheel-like handling characteristics in the higher settings. Its 911 genetics are palpable.  Porsche’s dual clutch automatic transmission nicknamed PDK, gains an extra cog.  This 8-speed gearbox is a fantastic, lighting-fast way to shift gears when driving for sport but here’s a warning; it’s the Panamera’s one whoops moment in congested city conditions.  Navigating stop and go traffic, the Panamera bucks and makes clunky sounds as the engine automatically starts and stops – certainly an embarrassing deficiency of the PDK.  But all else is sublime.

The Panamera sits low so getting in and out isn’t the most graceful move, but the cabin is uniquely awesome. The 4 buckets are perfectly matched to the car’s sporting desires, and though not ventilated, the front seats are heated and include a wonderful and quiet massage function.  Though Panamera Executive models offer an extra 6” of wheelbase and the new wagon-esque Panamera Sport Turismo comes standard with 5-passenger seating, this one is strictly meant for 4, at least for the time being.  The seats are power adjustable and offer ample legroom for adults but because they sit low passengers get a straight-on view of the front headrests.  Occupants also gain control of sunshades, climate control, and stereo functions while also being able to peak in on the navigation route.

The biggest evolution up front is the center stack, that used to contain a dizzying array of switchgear and now has been simplified in the form of touch controls, mostly as redundancy for the touchscreen. By midweek, I felt mostly up to speed with the functions and where to find them but continued to confuse the rotary screen controller for the awkwardly-placed volume wheel.  The big screen is mostly quick and fairly intuitive to use.  It includes Apple CarPlay and a big sounding, optional Bose Surround Sound System.  The around view monitor is a personal favorite while over in front of the driver is a configurable cluster with night vision assist with deer recognition and navigation mapping.  The heated steering wheel, composed of carbon fiber and leather-wrapped, feels wonderful in the hand.  The expected level of safety features is here too, though semi-autonomous functionality doesn’t stretch beyond the adaptive cruise control and lane keep assist so this is still a car that needs a full-time driver.  Accessing the voluminous cargo area can be accomplished hands-free and includes fold flat rear seats that take the car’s flexibility beyond a trunk-based sedan.

So is it attainable? Well, a base rear-wheel drive Panamera starts at $85,000, this 4S from $103,000 and optioned with almost all of the important enhancements like this one, you’re looking at $140,000.  It’s the perfect driver’s alternative in the uber sedan segment.