What began as the Pathfinder Armada over a dozen years ago has evolved into the all-new, 2nd generation 2017 Nissan Armada, leaving behind its Titan truck roots and taking on a very Infiniti-esque appearance. 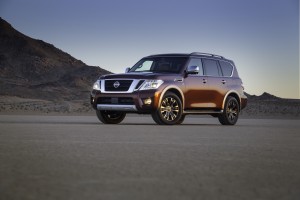 The Armada’s resemblance to its QX80 cousin is indisputable and that’s a good thing, giving Nissan SUV shoppers a taste of the Infiniti life.  It’s still built upon rugged body-on-frame construction but this one is stiffer, helping enhance handling and ride comfort.  It’s 1.2” longer but rides on a wheelbase that’s over 2” shorter, still capable of seating up to 8.  With an emphasis on quietness and quick interior cooling and heating, the new Armada uses acoustic glass in the front and sound absorption materials throughout in addition to 2nd row curtain vents to effectively distribute cool air to every seat.

Available in base SV, luxurious SL and range-topping Platinum trim in either 2- or 4-wheel drive, this Armada receives a completely reengineered powertrain with a direct-injected 5.6-liter V8, taking horsepower from 317 to 390 and torque from 385 to 401 pound-feet.  Also new is the 7-speed automatic replacing the previous 5-speed, helping improve fuel efficiency.

When properly equipped, this Armada can tow 8,500 pounds in all configurations.  Trickling down from the QX80 is a host of safety, security features and driving aids, utilizing an advanced radar system to introduce Predictive Forward Collision Warning that not only can sense the relative velocity and distance of a vehicle ahead, but also of a vehicle travelling in front of the preceding one.