What comes to mind when you hear the name Jaguar? The roar of the engine? Their Racing pedigree?  British luxury, perhaps?  Well, the car you once thought to be beyond your reach just became more attainable. This is the new entry-level model, the XE.

For $35,895 you too could own a 2017 Jaguar; a price point that makes the XE their most affordable model, by far. It’s a compact sedan, spec’d in rear- or all-wheel drive available with a host of 4- and 6-cylinder turbocharged and supercharged engines, all mated to an 8-speed automatic transmission. While some others are throwing in the towel on diesel, Jaguar’s all-in. The model you’re looking at here is the XE 20d AWD with the new 2.0-liter turbo-diesel. Designed and manufactured in-house, Jaguar markets it under the Ingenium name – their new modular design engine family offered in gasoline and diesel derivatives. This company loves their lightweight aluminum so in addition to using it in the body it’s also the metal of choice for the engine, meaning this guy weighs only 304 pounds. Allowing for higher compression ratios and possessing greater energy density, diesel fuel is synonymous with prodigious torque and excellent mileage. Here, it produces 318 pound-feet and, according to the EPA, nets 34mpg in combined driving, identical to the BMW 328d xDrive. But as is typical with the diesels I test-drive, my mileage far exceeds those estimates. I’ve averaged nearly 41mpg for the week. After a brief build-up of turbo pressure, this engine feels gutsy throughout its limited rev range, delivering that instantaneous surge of power we all love. From a standstill to 60mph this is the slowest XE, taking 7.5 seconds however it feels quicker in daily driving situations. Top speed is 120mph. Though it emits more greenhouse gases than the gas-powered XEs, it uses a refillable, urea-based diesel exhaust fluid to reduce nitrogen oxides. This scores the XE 20d SmartWay certification from the EPA as a very good environmental performer. It uses a somewhat rough engine stop/start feature and a sedative ECO driving mode to advance its efficiency goals. It beats the next most efficient XE by at least 10mpg and over 100 miles in driving range. But where does fuel efficiency rank in importance to Jaguar buyers and at what cost? While most diesels I test nowadays are so quiet you’d have difficulty even knowing – including some of the trucks – the XE chatters, clatters and makes other unappealing noises I want no part of in a Jaguar.

If you want an ultra-fuel efficient, small Jaguar that sounds like a truck, well here you go. But I don’t. There’s almost nothing about this car that exudes the brand’s ethos. Even in this Prestige trim it feels kind of cheap and the sounds it makes should never come from one of their cats. Luckily, there are plenty of other XE trims with gas engines from which to explore.

It weighs a relatively svelte and nearly perfectly balanced 3,560 pounds, possesses an excitable chassis, consistent and connected road feel through the electric power steering and a torque vectoring all-wheel drive system that sends all of the available power to the rear wheels during normal driving. I’m sure there’s a true sports sedan in here, but this diesel powertrain just isn’t doing it for me. 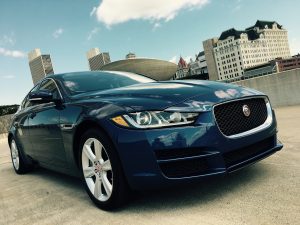 When I checked the tire pressure recommendations I was surprised to see them well into to the 40 psi range and that’s when I learned the XE has a light load and normal load setting. Dropping the pressure into the low 30s won’t net the best mileage but it will score you better ride quality.

The cabin is too noisy and black, shiny plastics are too prominent. An all-new infotainment system connects your phone through something called inControl Apps.  It’s supposed to be like CarPlay or Android Auto but just doesn’t live up to the offerings or ease of use of the others.  The voice commands are limited, it can be glitchy and sometimes slow to react.  It’s relatively easy to use, includes Wi-Fi, albeit with a slow 3G hotspot and has some cool features, like pinch zooming for the navi.  The optional Meridian 825 watt 17-speaker surround sound system is a force but has to work hard to overcome the extraneous road and engine noise.  The optional, super-bright heads-up display is a feature highlight.  The rear seats can accommodate 2 more with a rather pronounced drivetrain hump.  These are heated deep dish seats with above average adult dimensions.  They also splitfold from the trunk, where space is limited.  Loaded with the Vision, Comfort and Convenience and Technology packages, this XE has lots of goodies like heated and cooled front seats, a power rear window sunshade, and auto high beams.  But with an as-tested price of $57,645 the XE 20d AWD Prestige simply lacks that gotta’ have it factor…it seems more like an oddity than a serious competitor.