So you’re in the market for a full-size truck. You need something that’ll confidently haul the big stuff so you’re thinking diesel but the thoughts of venturing too deep into heavy duty territory are a turnoff to both your wallet and your peace of mind; after all they can be a handful for everyday duty.  Well Nissan believes it’s created the answer to your half-ton/heavy duty dilemma. This is the all-new, 2016 Titan XD. 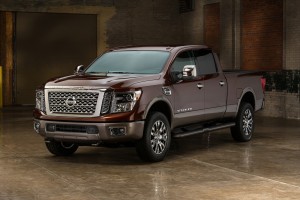 It’s hard to believe that it’s been a dozen years since Nissan tested the full-size truck waters with the original Titan. The road to this first complete redesign was a bumpy one, hindered by the recession and a cancelled tie-up with Chrysler. For Act II, Nissan is packing a bolder punch leading with the oversized Titan XD – a gas or diesel-powered solution they say bridges the cost and capability gap between traditional half-ton and full-size heavy-duty pickups. If this is more than you need, the 2017 model year brings a traditional half-ton Titan that is nearly 15” shorter.

Available exclusively in the Crew Cab bodystyle with a large back seat and a 6.5’ box, the XD can be specified in 2- or 4-wheel drive with either a gas V8 or like here, a 5.0-liter V8 Turbo Diesel sourced from Indiana-based Cummins. And it’s not an inexpensive option.  At $5,000, it boosts torque from 401 pound-feet to 555 at a much lower RPM and buys you an extra 1,000 pounds of towing capacity.  Its extra 700 pounds of curb weight will cost you about 500 pounds of payload, however.  Beyond providing more confident towing, Nissan says the diesel provides 20% better fuel economy than the gas engine while hauling full loads.  Though it’s exempt from EPA ratings, I averaged about 14mpg in city driving.  And because owners will most certainly be towing, there’s an integrated trailer brake controller, trailer sway control, a tow/haul mode for the 6-speed automatic transmission with downhill speed control and a trailer light check system that allows one-person hook-up operation.  Split towing mirrors that tilt down when in reverse would be even more helpful if they power retracted.  And the Around View Monitor with Trailer Guides and Moving Object Detection is a godsend in a truck of this size.

Capable of handling 2,000 pounds of payload and 12,000 pounds towing, the XD’s bed even has an integrated gooseneck hitch for 5th wheel duty.  Plus, the LED lighting, spray-on liner and adjustable tie down cleats bring added smartness to the bed.

There’s also a power sliding rear window and a damped, removable, electronic locking tailgate. The running boards extend far enough to help give you a leg up reaching into the bed but from behind the bumper is a tall step.

Nissan may market the Titan XD as a tweener but it feels like a big boy from the driver’s seat…wide, tall and long. The 5.0-liter’s performance is somewhat subdued, affected by a go pedal that takes some pushing before there’s a call to action and a transmission that’s in no hurry to kickdown. But once it all comes together the plentiful torque is satisfying.

For its durability and strength, a recirculating ball power steering system is used and feels surprisingly connected for a truck of this size. For times when you’re hauling nothing more than your family, the Titan XD is poised and quiet inside with big truck suspension movements that are soft but not overly jouncy. From the outside though, the sounds are clearly and proudly diesel derived.

This here is the model for the guy with deep pockets in the market for a luxe truck with serious guts. It’s the Platinum Reserve 4X4 with a couple of nominal options, totaling $61,795 whereas a 4X2 gas V8 starts at $36,485. Platinum Reserve is Nissan’s nomenclature for as far as you can go and as such this truck is loaded with premium leather, zero gravity, heated and cooled front seats, heated rear seats, remote start, a 12-speaker Rockford Fosgate premium audio system and Nissan Connect with Navigation. While it definitely feels like a well-appointed rig, some of the execution falls short of Platinum Reserve status, particularly the less than impressive infotainment system which just doesn’t stack-up. Converting rear seat space is clever however, with seats that tilt out of the way and shelves that create a flat surface.

Has Nissan carved a niche segment with the Titan XD Diesel or will truck buyers gravitate to tried and true products from Ford, GM and Ram?  Nissan calls the Titan an “Every Duty Truck” but I think it skews farther to the heavy duty side in terms of everyday drivability.  No longer just trying to hand with the cool kids, the Titan XD is now part of the group.

CLICK HERE to get a FREE ONLINE PRICE QUOTE for your next NEW CAR from a dealer near you. Absolutely NO OBLIGATION.