They’re often referred to as forbidden fruit, the coveted cars from Europe that for whatever reason don’t make it to our side of the pond. It’s a rare occasion that 1 sneaks across and when it does there’s reason to celebrate. This is the 350 horsepower all-wheel drive Ford Focus RS.

The run is almost over. 2018 will be the last for this current generation hot hatch which finally arrived in the U.S. last year. After SVT merged with Team RS in Europe in 2015, the Blue Oval’s low-volume, high-powered vehicles are branded under the Ford Performance name. 15 years ago there was an SVT Focus for us but this new German-built RS, last introduced in Europe in 2009, makes that car look like a toy.

The RS is EcoBoost powered via a 2.3-liter 4-cylinder fed by a twin-scroll turbocharger – the same motor found in the Mustang but even more rambunctious here making an audacious 350 pound-feet of torque starting at 2,000 RPM. A 6-speed manual is the sole gearbox which routes an average of 70% of the power to the rear wheels. And then there’s torque vectoring control which applies a small amount of brake force on the inner wheel at the front axle to limit spin and clutch packs at the rear to distribute torque from one side to the other. This significantly adds to the car’s exceptional grip and cornering capabilities. There are 4 driving modes with which to play including the first-ever Drift setting, allowing for the kind of oversteer-inducing fun typically excluded from cars like this. Though it’s pretty easy to get it around it’s not the same as having such shenanigans in say a V8 Mustang. It’s definitely a cool feature, though. And then there’s the driver-selectable suspension setting with a very aggressive Sport mode, accessed via an oddly placed button at the end of the left stalk. And last but not least, there’s launch control selected through the information display which revs the engine to 5,000 RPM before tearing through 60mph in 4.5 seconds. While passing another vehicle or launching from a standing start, an automatic overboost-on-demand feature provides additional torque delivery for up to 20 seconds. Brembo front brakes do their typical excellent job of stopping this 3,400 pound car with authority.

These downsized 18” rims fitted with Michelin Pilot Aplin PA4 winter tires are a highly recommended option for those who live in the snowbelt. But, it’s summertime here in the Northeast so I’m not sure why my car is still wearing them but because it is I feel like I’m only getting 80% of the true RS experience. 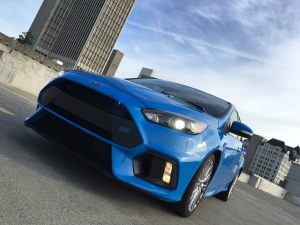 For $2,000, the RS Winter Wheel and Tire Package makes this Focus the first car in North America to offer this factory accessory option. But with temps in the 70s the original 19” Pilot Super Sport or optional Pilot Sport Cup 2 tires would make a world of difference.

Buckle into this super snug Recaro seat, grab the metallic shifter and engage the highly sprung clutch pedal and you instantly feel like you’re driving a rally car. The suspension setup ranges from taut to wow that’s firm, there’s quick but progressive thrust until an overboost mode sends you rocketing and the popping sounds from the exhaust are always amusing.  This is driving fun personified with a torque vectoring rear axle that really tucks the RS in through the turns. But about midway through the week these winter tires cried mercy and that’s when the glued to the road feeling turned to sloppy mush.

With a starting price of under $37,000, the Focus RS is a super-fun 5-door with plenty of practicality. It’ll accept 4 adults in comfort as long as you’ve got enough youth to get in and out of these high-bolstered Recaros, there’s some expandable cargo room, relatively quiet cabin, year-round traction and 22mpg in combined driving on recommended 93-octane for highest performance. One caveat to this all-wheel drive setup though is this car’s insanely large turning radius. The interior isn’t going to wow you with its modern high-quality feel, but it’s functional and ergonomically sound with SYNC3 and its embedded navigation and smartphone-connected apps like this one which allows you order Dominos from your car. It’s also interesting to note that though Android Auto is present, original Focus RS owners can upgrade to Apple CarPlay at a Ford dealer on their own dime…it costs about $200. All told, with the popular RS2 package, Nitrous Blue paint and winter wheels this RS stickers for $42,470. Ford is selling on average more than 500 of them per month in the U.S., most popular in California. 2018 models benefit from a new limited slip differential on the front axle.

This car is addictive – I found myself always looking for a reason to go for a drive. So if rally racing is in your blood, give this European-born Ford a test-drive.