The old Chrysler group is a special kind of crazy.  Whether it’s building cars specifically for the drag strip or fitting a family 3-row with a 710 horsepower V8, Dodge, Jeep and Ram do not follow industry norms, which is music to the ears of car lovers everywhere and it’s how we get to drive a truck like this; a 702-horsepower 1500 designed to eat the outdoors for lunch. 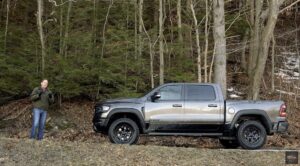 This is the new Ram TRX. 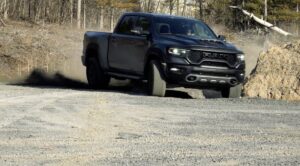 When your truck comes standard with Launch Control, 35” tires, nearly 12” of ground clearance and a feature called Jump Detection you just know insanity will ensue. 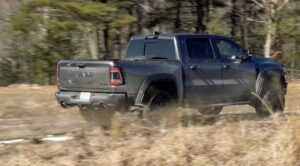 And that’s exactly what Ram delivers in this extreme version of an off-road truck.  Prior to its arrival, the Ford Raptor had a monopoly on this level of capability but at least for now, the TRX has bumped that bird from its perch.  This Ram is built upon a new frame that’s more durable than that of the standard 1500, retains the coil spring rear suspension but with performance upgrades, includes full floating axle shafts to resist bending, an axle hop damper to improve traction on rough surfaces, and new Bilstein adaptive dampers at all corners that can handle extreme compression events and high-speed harsh terrain. 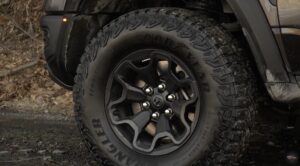 Wheel travel is greater than 13”, there’s a 2” lift overall and a garage-busting  8” of added body width.  Under the hood, a large plastic cover shrouds the 6.2-liter supercharged V8 with its massive air intakes, generating nearly 12 psi of boost to push output to 702 horsepower and 650 pound-feet of torque.  The intoxicating sounds from the twin-screw supercharger are about all you hear from inside the otherwise surprisingly quiet cabin but from outside, the exhaust emits a deep, menacing tone your neighbors are going to hate. 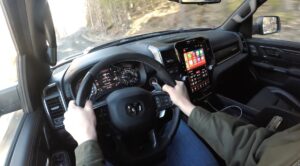 Push the launch control button and it is on; wheel spin is perfectly mitigated as this behemoth muscles its way to a sub 4-second 0-to-60mph time.  Ram claims 4.5 seconds but the performance pages have captured for me something that’s actually much quicker. 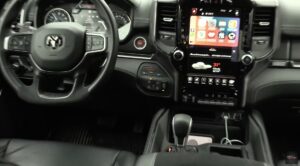 Top speed is listed at 118mph and though I haven’t gone anywhere near that fast I can say that driving at 60mph off-road is a special experience. These massive 325 wide tires slide around just a little as the TRX traverses rough roads with a floaty grace I can only assume you’d experience in a Stadium Super Truck.  Put it in the new Baja drive mode and as the driver you just make the steering corrections and let the suspension work its magic. 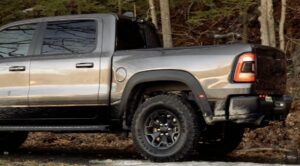 It’s ridiculously impressive and sounds amazing.  But up here in New York, off-roading is generally a slower, more technical pursuit, especially in winter, and the TRX is a master at that as well though its wide body makes some trails impassable.  Ram has given this truck all the proper tools you’d ever need and they’re integrated with a modern touch that makes the TRX even cooler. 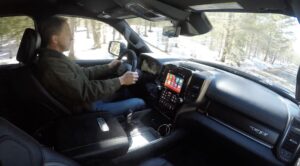 From the many drive modes detailed beautifully up here to the TRX and Performance Pages on the big screen, this is the most comprehensive package of gauges, hero measurements, and driver assist features you’ll find anywhere.  It’s all so brilliantly complete and exhaustive that it just adds to the feeling that there’s nothing this truck can’t do. 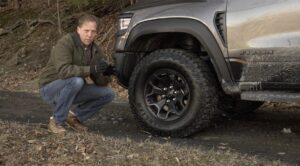 These 35” Goodyear tires have been specifically designed for the TRX and can be fitted on optional beadlock wheels for times when you want to release some pressure.  They are massive and you’ll find 2 more of them stashed away with one under the body and another in the bed…just in case.

They’re the Wrangler Territory All-Terrain and what makes them so impressive is that they kill it out here but are also shockingly quiet on-road.  That’s a combo you don’t normally get.  And if you’re curious, they sell for $270/per on Tire Rack. 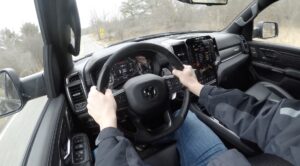 Speaking of on-road, the TRX is very easy to drive, though as you would expect with these types of tires, off-road tuned suspension and higher center of gravity the steering needs frequent little corrections, the body undulates as if you were floating on the ocean and you’ve got to slow down a bit heading into curves…it weighs over 6,300 pounds.   Still, it’s a truck you could happily live with every day – it’s supremely comfortable and unfathomably quiet and handles much better than a rig like this should.  There’s even a Sport mode that kills traction control and keeps that delightful whine in the on position.  Thinking back to the last Raptor I tested I would say this: the TRX feels even more invincible off-road while the Ford drives with a bit more refinement on-road.  And of course here you have all of that wild power and sound and a much richer cabin. 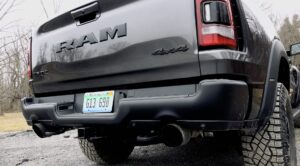 If I could have ANY truck I’ve ever tested over the past 23 years – and I’ve driven all of them – this would be it, hands-down.  What RAM has done with the standard issue 1500 is already very impressive but this?  This is nuts.  The TRX is massive, looks completely apocalyptic, chews up the earth and spits it out without breaking a sweat, runs with an insanely powerful engine whose supercharger sounds just as insane, and yet possesses the most advanced, luxury and tech laden cabin in the truck segment. 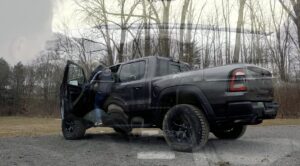 This is supremely modern and beyond spacious; the very epitome of having your cake and eating it too.  Yes, the gas mileage is atrocious and at over $87,000 it’s basically relegated to rich guy fodder but this is the AMG S-Class of trucks, holding nothing back. 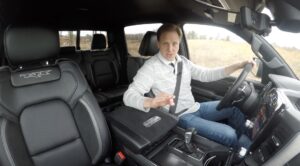 Though the base price is $70,000, this one is loaded to the hilt with literally everything anyone could ever want in a pickup.  From towing to safety to bed utility to audio and connectivity plus all of the creature comforts – Ram has emptied the cupboards and it’s all integrated so beautifully.  The carbon fiber, the 19 speaker sound system, the cool plaque on the center console lid – the only thing that’s not here is wireless phone projection.  But this screen is so big and full of awesome features that I can almost forgive the omission.  The surround view camera and power folding mirrors make parking easier than you’d imagine, there’s a head-up display, heated everything, remote start, adaptive cruise…you name it.  But if you’re a paddle shift fan these have a break in them to allow for access to the behind the wheel stereo controls which can be a little weird but this 8-speed is as smart as they come so no worries there. 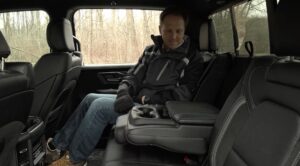 And in the back, space is enormous, there’re separate climate controls, heated seats and even a fold down arm rest.  The seats also fold up for additional storage. 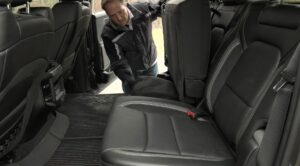 With rock rails, the bed mounted tire carrier, 2-tone paint, and the aforementioned goodies the price of this one rises to $87,870.  And I’ve averaged only about 10mpg – it’s rated at 12 in combined driving and it prefers premium. 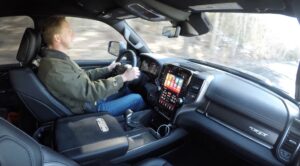 What can I say?  I’m hooked.  I love trucks and though it’s too long to fit in my garage if I hit the lottery this one is mine.