Nissan has a history of producing quirky little runabouts such as the Cube and Juke; beaming with their own unique personality, you can’t help but smile when you see one on the road. So what’s next?  Well, this is.  It’s called the Kicks but this time around Nissan isn’t playing it nearly as daring.  This guy is actually pretty mainstream. 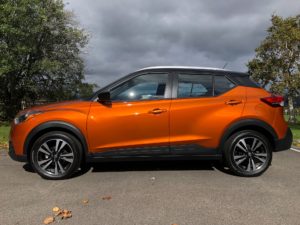 Nissan has a new entry point into their crossover and SUV lineup. With a starting MSRP of less than $19,000 the front-drive-only Kicks is a raised up 5-door hatchback.  Think of it as a Versa Note crossover.  They share a powertrain and a similar wheelbase.  The biggest difference is that the Kicks provides more cargo room – and of course ground clearance – while the Versa Note favors rear seat legroom.  It should also be noted that he Note starts at $16,500.

So I was excited about this going in. It looks pretty cool in the TV spots and the proliferation of color contrasting roofs continue – a $545 option that I really dig.  The Monarch Orange paint really pops and the 17” alloys provide a fitting stance.  But the Juke possessed cutting edge design, an available 215 horsepower engine and a manual transmission.  The Kicks offers none of that and that’s where the disappointment begins.  The next wet blanket comes after you land in the driver’s seat.  A gutless 1.6-liter engine tuned for the Kicks heavier body is mated exclusively to a Nissan staple – a continuously variable transmission.  No turbo, no drive modes, no paddle shifters…just a fun-sapping driving experience that’s designed with one thing in mind – MPGs.  It garnishes a 33mpg combined rating which is considerably better than the Juke’s.

The 125 horsepower engine, CVT and nondescript steering presents the Kicks as merely an appliance. Though not quite as cheap nor fuel efficient, the Ford EcoSport I recently tested is a much more satisfying experience.

The Kicks comes in 3 flavors. This is the mid-trim Kicks SV with a sticker price of $21,425 and everything you see here minus the black roof is standard.  The content level is notable – Touchscreen navigation with CarPlay and Android Auto, blind spot warning, rear cross traffic alert, automatic emergency braking, backup cam, auto climate control, and remote start.  The fabric seats are comfy and include a cool design and the touchpoints speak to a quality level that exceeds the Kicks’ price tag.

Geared towards singles and couples living in the city and on a budget, the Kicks shrunken size, small turning radius, 7” of ground clearance and 33mpg play to the urban commuter. But unlike the Juke, the Kicks lacks nearly any endearing personality traits.  Other than the catchy 2-tone paint job, it’s rather boring.  It’s not much to look at and the drive is completely uninspired.  Its mileage and low sticker price are its best selling points.

It’s quiet enough inside, the ride quality is sufficiently forgiving and the voluminous cargo room is attractive. But for me, I’m punting on the Kicks.