The hits just keep on coming for Honda’s crossover and SUV entries and this updated 2019 Pilot is leading the way. 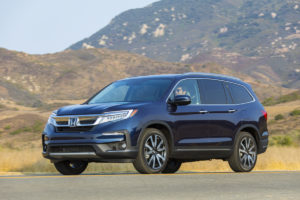 The styling has been tightened up, the powertrain has been refined, standard safety features have been expanded and the tech has been modernized. With a starting MSRP of $32,445 including destination, the 2019 Pilot is offered in 5 trim levels with or without all-wheel drive.

The 280 horsepower 3.5-liter V6 is standard across the board and is paired to a 6-speed automatic transmission on all but the top 2 models.  The Pilot Touring and Elite trims utilize a reprogrammed 9-speed automatic which addresses my previous concern, delivering smoother shifts.

The engine auto stop/start feature has also been tweaked for a more harmonious transition and for smoother integration with the air conditioning system.  Seven- and 8-passenger seating is available but new for 2019, the second-row captain’s chairs are now available on both Touring and Elite models.  A hands-free power tailgate is available for the first time on Touring and Elite grades. With the remote key fob in their pocket or handbag, the driver simply kicks their foot under a designated area of the rear bumper.

An all-new available Display Audio system is easier to use, with customizable shortcuts and simplified menus; A redesigned instrument cluster features a new, larger screen with a variety of user-selectable displays; Rear seat occupants benefit from an available updated Rear Entertainment System (RES) with a larger screen and new capabilities; and Pilot is also now available with a 4G LTE-based Wi-Fi hotspot. Available for the first time in Pilot is wireless smartphone charging.

Large enough for even plus-size smartphones, it’s standard on Elite models and available as a dealer-installed accessory on EX, EX-L and Touring trims.  And lastly, CabinTalk™makes its Pilot debut and is included on EX-L models with navigation and rear-seat entertainment, Touring and Elite trims. Using the HandsFreeLink® microphone, it allows those in the front row to easily communicate to those in the second and third rows using the rear speakers, wireless headphones, or both.