So you’re thinking about a compact crossover but you’re also thinking diesel. Well, the all-new GMC Terrain is offering just that. 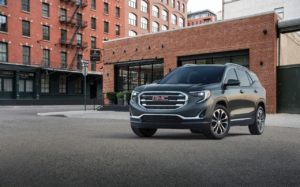 The Terrain has been a huge hit for GMC since it debuted in 2009 and now, almost a decade later; it’s been reborn as a smaller version of itself. Much like the Acadia before it, GMC has downsized the Terrain to better slot it against other small SUVs like the VW Tiguan and Mazda CX-5 instead of bigger ones like the Ford Edge and Nissan Murano.  Over 3” shorter and about 200 pounds lighter, this Terrain presents significantly reduced passenger volume and a little less cargo room.  Rear seat leg- and headroom is about the same even though the cool MultiFlex sliding rear seat is history.  This is new: a fold-flat front passenger seat for stowing longer items.

But what about a diesel engine? Fleshing out the trifecta of turbocharged 4-cylinder offerings is this 1.6-liter diesel – sourced from French automaker PSA and built in Opel’s Hungarian plant.  Paired with a 6-speed automatic transmission and available in front- or all-wheel drive, it produces 137 horsepower and – what diesel’s are renowned for – 240 pound-feet of low-end torque.  That means you get real-world oomph for your daily commute while also netting about 32mpg.  Less than impressed seeing as how a CR-V Turbo gets 29mpg which more than offsets the premium price of diesel fuel?  Well, keep in mind that high mileage drivers who are predominantly on the highway and rarely travel in the city will get an estimated 38mpg.  But if you’re a short journey kind of person who rarely drives on the highway then steer towards one of the gas engines.

So the question is: why the diesel? On the downside, its upfront costs adds about $3,000 to the base price, it’s not the torquiest of the 3 Terrain engine offerings either but it is the loudest and the heaviest, and it can’t tow as much as the 2.0-liter engine.  But perhaps you’re intrigued by its supposed bullet-proof reliability but more than likely it’s the 32 miles per gallon and 500 mile driving range.  And if you do a lot of highway driving, this motor stretches its mpg lead over the other engines by at least 10mpg.

Available in 2 trims and priced from around $35,000 I have the top-trim SLT Diesel which adds a hands-free liftgate, heated steering wheel, power passenger seat and memory settings. With all-wheel drive and 2 big packages focusing on infotainment and driver assist features, this one checks in at $39,510.  The Denali treatment is not available here.

And frankly, it hasn’t made much of an impression. The diesel is loud and a little rattle prone, the cabin looks less than premium grade and its driving dynamics are middling.  The ride quality is sufficiently supple, cargo versatility is notably smart, and the central touchscreen and its embedded wares are well done though a bit more rudimentary than the other GM systems I’m accustomed to.  The driver can choose between 2-wheel, 4-wheel auto and off-road mode with this dial which is a nice touch and the center console bin is rather large with more USB ports.  And even though it gets a lot of attention, the pushbutton transmission isn’t complicated and does free up space.  There are lots of goodies in here too, like the vibrating safety alert seat which pulses to warn of impending dangers, Teen Driver that allows owners to set parameters for their young driver, Tire Fill Alert that lets you know when you’ve achieved the correct pressure, heated leather seats, OnStar with a Wi-Fi hotspot and an upgraded 7-speaker Bose sound system with HD Radio. I find the seat bottoms too short but those with less height seem to like them.

GM is still bullish on diesels but this one – I just don’t see the appeal.