As Acura’s gateway car is prepared for its upcoming Civic duty, here’s one last look at the current generation ILX. 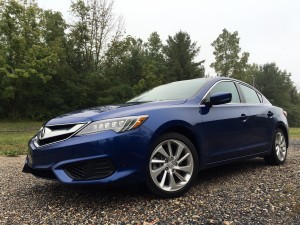 When Acura returned to the entry-level luxury segment in 2012 with the introduction of the Honda Civic-based ILX, they predicted they’d sell about 40,000 a year. Now, in what’s expected to be the ILX’s final model year before it transitions to the latest Civic platform, it’s likely to sell at less than half that rate in 2016.

The ILX received significant upgrades last year when I tested the new A-SPEC model – a series of modifications which took the car from stodgy to enticing. This time around I’m in the 2017 ILX with Technology Plus Package, one step below the highest trim A-SPEC, with an MSRP of $33,930 including destination. Everything here is standard equipment. No matter which ILX you choose, the powertrain is the same; a 2.4-liter 4-cylinder mated to the company’s unique 8-speed dual clutch automatic transmission with an added torque converter to improve smoothness. It runs on premium but returns notable real-world fuel economy of 29mpg in combined driving. The Tech Plus Package includes goodies the lesser trims don’t, such as voice recognition, the AcuraLink cloud-based connected car system, navigation, Real-Time Traffic with Rerouting, expanded music capabilities and further smartphone integration. Keep in mind; some AcuraLink features require a subscription.

The sharply creased front end and Jewel Eye LED headlights lead with a strong impression and in this Catalina Blue Pearl, the ILX strikes quite the pose. And as you would expect from Honda/Acura products, there’s an ergonomic easiness to this car which makes it very likeable. The leather trimmed driver’s seat and big-picture forward visibility just feels so comfortable. The infotainment is a bit dusty and clumsy to use but it’s ELS Studio 10-speaker premium audio system sounds pretty sweet. There’s 1 USB port in the center console and no wireless charging nor Apple CarPlay or Android Auto. Yet the quality and aesthetics of the cabin in general are strong.

The ILX will certainly benefit from the new Civic’s platform and powertrain options but as is, this one’s not too shabby. There’s a get in and drive connection you get with this car that’s endearing. It’s pretty fun to whip around and the ride has a level of softness baked in that keeps it Acura plush. But I miss the manual transmission and this car’s age is certainly showing.

The engine is spunky and the DCT is mostly transparent as an automatic transmission though dual clutch newbies will notice there’s something a little different. In Sport mode the sounds get a touch racy as the gears stay low and the revs get high but it doesn’t shift as quickly with the paddles in manual mode as compared with similar gearboxes.  So leaving it to shift for itself is just as rewarding.  For a front-wheel drive car with a propensity for understeer, it’s pretty engaging and rewards a good driver with a delightful level of ambitious handling and a comfort-tuned suspension.  It does make you yearn however, for an Acura with rear-wheel drive.  It’s not a fast car but its 201 horsepower and 180 pound feet of torque is balanced by its 25mpg city/35mpg highway rating.

The AcuraWatch Plus Package brings an amazing level of semi-autonomous safety features to the ILX including a Lane Keeping Assist System which keeps the car in its lane even if your hands are not on the wheel for a brief period of time. Adaptive Cruise, Collision Mitigation, Blind Spot Information, Rear Cross Traffic…it’s all here at a handsome price.

In a vacuum, the ILX makes a solid case for entry-level luxury car purchase, but the fact is that when the heralded next gen Honda Civic went on sale this car instantly became the red headed stepchild. Expected in calendar year 2017, a brand which struggles with its car lineup should finally have an ILX that’ll grab some attention.