Posted on January 17, 2023 by Car Critic Steve Hammes — No Comments

Outside of spotting an exotic supercar, the Escalade is the most ostentatious new vehicle on the road today.  Its gargantuan size dominated by an aggressive grille can’t be mistaken nor ignored.  See one coming and chances are you can construct an accurate portrayal of the driver – nouveau riche, flamboyant, politically pugnacious.  But what to do when another Escalade shows up in the presto community?  When simply keeping up with the Joneses isn’t cutting it you mock their bourgeois Escalade with a freshly minted Escalade-V, providing at least $40,000 worth of separation and a built-in V8 alarm clock.

SIZE AND POWER IN SPADES

Until now, Cadillac’s V-Series has always been reserved for its cars.  First and foremost, V represents power and lots of it but also, on newer models like the CT4-V and CT5-V, it also personifies track-capable handling.  Needless to say, this new Escalade-V is not cut out for Laguna Seca.  At 6,217 pounds no V-Series specific calibration exists that is going to turn this 18-foot-long 7-seater into a track hero.  So instead, Cadillac has focused on providing absurd amounts of power and an exhaust system that could wake the dead.  Bolting on the brand’s largest supercharger to the standard 6.2-liter V8 results in the kind of thrust that even Dodge’s Durango SRT Hellcat can’t match.  With 653 pound-feet of torque on tap the Escalade-V induces a rate of acceleration that seems insane for such a land yacht, so much so that it requires constant reminders that this isn’t a sport car. With this much fury in a luxury wrapper it’s easy to forget you’re essentially driving a very large truck, heavily relying on the exclusive six-piston Brembo front brakes for correction and a reality check.  That being said, the Escalade-V manages its weight surprisingly well, and with the recently introduced independent rear suspension, exhibits refined ride and handling characteristics far beyond previous models.  This 5th generation is clearly the Escalade’s most ambitious evolution and the best suited to wear the V moniker.

Other V-Series hardware includes Edge Red brake calipers, quad exhaust outlets, specifically tuned rear air springs and dampers and unique 22-inch wheels.  On the software side a selectable V-Mode triggers performance drive settings, lowers the body by 0.8-inches and opens up the exhaust valves for the most raucous Escalade experience ever.  Lighting its fuse via launch control is a sight to behold as the Escalade dramatically squats on its haunches, ripping its way to 60 MPH in under 4.4 seconds accompanied by a caustic exhaust note that cuts like a knife.  Not only is it a decibel devil but let off the throttle or downshift with the paddle shifters and this thing bangs out flatus like grandpa after Thanksgiving dinner.  Even at startup, the opening wail leaves no doubt as to whom on the cul-de-sac is leaving for work.  Good thing there’s a stealth setting for less conspicuous getaways.

FROM TOUR TO V THERE’S A MODE FOR YOU

Over on the curved, ultra-high-definition screen parameters such as suspension settings, steering and brake pedal feel, engine sound, all-wheel drive distribution and engine performance can all be customized.  In the relaxed Tour Mode, the Escalade-V is one of the quietest, most lavish SUVs ever created with supreme comfort throughout its three rows. Even in V-Mode with its senses on high alert this Escalade never crosses the line – Magnetic Ride Control makes certain of that.  A uniquely-tuned 10-speed automatic transmission and a full-time, variable torque-split all-wheel drive system with a limited slip differential round out the V’s mechanicals.  Bridgestone Alenza 22-inch luxury performance all-season tires lock in the grip.  Towing is maxed at 7,000 pounds.

FULLY LOADED BUT AT WHAT COST?

Visually, the V-Series changes are more subtle.  There are special front and rear fascias and some surprisingly discrete V-Series badging, otherwise it takes a discerning car nerd to pick out one of these Escalades from a distance.  The only option on my tester is the Radiant Red Tintcoat – a $1,225 upcharge paint color – leading to an MSRP of $153,815.  That’s over $40,000 more than the next most expensive Escalade V8, the Sport Platinum trim.  Making matters worse is the current retail environment that has some dealers tacking on market adjustments as high as $40,000 putting the actual transaction price over $200,000.  Or maybe that’s just a badge of honor for some?  Ditto for the 11 MPG city rating that’ll have owners pumping premium unleaded to the tune of $5,000 per year.

The Escalade has always had big presence from the outside and now it finally has that same wow factor inside.  At the forefront is a massive, yet thin, organic LED wraparound display blending GM’s intuitive tech with cutting-edge, buzz-worthy features such as the 36-speaker AKG Studio Reference audio system powered by three amplifiers.  Setting a new bar for in-car audio, it’s an absolute showstopper. 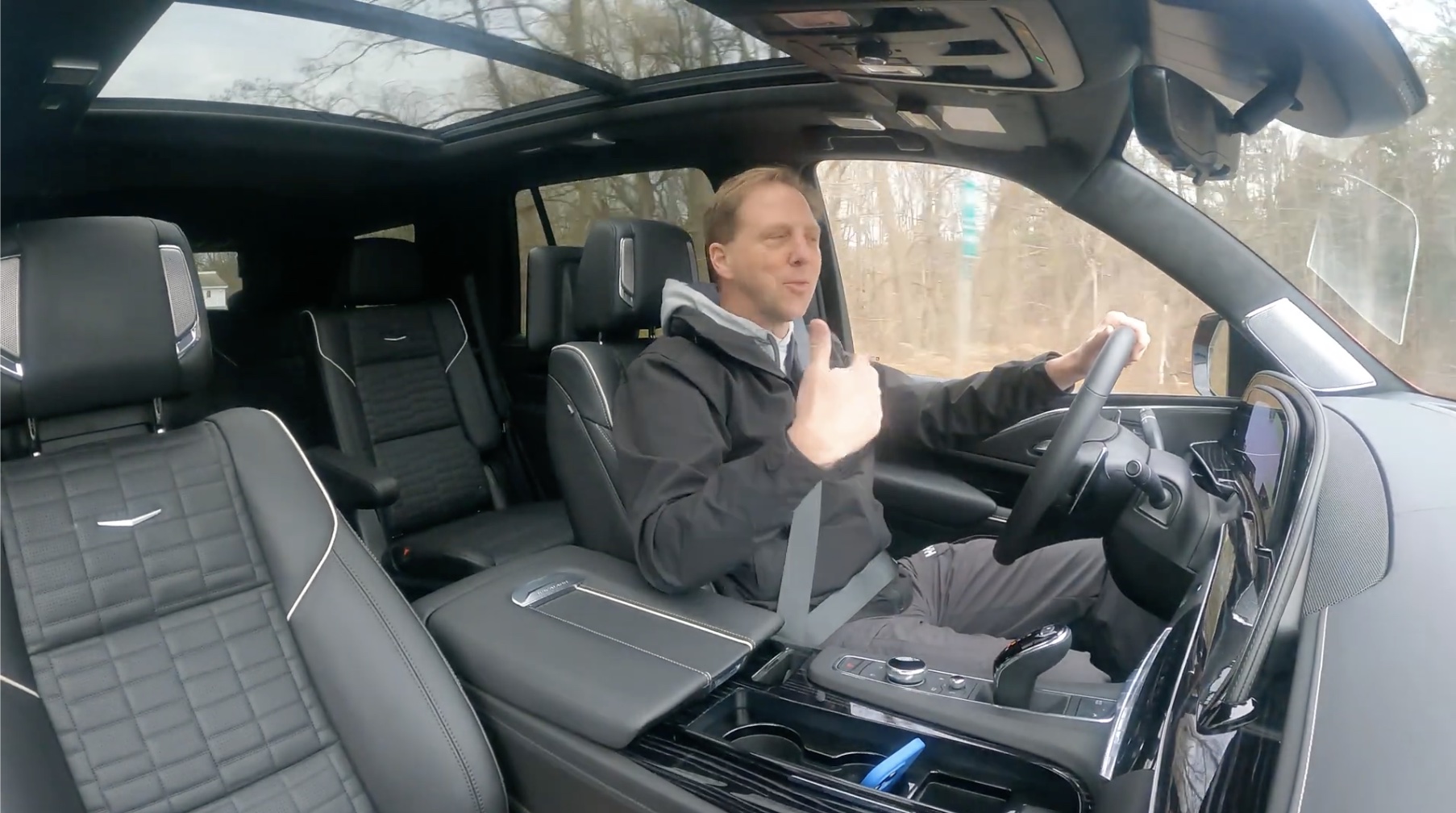 Other noteworthy goodies such as an augmented reality navigation system, night vision, and an amazing 360-degree camera ratchet up the extravagance.  The front seats include massage programs, there’s a rearview camera mirror, wireless phone projection, and a very smart and modern rear seat entertainment system that facilitates sharing content from screen to screen as well as sending navigation suggestions to the driver; the kids will love this.  And how about a refrigerated center console that also has a freezer setting?  Pretty cool.  Super Cruise hands-free highway driving is an option but with late availability.

The liftgate can be opened by pressing the Cadillac crest or with a kick of the foot and includes a separate button for the rear glass.  There are power folding 2nd and 3rd row seats and remember; if you need even more room the ESV model provides an additional twenty cubic-feet of cargo room.

It takes a special kind of person who’s willing and capable of spending this kind of money on a 682-horsepower SUV – an iconic symbol of American excess.  But those who choose to get to experience GM’s flagship body-on-frame SUV like never before.