What’d you do if you’re a car company that wants to resurrect a dormant sports car nameplate but you no longer build fast cars?  One option is to outsource the job to an expert. 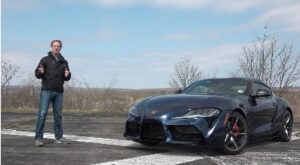 The last new Supra was sold here over 20 years ago just as I had started my car review career.  But alas, we missed each other.  So until this week I had never driven the hallowed Supra.  But I did drive the all-new BMW Z4 last year and so my introduction to this car felt rather familiar.  Why? Because as part of a 2012 agreement between the Japanese and German automakers a sports car was born.  BMW’s is a drop top while Toyota’s is a coupe.  Now, I am a convertible guy but the Supra’s styling has it all over the Bimmer roadster. 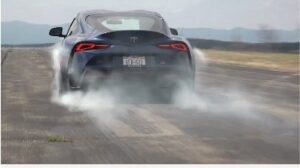 I mean this car looks like it just jumped off of a teenager’s sketch pad…and I mean that as a compliment.  Its slick, almost cartoonish appearance is the sports car we imagined designing when we were kids and the hat tip to Supras of the past found in the deatils is very cool.  But after that, Toyota’s involvement here is murky at best.  And you know what?  The Supra is so good I don’t really care.  For about $56,000 Toyota is selling a fully stocked 2-seater that’ll leave you longing for another backroad blast. 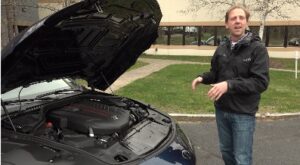 The BMW inline-6 is a great engine and fits the Supra perfectly.  Its power delivery is so immediate, effortless and smooth that you’d never guess it was a turbo.  It makes less horsepower than in the Z4 but you won’t miss it; paired with the industry leading ZF 8-speed, it’s very fast and super satisfying to drive. 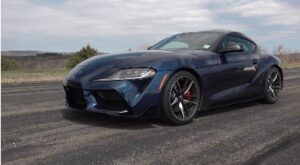 Toyota’s official stats sheet lists its output at 335 horsepower and 365 pound-feet of torque but it may actually be higher.  Off the line, it’ll capture 60mph in about 4 seconds with the use of launch control while the Sport mode soundtrack fires off its gear change revelry. 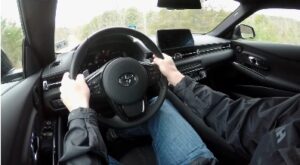 I love using the paddles on roads like this to extract the most emotion and control.  The transmission is brilliant so I’m not missing a stick shift here. 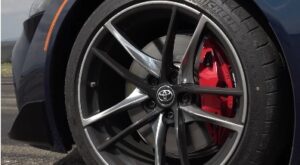 And the contribution made by these Michelin Pilot Super Sport tires can’t be minimized.  I have never driven a high-horsepower, rear wheel drive sports car with this level of control and grip.  The Supra embraces the novice and expert driver alike with varying degrees of playfulness delivered in a safely exploitable way.  If you put this thing in a ditch then you really did something stupid. 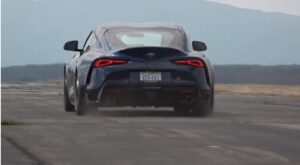 Out here in a private, controlled environment the Supra is endlessly entertaining with the traction and stability controls turned off.  But, the drive home is much more relaxed than you’d think…sure, the wide tires and low body create some noise but in normal mode it’s pretty quiet and the adaptive suspension feels content soaking up normal road imperfections while the drivetrain is right at home simply cruising.  And as a bonus it returns 26mpg on premium…considerably better than a Highlander. 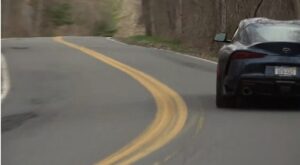 There’s a Lexus-level lacquer to the way the Supra drives that distinguishes from its BWM counterpart and I really like it.  It superbly walks the fine line between Gazoo and chill.  It’s also a car that doesn’t need a racetrack for its driver to have fun and feel confident while doing it.  A simple Sport mode button ratchets up the excitement while still keeping it glued to road.  And with hugging seats and a sumptuous suspension tune you can drive it for hours without fatigue. 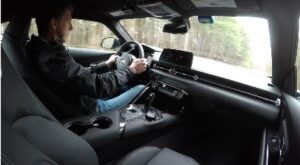 I noted that the Z4 had grabby brakes…that’s not something that plagues the Supra.

There’s just about zero in here that indicates you’re in a Toyota and that’s not necessarily a bad thing.  Much like the various mechanicals of this car that wear BMW stickers, just about everything you see and touch is also straight out of Munich.  It kind of leaves you scratching your head as to how “Toyota” this Supra really is. 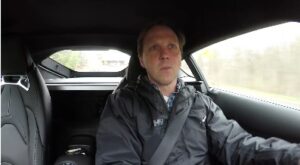 If I was a Supra devotee, which I am not, I think the lack of Toyota here would rub me the wrong way. Instead, I approve of the Supra’s cabin.  The uplevel Premium trim with the optional Driver Assist Package gives you everything you need and more while presenting as slightly less busy and simpler than the Z4’s interior layout.  But why do Toyota’s video screens all look so dim? 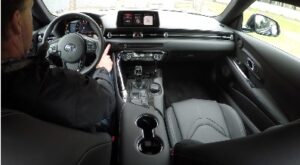 They’re not very easy to see and though I like the touchscreen functionality with wireless CarPlay, I’d prefer Toyota’s latest system over BMW’s infatuation with hieroglyphics.  This phone tray is also cumbersome to access.  Visibility can be challenging so a 360 degree camera would also be a nice option.  And there’s a heads-up display which I appreciate…just wish it contained more info for Sport mode.  Can you travel in it?  There’s certainly enough room back here but there’s no outside button to open the hatch.  Just don’t drive with the windows down or your ears will pay the price for the pressure imbalance. 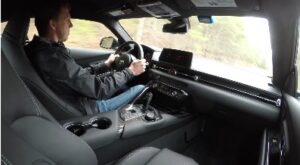 Sometimes, the long awaited return of an icon can result in disappointment.  But not here…this Supra isn’t just good, it’s great.