From the $15,000 Versa to the $115,000 GT-R, Nissan’s lineup covers a lot of ground but 3 models do most of the heavy lifting: Rogue, Altima and Sentra and for the latter its redesign is long overdue but well worth the wait because this 2020 Sentra is an absolute success. 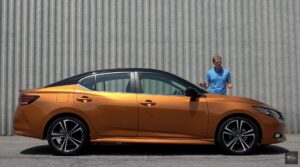 Before SUVs took over the world, the compact sedan segment was hugely important.  Just think of some of the historic nameplates like Civic, Corolla and Focus.  As for another significant entry it’s been 35 years since the first Sentra rolled off the line in Tennessee, going on to become the best-selling Nissan of all-time. 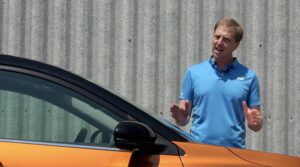 I’ve now tested 5 generations of Sentra and this one is far and away the most remarkable.  From a company going through a firestorm of upheaval, mergers and overhaul, born is their most pointed car in years. 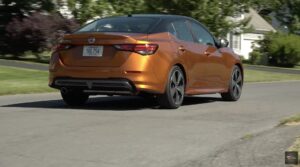 As you know, I don’t normally spend much time on design but this Sentra is so attractively styled that even 7 days into my loan I’m still looking over my shoulder at it each time I step out.  No doubt this 2 tone orange with black roof option plays up the beautifully sculpted body…a $595 extra that I would consider a must have.  This car has taken on a baby Maxima stance and exudes a lavishness that belies its fully loaded sticker price of $25,825 including destination.  That’s a lot of attitude for the ante. 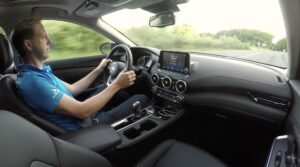 So what’s new? A  lower, wider stance, more comfort with the use of Nissan’s trumpeted Zero Gravity front seats, and a generous grouping of standard safety and driver assist technologies though not ProPilot Assist – the brand’s semi-autonomous system. 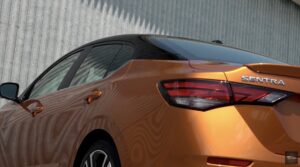 The engine gets bigger, too, dispensing with the base 1.8-liter 4-cylinder and transitioning to a more powerful 2.0-liter motor producing 149 horsepower and 146 pound-feet of torque mated to the latest version of Nissan’s CVT which behaves just as well if not better than any on the market.  Gas mileage of this top-range Sentra SR is 32mpg in combined driving; 33mpg if you opt for the lower S or SV trim.  The new independent rear suspension, electric power steering and vented disc brakes cumulatively add to enhanced handling, stability and ride comfort. 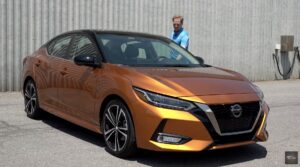 I admit, I wasn’t expecting much here but the Sentra drives with a light, agile, sophisticated nature that gives it that premium touch. There’s connected steering, a forgiving but communicative suspension and a CVT that I promise you’re going to like – it’s that good.  Plus, the new engine provides some welcome responsiveness. 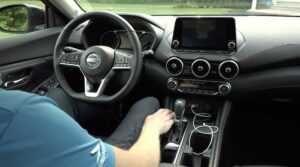 It’s no sports sedan – at least until Nissan spices it up with future variants – but this Sentra possesses an enviable fusion of upmarket driving dynamics and segment-forward intangibles that’ll leave you impressed.  For example, Active Understeer Control is a brake-based system that enhances the feeling of neutral handling during cornering and the transmission has built-in shift points that better align its actions and sounds with a traditional automatic.  It’s a job very well done. 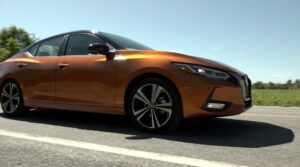 This is the best Nissan I’ve tested in quite a while. The strong styling complimented by the 2 tone paint has huge presence, the drive is elevated above its class and the combination of size and features for the the dollar makes it a top pick in the segment. If you want to ding the Sentra in any one area it might be in the staid interior design but these seats are supremely comfortable, driver interfaces are easy to use and it’s very very quiet. 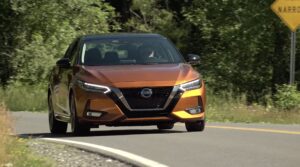 My SR is equipped with the $2,170 Premium Package which groups together a number of features I’d really want such as the Around View Monitor with conveniently placed external button, heated seats and steering wheel, the 8-speaker Bose sound system and the thin-type LED headlights. 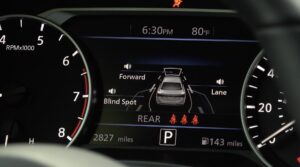 Also along for the ride is a sunroof, a power driver’s seat, and leatherette surfaces.  I like the animated and well-stocked driver information display and the infotainment unit, though extremely basic, is an easy to use touchscreen conduit for your smartphone.  No wireless charging is available.  The touchpoints feel of higher quality and the cut of the windshield is squared off and very VW-like for excellent visibility.  There’re even auto high beams, dynamic cruise control and lane departure warning – just not lane keep assist.  Inside the center console there’s a switch for the interior ambient lighting which glows in the cup holders and foot wells and is bundled with external ground lighting for a fancy, nightlife look.  And would you look at that shifter?  That’s old school simple right there. 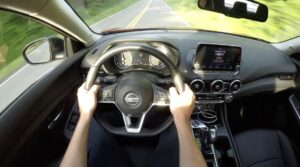 The rear seats are sculpted and not just flat benches, affording midsize spaciousness and one USB port.  Nissan did cheese out though by not putting HVAC vents back here.  And then there’s 14 cubic feet of trunk space to make the Sentra feel anything but small.  Little touches like remote start and LED fog lights complete a comprehensive package that make the Sentra a winner. 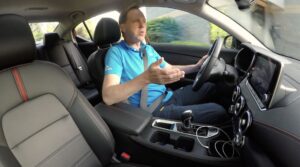 In many ways the new Sentra reminds me of the equally excellent Kia Forte.  The compact sedan segment may have had some of its glory stolen in recent years but the choices have never been better and Nissan’s latest is right there at the top.