When the Defender’s 67 year production run ended in 2016, it had already been nearly 2 decades since one could be found in a U.S. Land Rover dealership.

The 1997 Defender 90 with its 4.0-liter V8, 4-speed auto and 13mpg was a British-born Jeep rival.  But since, Land Rover’s SUV lineup has trended more towards afternoon tea and less to morning fox hunts.  The Defender’s much anticipated return is about ready to recapture some of the original’s raw ruggedness with modern day accoutrements. 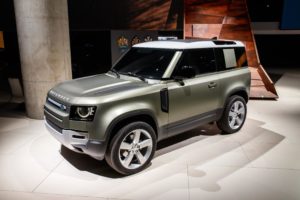 Going on sale next Spring, the 2020 Defender 110 will sticker from near $50,000 slotting it pricewise above the entry-level Discovery Sport and Range Rover Evoque.  Though the numeric designations no longer directly correlate to the vehicle’s wheelbase length, a shorter Defender 90 will follow later in 2020.

Six tailored models will be available with the widest range of accessories ever produced by the Land Rover brand.  For Defenders that will truly see off-road duty a Satin Protective Film wrap is optional for enhanced durability that can be removed at any time making it quicker to repair than standard paint finishes.

Also available is a full-length Folding Fabric Roof.  And the optional jump seat in the front is described as an occasional seat meaning the Defender 110 can be spec’d with 5, 6 or 5 + 2 seating.  The Defender P300 is powered by a 4-cylinder turbo producing 296 horsepower delivering a 0-to60mph time of 7.7 seconds while the P400, priced from the low $60ks, runs with an inline 6-cylinder engine using light hybrid electrification to produce 395 horsepower and 406 pound-feet of torque hastening its acceleration to 6.1 seconds.

Both pair to an 8-speed automatic transmission. Towing is maxed at around 8,200 pounds.  With short overhangs, strong off-road geometry, and 11.5” of ground clearance, the aluminum unibodied Defender rides on a fully independent suspension with permanent 4-wheel drive and a 2-speed transfer case with locking rear and center differentials, modern Terrain Response controls, and standard Wade Sensing showing the driver the depth of water under the vehicle.

Built in Slovakia, the Defender’s return is nearly complete.