If you’re into 4-wheeling, then you know that not all off-roading is the same.  So while the Trail-Rated badge graces Jeep 4X4s after they’ve proven themselves in 5 critical categories, this first-ever Desert Rated Jeep operates under a different set of criteria. 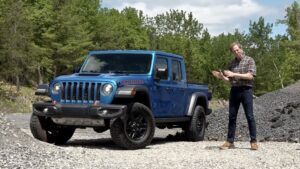 I’ve been to the Mojave Desert but it’s about a 40 hour drive from here so my jaunts are taking place in more typical Jeep environs where things generally happen slowly. But Jeep says this is the ultimate in high-speed off-road capability while traversing sand.  That’s a pretty specific skillset to which, unfortunately, I cannot speak.  But that doesn’t mean I haven’t been able to get up some speed while experiencing what this new suspension is all about. 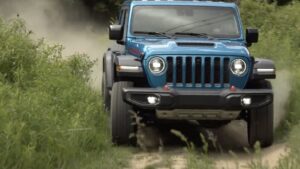 And of course, I’ve been putting it through the normal rock and mud rigors for which Jeeps are famous. 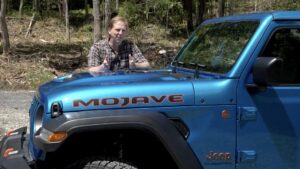 The Mojave is designed for a high-speed, sandy environment so it’s not as concerned with water fording and articulation as it is ride control and stability and desert prowess. 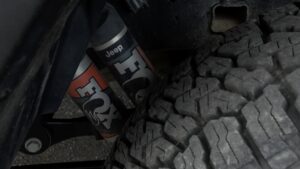 Hydraulic jounce bumpers allow you to use every bit of suspension travel without harsh bottoming while FOX shocks with external bypass can withstand incredible punishment. 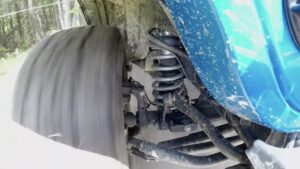 There’s also a reinforced frame, a 1” lift in the front, stronger axles and steering knuckles and 33” Falken all-terrain tires.  Muds are optional. 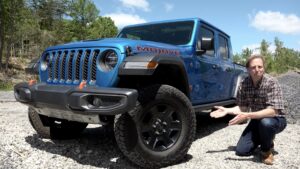 There’s also a half-inch increase in the track which gives this Gladiator a boss stance but a truck like this is all about the suspension; how it’s engineered and how much it handle while it’s flying down the trail, keeping the driver in control.  These reservoirs keep the fluid cool and thus resist fade after prolonged use…kind of like a good set of brakes. But honestly, I’m not sure I can tell much difference at least out out here between Mojave and a Rubicon.  Both are amazingly talented at keeping the wheels on the ground and the roof facing the sky, even while traversing rutted, high slope gravel like this.  Ground clearance tops 11.5”, there’s a 45 degree approach angle and a low speed crawl ratio perfect for the rocks. 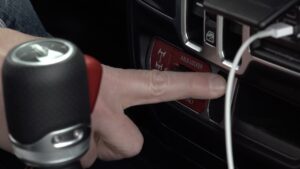 There’s also this Off Road + button which is one-stop shopping for getting everything in order.  In 4 Low, the engine and transmission calibration become focused on rock crawling and controllability with a more aggressive brake lock differential tuning at slow speeds. 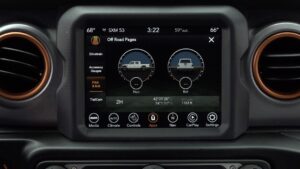 In 4 High the Mojave is setup for elevated speeds with traction and stability control turned off.  And later in the model year, you’ll even be able to lock the rear axle at high speeds. For now, it’s only available in 4 Low. 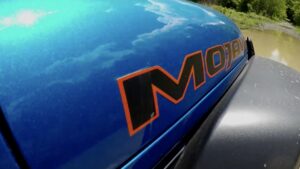 In my neck of the woods the Mojave doesn’t make a ton of sense simply because we don’t have that kind of terrain. Our off-roading is more about slow going narrow trails and mud and not speed. That being said, since when does owning any Jeep like this come down to a rational decision? I’m sure for most Mojave owners it’s simply about having one badass truck. 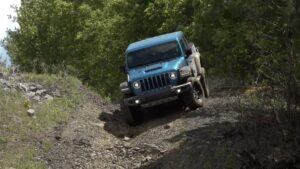 Priced from about $45,000 and positioned between the Overland and Rubicon, the Mojave is powered by a 285 horsepower V6 with either a 6-speed manual or 8-speed auto.  Fully loaded like this with every goodie you can get, the MSRP lands at $61,315.  And now you’re wading into Ford Raptor money which is a bigger, far more powerful truck with similar suspension. 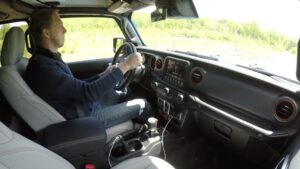 Like the Rubicon or any other truck with big off road tires the Mojave is less on-road friendly and the V6 feels as though this is as much weight as it’s willing to take. You know what would be fun to really put this this Jeep in Raptor territory? A HEMI. 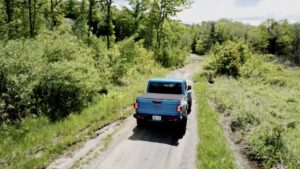 This Gladiator has a very complete, high-end feel with tons of cool features like the Off-Road Pages and little touches that show that Jeep sweats the details.  This one even has adaptive cruise control, auto high beams, a headliner in the hardtop, all the safety tech, leather and class leading infotainment with deep reserves of features. 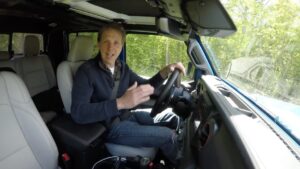 Check this out – the off-road cams can even be cleaned right from here.  The only thing is that you still have to press a button on the key fob to get inside otherwise this is cleverness personified with underfloor storage, a roll up tonneau cover and a multi-stage, damped tailgate.  Just keep in mind that it’s a big step up inside and these optional rock sliders with step assist don’t provide much meat to place your foot. 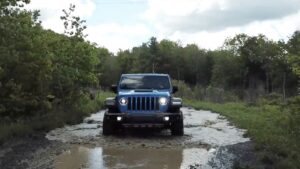 Rated at 19mpg in mixed driving with a very truck-ish ride quality and requiring near constant steering corrections I wouldn’t relish driving the Mojave on an everyday basis but its off-road chops and coolness levels are on point. The Wrangler pickup is a compelling small truck option but it’s small and pricey while the Raptor is far more user friendly but gets even pricier. 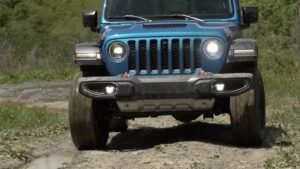 Anyone who likes Jeeps would love to have this one in their garage for those doors off, windshield down, top removed kind of days…just ask Siri where the nearest desert is.