Posted on June 9, 2019 by Auto Critic Steve Hammes — No Comments

The small ATS sedan and Coupe have already exited the.  The midsized CTS ostensibly becomes the all-new CT5 compact sedan when it arrives early next year joined by an even smaller 4-door called the CT4. And at the larger end of the spectrum the XTS is slowly being phased out while the CT6 has been given a reprieve from GM’s big car chopping block. 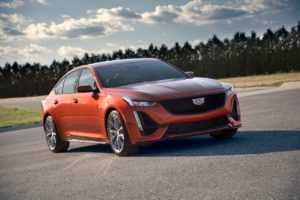 The first-ever CT5-V builds on the precision-focused details of the all-new luxury sedan introduced earlier this year to offer elevated road performance and an engaging driving experience.

In summary, Caddy’s sedan lineup is being reduced to 3 core models, each available in new V-Series livery that also is taking a new path.  Adopting the same formula as their German rivals, the new 2020 CT4-V and CT5-V will be faster and performance oriented but not to the level we’ve become accustomed to.

The new strategy will be to offer 2 V-Series versions per car – one with more go and the other with all-out, track-readiness. 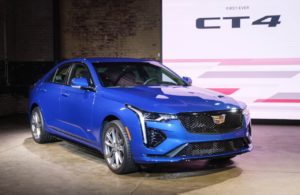 These are the mid-performance cars:  the CT4-V offers 320 horsepower and 369 pound-feet of torque from its 2.7-liter turbo-4 while the CT5-V runs with a 3.0-liter twin-turbo V6 going to 355 horsepower and 400 pound-feet of torque.  Both share Magnetic Ride Control shocks and V-Series drive modes, available in rear- or all-wheel drive with a 10-speed automatic transmission, Brembo front brakes, mild electrification and limited slip differentials.

And moving down from the flagship CT6 is Cadillac’s awesome, hands-free driving Super Cruise technology.

Previously announced and already sold out, the CT6-V is the first to arrive this summer with the heralded Blackwing twin-turbo V8 with true V-Series performance of 550 horsepower and 627 pound-feet of torque.